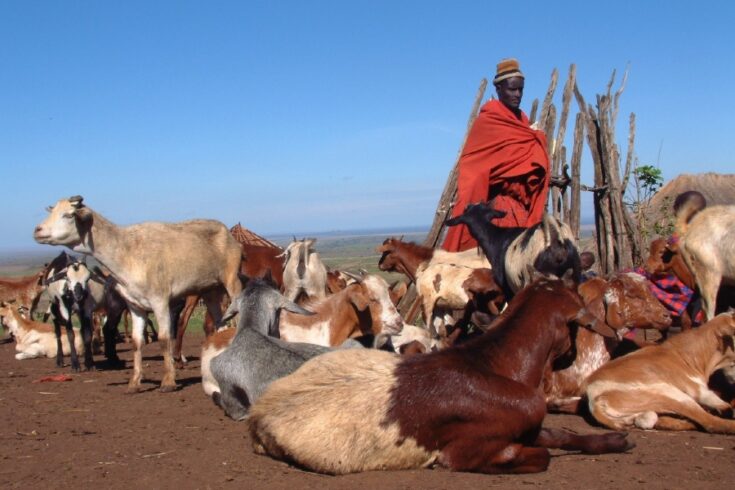 Research led by the University of Glasgow found new links between climate change and zoonoses, along with human health, social and economic impacts.

Zoonoses, or zoonotic diseases, are infectious diseases that occur when a pathogen such as a virus or a bacterium jumps from an animal into humans. As well as threatening human and animal health, zoonoses affect livestock production, causing economic and social harm to communities.

The Zoonoses and Emerging Livestock Systems (ZELS) research initiative supports interdisciplinary research on zoonotic diseases in low to low-middle income countries. It focuses on the transmission of diseases between livestock species and humans.

ZELS is funded by:

ZELS supported the Social, Economic and Environmental Drivers of Zoonoses (SEEDZ) project, which was based in Tanzania and led by principal investigator Professor Sarah Cleaveland.

Building on more than a decade of research in the sector, SEEDZ focused on three zoonotic diseases: brucellosis, Q fever, and Rift Valley fever (RVF). It investigated the environmental, social, and economic drivers of change in Tanzanian livestock systems, such as the increasing frequency of droughts or the conversion of rangeland into cropland.

By tracking these changes, SEEDZ aimed to understand if and how these changes affected the risk of zoonotic livestock infections, as well as how those zoonotic infections are related to human disease and wider social and economic impacts.

“In Africa 10 years ago, almost every fever was considered to be malaria,” said Professor Cleaveland. “Even though malaria has been declining, fever is still a very common presenting syndrome. Colleagues at the Kilimanjaro Christian Medical Centre set out to do a study on what is causing fever.”

“They found about 60% of people seriously ill with fever were clinically diagnosed with malaria, but less than 2% actually had malaria. A third of the illnesses were caused by zoonotic infections linked with livestock, including Q fever, brucellosis, and leptospirosis.”

Before SEEDZ, Sarah and colleagues had set up a project called BacZoo, focusing on the impact and social ecology of bacterial zoonoses in northern Tanzania. BacZoo was jointly funded by the BBSRC and National Institute of Health (NIH) through the Ecology and Evolution of Infectious Disease Programme.

BacZoo investigated the transmission of Q fever, leptospirosis, and brucellosis and was fundamental in creating a platform for the later ZELS projects. It established pivotal internal and external partnerships and built physical infrastructure with the establishment of a zoonoses lab. It played a major part in engaging policymakers from the ministries of Tanzania, allowing for the development of ideas and the translation of findings into change on the ground.

The importance of interdisciplinary approaches to research

Professor Cleaveland noted that her team’s research shows the value of an interdisciplinary approach and drawing on different perspectives. “Key insights have come from social science and community-based research,” she said. “[This] reinforced our understanding of the links between climate change in East Africa and changes in livestock management systems.”

There’s a very large livestock population in Tanzania and a large proportion of people in the country are heavily dependent on livestock. There’s been a large-scale shift from rangelands to croplands. Pastoral people are increasingly constrained in their access to grazing land, which has been made worse by land-use policies.

The increasing frequency and duration of droughts and extreme weather in East Africa is widely documented. When droughts occur, they now last for longer and have huge impacts on livestock, particularly on cattle which are less able to survive droughts than sheep or goats. As a result, people who would have preferred to keep cattle are now relying more on sheep and goats.

“When you see changes in host species, such as going from cattle to sheep, and changes in the way they’re moved and managed, you are very likely to see changes in the risk of disease transmission,” said Professor Cleaveland. “We need to be prepared to detect and respond to those changes.”

During the study, the SEEDZ team flagged a disease, locally named ‘ormilo’, which causes brain cysts. “It’s a well-known small ruminant disease to vets, but nobody had any idea of the scale and its importance,” she explained. “We confirmed that the vast majority of these cases are caused by the parasite Taenia multiceps, causing massive losses – 25% of sheep and goats on average. We don’t know yet if it is an important human health problem, but it is a really important livestock disease and food security issue.”

The team developed a public engagement campaign for ormilo, advising livestock owners not to feed sheep brains to their dogs, preventing the spread back to sheep via dog faeces.

After the engagement campaign, the SEEDZ team found an increase in brains being burned instead of fed to dogs, plus a decrease in reported cases of ormilo, over the course of a year.

Heavy rain and flooding cause a massive increase in mosquitoes, which carry RVF and spread the virus to livestock. Humans become infected by either interacting with livestock, such as handling foetal material, or by mosquito bites. RVF epidemics are characterised by high rates of cattle abortion and nearly 100% mortality in new-born cattle. In humans, RVF can cause an influenza-like illness, a haemorrhagic fever with liver issues, encephalitis and vision damage.

“For the first time, we detected an outbreak of RVF in a peri-urban area of Tanzania – where rural country meets the urban city outskirts,” said Professor Cleaveland. “It’s normally associated with pastoral cattle or small ruminants, but this one was in dairy cattle. We also found the infection in milk, which is significant because public health guidelines do not often highlight milk consumption as an important risk factor for human infection. Human outbreaks are being missed because it’s a non-specific fever. We picked up on it because we were investigating livestock abortions. Climate change is likely to be an important factor. As we get more extreme periods of rainfall, we can expect more outbreaks to occur, and as the mosquito vectors adapt to urban habitats, the populations at risk are also likely to expand.”

Read Gathering the puzzle pieces: the impact and social ecology of bacterial zoonoses in northern Tanzania (BacZoo) on the University of Glasgow website.

Read Trend of Growing Season Characteristics of Semi-Arid Arusha District in Tanzania on the Canadian Center of Science and Education website.

Read about Rift Valley Fever on The World Organisation for Animal Health website.

Read Classification and characterisation of livestock production systems in northern Tanzania on the Public Library of Science website.

Top image:  Livestock systems in Tanzania have shifted from cattle to goats or sheep, including for the Maasai who traditionally only keep cattle. Credit: SEEDZ team, University of Glasgow.