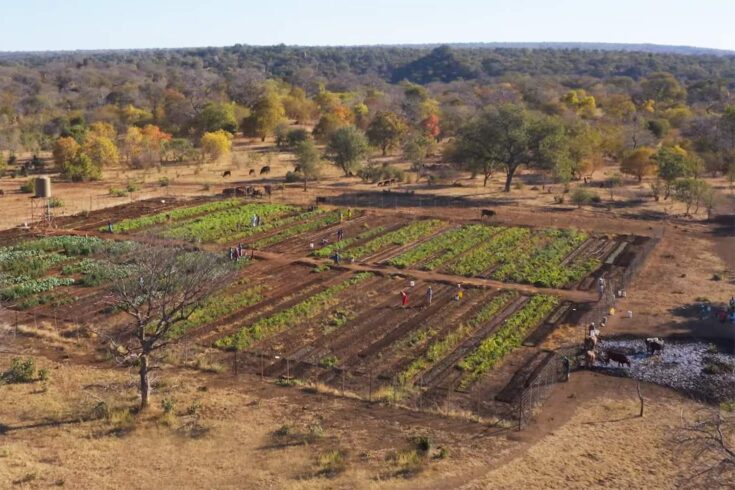 The Uganda Agriculture Insurance Scheme now protects more than 225,000 smallholder farmers against the risks to their livelihoods posed by drought, pests and poor quality seed. It also boosts productivity by providing smallholders with the confidence to invest in their farms.

The scheme is underpinned by Professor Arjan Verschoor and Professor Ben D’Exelle’s research exploring how smallholder farmers in eastern Uganda perceived financial risks, and whether this influenced decisions to invest in productivity-boosting technologies such as fertiliser, seeds and irrigation.

The research by professors Verschoor and D’Exelle’s team built on more than two decades of systematic and sustained grassroots research among 3,000 local farmers, as well as farmer organisations, agricultural service providers and district agricultural officials.

The team found that existing insurance – which paid out only after a drought had occurred and which often failed to pay out at all – was deeply unpopular.

“In eastern Uganda there is a chance of drought once in every six years as well as risks from erratic rainfall, locust attacks and counterfeit seed,” Professor Verschoor points out.

“Smallholder farmers who take out a loan to improve their farm are playing Russian roulette, with a one in six chance that they can’t pay back the loan and will lose their land and their livelihood,” he explains. “Until recently farmers did not trust insurance to cover those risks, trapping them in poverty due to under-investment leading to low agricultural productivity and, ultimately, food insecurity.”

The research has led to big improvements to insurance for farmers in Uganda, which also have the potential to be realised in other developing countries.

The researchers proposed using satellite images in providing insurance against drought and erratic rainfall, offered together with certified seed and pesticides to take care of the risks posed by fake or damaged seed as well as pests.

As a result, the government of Uganda established the Uganda Agriculture Insurance Scheme (UAIS) in 2016. This subsidises insurance bundled with other products (such as good quality seed) and services (such as loans) to promote agricultural investment.

The scheme encouraged a consortium of 11 insurance companies in Uganda, called The Agro Consortium, to begin offering this bundled insurance. It proved very popular, with 225,000 policies sold in 2020 compared with 25,000 in 2017.

Farmers were also able to easily sign up, make claims and receive pay-outs thanks to innovative applications of mobile phone technology developed by the research team and partner Omulimisa.

From my perspective, [the new] agriculture insurance is beneficial to us farmers because it enables us to borrow money from financial institutions and invest in farming without worrying.

A typical smallholder farmer with one acre of land earns on average £100 a year from selling about 10 bags of maize. Now, potential loss can be covered by a premium of just £5, with rapid payment based on satellite identification of inadequate growing conditions.

One further attraction of the scheme is that farmers no longer need to rely on their neighbours for support if ill fortune occurs. Fear of exposing other farmers to risk had previously been a factor holding back investment.

George Shangi, a farmer in the Bulambuli district’s Bunamwamba village is enthusiastic:

From my perspective, [the new] agriculture insurance is beneficial to us farmers because it enables us to borrow money from financial institutions and invest in farming without worrying. When you borrow money to invest in farming and there is a drought, you lose twice; you lose the crops, and you have to sell one of your assets to pay the money you borrowed. But if you have agriculture insurance, it will pay the money you borrowed.

More than 1.5 billion people in the developing world live in poor smallholder farming households fearful of uninsured risk. “Our research shows how insurance can be designed to help farmers better cope with risk, so that they can confidently invest in their farms, increase productivity and help bring about food security,” says Professor Verschoor.

Lessons from this research are transferable on a global scale. “What we discovered is that insurance needs are highly contextualised,” Professor Verschoor explains. “Risk factors vary from place to place. But, with a deep understanding of local risks, we have a model that could be adapted to offer insurance packages that lead to increased smallholder investment, and a safe route out of poverty in other developing countries around the world.”

Professor Arjan Verschoor and Professor Ben D’Exelle are winners of the Outstanding Business and Enterprise Impact category in the ESRC Celebrating Impact Prize 2020.

Read about supporting agricultural investment in Uganda on the website of the Development and Economic Growth Research Programme (DEGRP).