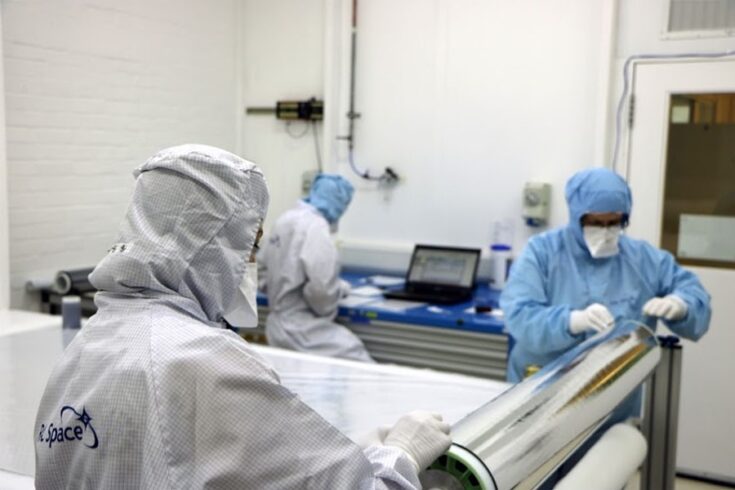 The skills of three women whose talents are normally sewing and crafting are in demand for making thermal blankets for satellites in a space lab.

Multi-layer insulation (MLI) is thermal insulation comprising a number of thin sheets of aluminium foil and spacer layers. It is used in satellites, space instruments and ground-based test facilities to protect against extremes of temperature.

The MLI facility at RAL Space has designed and manufactured blankets for many important scientific missions, including:

RAL Space had a growing number of customers requiring MLI expertise, but had issues recruiting staff with the right skills to keep up with demand. Making thermal blankets requires practical skills, nimble fingers and the ability to think three-dimensionally, all of which are used by people engaged in crafts.

According to MLI facility manager Edward Jones, the team had looked at the recruitment process from an engineering viewpoint. However, when they focused on the skills required for the job, they realised they needed people with experience in crafts. With this in mind, they reworked the job advert.

The three women eventually recruited were not researchers or scientists. Angela Ashill had been running a card-making business at home and was looking for a change of career. She had previously worked as a radiographer which, with her craft experience, gave her the confidence to apply for the job, even though it was nothing like she’d ever done before.

Claire Morgan, who had been a registered childminder and learned to sew and bake for family and friends, wanted interesting work to fit around family commitments.

The third team member, Kim Morgan, thought the job looked ideal for her as it involved making stuff. Her interview felt very technical, but once she saw the cleanroom where the blankets were made, she knew it’s what she wanted to do.

The new MLI team recruits quickly got to grips with the technical nature of the job.

The engineers give them a pattern and set out what they want to achieve, and the women work out the stages of putting everything together. They have to be very precise, and confident that the blankets will work when they need to.

Every kilogramme launched into space costs thousands of pounds, so everything has to be weighed and cut accurately. There can’t be any stray fibres or bubbles in the tape because the trapped air would expand and it would come apart when the spacecraft is in a vacuum.

The three women all take pride in their work and gain great satisfaction from it. They enjoy the responsibility of creating a unique product and seeing it through from start to finish, and find the thought of their blankets being sent into space inspiring.

Working in the cleanroom of a laboratory has also benefited life at home, with new skills gained at work proving helpful in their crafting efforts.

RAL Space is looking forward to increased business for the space blankets, as well as growing interest from beyond the space sector. This includes government investment of £100 million in a new state-of-the-art satellite testing facility at the Didcot facility.

The UK Space industry generates £13.7 billion for the UK economy each year and employs more than 38,500 people across the country. The industry is growing at a rate of 6.5% per year and there are ambitions to capture 10% of the £40 billion global space market by 2030, meaning thousands more jobs.

The RAL Space website has more information about its MLI facility and other space research and technology developments.