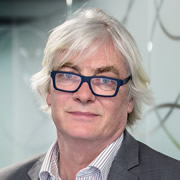 He was founder and Director of the NERC Centre for Polar Observation and Modelling (CPOM) from 2000 to 2005, which among other things discovered the widespread mass loss from the West Antarctic Ice Sheet and its origin in accelerated ocean melting. He was instigator and Project Scientist of the Esa CryoSat-1 and CryoSat-2 satellite missions.

He was first appointed as NERC Chief Executive in 2012.