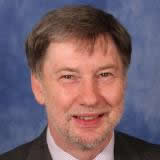 David Sweeney is Executive Chair of Research England – a new council within UK Research and Innovation which will be taking forward the England-only responsibilities of HEFCE (the Higher Education Funding Council for England) in relation to research and knowledge exchange.

Research England will create and sustain the conditions for a healthy and dynamic research and knowledge exchange system in English universities.

After gaining First Class Honours in Statistics at the University of Aberdeen, David worked at two BBSRC research institutes, as a consultant statistician, then developing mathematical models of plant growth.

His work on the computational aspects of this led into broader applications of IT in education and research, and he was Director of Information Services at Royal Holloway, University of London, before moving into university leadership as Vice-Principal (Communications, Enterprise and Research) in 2004. In this role he was responsible for research strategy and for developing Royal Holloway’s research-led commercial and consultancy activities.

He joined HEFCE in 2008 as Director (Research, Innovation and Skills) and led the development and implementation of the first Research Excellence Framework including the new impact agenda element. He is currently responsible for research policy and funding, knowledge exchange and university/business relations.

David has been invited to visit many countries to advise on research assessment and funding, particularly with respect to research impact.