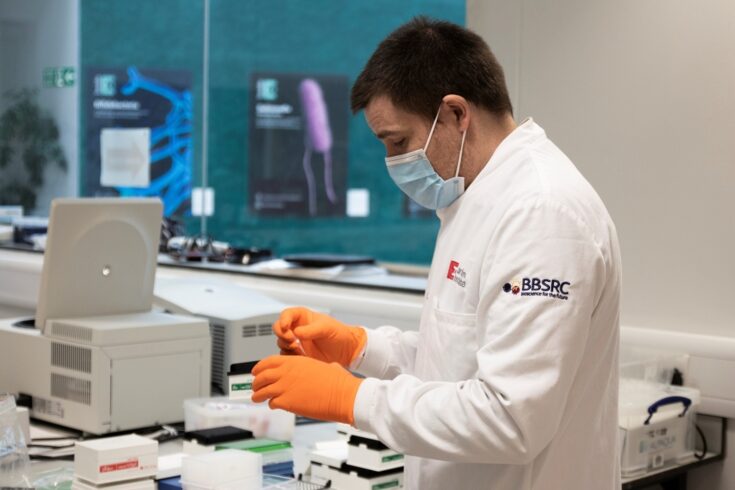 Pilot study in Norwich led to increased capacity and reduced pressure on hospitals in a regional testing programme.

During the summer of 2020, the COVID-19 pandemic was still in its early stages. Governments across the globe were relying on nationwide COVID-19 testing to track the spread and severity of the disease.

Students were also set to return to universities, raising concerns over how this might affect the number of people getting the disease.

To address this worrying situation, institutions across Norwich Research Park collaborated on a pilot study called the Norwich Testing Initiative (NTI). One of those institutions is the Earlham Institute (EI), a research institute focused on exploring living systems by applying computational science and biotechnology.

The pilot aimed to test whether an asymptomatic testing programme could be implemented and effective for universities and similar institutions. The institutions that took part in the study included:

The project team anticipated that the student environment would be a problem for the pandemic by the autumn. So, they ran a pilot over the summer, testing staff from the university and Norwich Research Park.

“Before the vaccines, testing and distancing were the only defences people had against COVID-19,” noted EI’s director, Dr Neil Hall. “My feeling was that we should be exploring asymptomatic testing to prevent spread in response to increasing numbers.”

The pilot used a quantitative polymerase chain reaction (qPCR) lab-based test, which is extremely accurate. “It’s the gold standard of NHS testing,” explained Sarah Cossey, the Director of Operations at EI. “If you go to one of the drive-in centres because you’re symptomatic, that’s the test you get.”

The pilot was ambitious and successful, with a low rate of false positives and a higher than expected test uptake of 85%. It carried out more than 3,000 tests on around 800 Norwich Research Park staff and students. Despite using a central lab, the turnaround time for results was as low as five hours and the majority of tests completed within 24 hours.

EI was established in 2009 as a national facility to advance bioscience research through genomics. It is now host to four UKRI-BBSRC National Capabilities, providing the UK bioscience community access to tools, technology and expertise. This infrastructure smoothed and accelerated the process of setting up a centralised lab for NTI’s qPCR tests.

EI is the coordinating office for ELIXIR-UK, part of a trans-European data infrastructure for life sciences. It houses datasets and provides resources and tools for analysis, allowing researchers to collaborate and agree on best practices. EI also hosts a Galaxy Node – a biomedical data analysis platform that is coordinated with other resources in the ELIXIR infrastructure.

The Galaxy team at EI organised a hackathon to develop tools for analysing COVID-19 data. Neil Hall explained that researchers could use the platform by analysing variant sequences to see where particular strains may have come from. They can also model three dimensional structures of proteins to look at the vaccine targets.

“All the people who are tracking different variants or looking at escape mutants must have the tools, processes, and storage available to be able to do that. That’s the point of e-infrastructure, such as ELIXIR and Galaxy.”

The UK had a shortage of reagents during the NTI, which began to limit testing rates. To avoid a potential slowdown, the team at the Norwich Research Park designed an alternative test that did not rely on the reagents.

Through the support of the NTI project and its partners, NNUH never ran out of lab capacity or staff and could offer testing to the hospital and region when needed.

The methods of the pilot were shared globally to enable other research organisations to support their regions in a similar way.

Following the valuable lessons learnt from the NTI, the Department of Health and Social Care contracted EI and NNUH to provide loop-mediated isothermal amplification (LAMP) testing.

Together with other partners across the park, they built a local programme. EI used their available lab space to set up a dedicated facility that was operational in under eight weeks. The lab was one of the first to get up and running, adding a processing capacity of up to 35,000 samples a week.

EI also ran a Norwich Research Park volunteer drive, with over 200 volunteers from every Institute across the park offering their help.

Read Norwich Testing Initiative: COVID-19 testing resources for universities and COVID-19 one year on: responding to a global pandemic on the Earlham Institute website.

Read about the Norwich COVID-19 testing initiative pilot on the Journal of Public Health website.

Learn How Earlham Institute is tackling the global challenges of the COVID-19 pandemic.

Get further information on the Galaxy Community and Exploring and monitoring COVID-19 variants with Galaxy on the ELIXIR website.