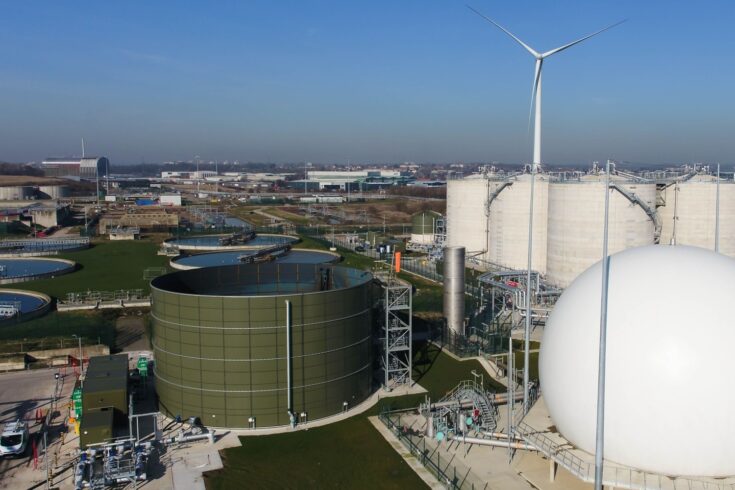 Universities and water companies come together to improve the conversion of sewage and other waste into biogas and fertilisers.

Municipal sludge feeds anaerobic digestion (AD) plants operated by Northumbrian Water and other water utilities. It could prove an even more productive source of sustainable energy than previously believed.

Samples of the sludge have been under close examination by scientists from the universities of Teesside and York, drawing on complementary research techniques in a project funded by Research England’s Connecting Capability Fund.

They hope to prove that better understanding of the microbial processes at work will allow AD plant operators to make them more efficient in generating biogas and nitrogen-rich fertilisers. Until now, any improvements have been mainly through better engineering and operational control.

Many AD microbes cannot be cultured in the laboratory. Caroline Orr, an agricultural microbiologist at Teesside University, has spent months collecting and studying samples from six digesters run by Northumbrian Water on two separate sites.

Water companies constantly measure what is going into their plants and the quantity and quality of biogas they are getting out of them. Some is used to generate electricity and provide heat to the digesters. Any surplus, if upgraded, can be fed into the National Grid. The study hopes to make correlations between those measurements by observing the way the microbes are behaving.

“There are so many different types of microbes that the processes are complex and have been poorly understood,” said Orr. “That has led to lower productivity rates, and sometimes complete failure of an AD facility.”

James Chong, a molecular biologist at the University of York, has been focusing on the DNA sequence of microbes. He comes from a cancer biology background and has also been working with Yorkshire Water as a Royal Society Industry Fellow. “The microbiology of an AD is not a constant,” he said. “It’s a living system which is changing all the time. The efficiency of a digester can depend on factors as basic as changes in human diet from season to season.”

A primary goal is to extract more biogas from the digester. Drawing on James’s DNA sequencing, the project has been exploring the introduction of methane-producing microbes that are not normally found in the feed waste.

COVID-19 restrictions have temporarily stalled the laboratory work necessary to complete the project, but Northumbrian Water continues to give its support. Interest from Yorkshire Water, Thames Water, Anglian Water and United Utilities suggest the work instigated by the project is just getting started.