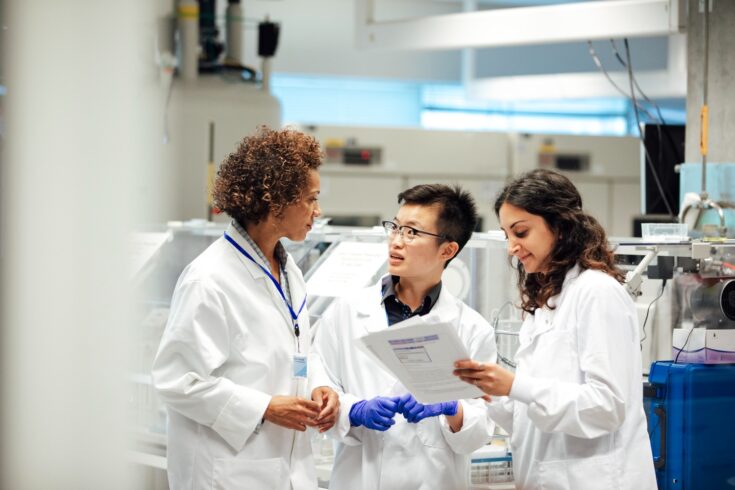 The complexities of human physiology mean that there are many components working within the body, across different scales (from molecules and cells through to tissues, organisms and our environment).

These research projects will use a collaborative approach that combines innovative techniques and technologies in new ways to link across these biological scales.

From cancer and neurodegeneration, to kidney disease and diabetes, the funding has been awarded to various institutes across the UK who will lead innovative research collaborations.

The collaborations will connect two or more teams with expertise in different and complementary research techniques or spatial scales.

MRC is dedicated to funding research that addresses some of the biggest problems in health.

These multimodal projects provide an opportunity for novel research that pushes the boundaries of current understanding of human disease.

Genes that cause abnormal growth of cells and development of cancer are called oncogenes.

Some types of viruses that can cause cancer, such as human papillomavirus (HPV), bring viral oncogenes into the cells they infect, which then cause mutations in the chromosomes, called genomic instability.

This project will aim to discover the initiating mechanisms leading to genomic instability in HPV-infected cells.

This would provide a vital step forward in understanding what causes cells to become cancerous and will be instrumental in improving early detection and treatment of cancer.

Unravelling the tissue-specific geography of protein aggregation in human disease

Led by the University of Leeds with collaborators at Newcastle University.

Islet amyloid polypeptide is a hormone secreted alongside insulin, but aggregates into amyloid fibrils that are found in the pancreases of over 90% of people living with type 2 diabetes.

The aim of this project is to develop a new technology that can:

The researchers will integrate molecular discoveries into an atlas of traditional pathology markers in different regions of the organ.

This will be used to try to:

Led by University College London, with collaborators from The Francis Crick Institute.

It is highly variable in presentation and progression but the reasons for this remain unknown.

To bridge this gap, researchers will map the mechanisms of disease progression across multiple biological scales, from cells to circuits, in the same individuals.

Through this, they will provide an accessible framework with applications in many other human diseases, that will help deliver more individual-specific treatments to slow or prevent disease progression.

Led by The Francis Crick Institute with collaborators at:

Patients who receive a kidney transplant often develop an immune reaction against it, which may eventually cause the organ to stop working.

This project aims to explore the early and late stages of the immune reaction, with the ultimate goal of increasing the lifespan of transplanted kidneys.

This will be done by studying human biopsy tissue in detail with a range of high-resolution tissue imaging technologies, including:

The data will be integrated using machine learning.

This is the first time such a comprehensive low to high-resolution analysis spanning multiple data types will be attempted.

Led by Imperial College London, with collaborators from:

Idiopathic pulmonary fibrosis is an incurable disease of the lung caused by the progressive build-up of scar tissue which destroy the air sacs.

Normal lung is like a sponge but this scar tissue produced by the cells of the lungs makes them small and stiff and more like a brick, making breathing very difficult.

This consortium will bring world-leading experts in:

They will use a range of techniques to understand whether the way the air sacs clear damaged cells goes wrong, leading to stiffer air sacs and in turn causing more injury to the lung.

Detailed understanding of these processes will be able to develop completely new strategies to investigate and treat it.

MICA_multimodal analysis of the pathophysiology of bronchiectasis

Led by University of Cambridge.

Bronchiectasis is a chronic lung disease, characterised by permanent damage to the airways leading to repeated bacterial infections that drive inflammatory lung damage.

The cause of the majority of cases of bronchiectasis is unknown.

This research aims to combine genetic analysis with models of the lung we can examine in the lab (called ‘lung-on-a-chip’) to understand why bronchiectasis occurs and how we might treat it.

Led by Cardiff University, with collaborators from:

This project will focus on epilepsy patients. Initially those with highly localised abnormalities in the structure of the brain’s outer layer (‘cortex’), called ‘focal cortical dysplasia’, most of whom do not stop having seizures even after medication.

Surgical removal of the abnormal tissue often leads to fewer seizures but in 20 to 30% of cases they remain, mostly likely due to undetected changes in the brain.

This highly multidisciplinary project will, for the first time, examine the same samples of tissue from the brains of pre-surgical patients and after surgical removal, with the most advanced microscopes available to date. It will use some of the world’s most powerful MRI scanners.

Using the latest in artificial intelligence techniques, the project team will track back from a cellular level to whole organ level.

They aim to identify new MRI tissue signatures that could uncover mechanisms of disease that have previously been hidden from view on conventional MRI.