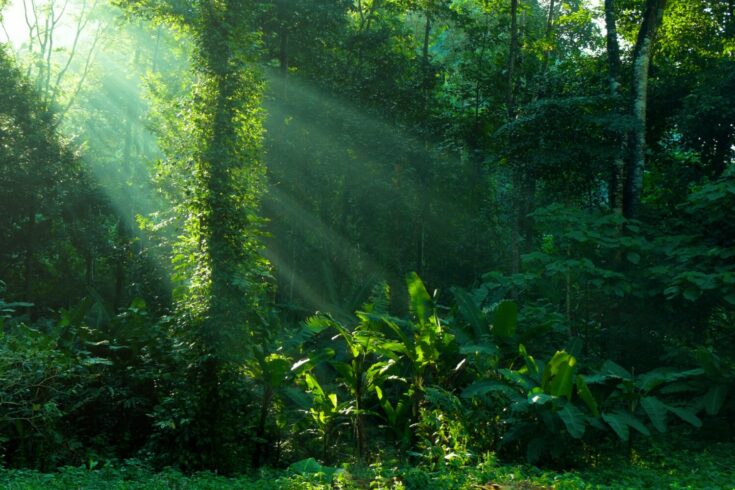 Every year, the world is losing forest equivalent in hectares to about the size of Iceland.

Losing ten million hectares of forest a year is bad news for several reasons. Trees store huge amounts of carbon while they are alive, but once they die, they release that carbon into the atmosphere in the form of CO2. This drives unprecedented global warming and climate change.

Forests are also home to about 80% of life on earth. Much of this life is now under threat. At least 8% of forest plants and 5% of forest animals are at an extremely high risk of extinction.

It is fitting, then, that the theme for the 2021 United Nations designated International Day of Forests is ‘Forest restoration: a path to recovery and well-being’. It is a day to celebrate all types of forest and raise awareness of: 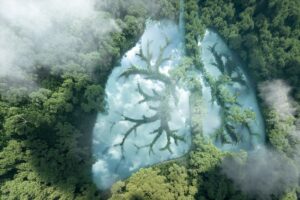 It is not just animals and plants that rely on forests for their survival. From the air we breathe to the wood we use and the medicines that keep us healthy, forests literally keep us alive. This is especially true for the 60 million indigenous people who rely on forests as their only source of livelihood.

Through funding world class research, UK Research and Innovation (UKRI) is playing a vital part in understanding and protecting the world’s forests and its wildlife. Here is just some of the work being carried out in this area.

In order to mitigate the impacts of climate change, it is vital that we know how much carbon is actually stored in forests. This enables us to track how it is changing. However, that is easier said than done. Forests are often remote and difficult to access.

Until recently, the only way we could measure the mass of trees was by cutting them down, or by using other indirect methods. As a result of the difficulties in collecting measurements, estimates of carbon contained in tropical forest may be miscalculated by as much as 45.2 gigatonnes.

Laser to the rescue

To provide a more accurate estimate, UCL researcher Dr Matt Disney used new laser scanning technology to measure the weight of some of the world’s biggest trees. This shines a light on how much carbon they absorb and how they might respond to climate change.

Using a terrestrial laser scanner (TLS) capable of firing 100,000s of laser pulses per second, Dr Disney was able to construct detailed 3D images of thousands of trees. This was in tropical forests in:

The laser is so accurate that it can measure branches to within millimetres from a range of nearly 1km. Trees can then be weighed very accurately by estimating their volume from the precise 3D data.

Using this method, Disney showed that the amount of carbon stored in forests is actually 20% higher than previously thought.

The laser used in the research was showcased as part of a BBC documentary on Dame Judi Dench’s garden. Scanning uncovered a 200 year old oak estimated to weigh about 25 tonnes. The laser counted over 260,000 leaves, which is equivalent to the area covered by three tennis courts. The work included funding from the Natural Environment Research Council (NERC). 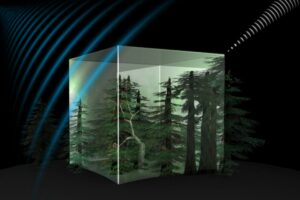 Another project aiming to improve measurements of carbon contained in forests cover is the BIOMASS satellite, soon to be launched by the European Space Agency.

The satellite will, for the first time, create 3D maps of the world’s forests, measuring the weight of the wood held within them from space. It will also measure the height of the trees and make an accurate map of the terrain they are standing on. This will provide vital information for monitoring how deforestation and reforestation are affecting the global climate.

Funding by NERC allowed scientists to find the best wavelength for the satellite. It needed to be one which was just right to measure trees while allowing data to pass uninterrupted through the ionosphere, an atmospheric layer of the earth.

Trees absorb up to 3 billion tonnes of carbon from the atmosphere each year, which equates to one third of anthropogenic carbon. However, trees are only able to suck up CO2 if they have free and easy access to nutrients in the soil.

If mature forests were unable to access the nutrients they needed in the future then we would have to reduce our CO2 emissions by an even greater extent to avoid the most serious consequences of climate change.

Scientists in the NERC funded QUINTUS project have created a living laboratory to find out how rising atmospheric CO2 will affect forests’ ability to absorb nutrients and store carbon. Over a 10 year period, researchers are exposing swathes of mature oak woodland in Staffordshire to the CO2 concentrations that the planet is likely to experience by 2050. The project is part of a global collaboration, with a similar site in Australia and one in the Brazilian Amazon.

Read about the QUINTUS project (University of Birmingham). 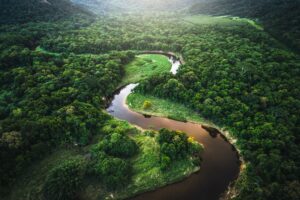 Forests are home to an incredibly diverse array of wildlife and plants. The Amazon rainforest alone is home to over three million species, including:

UKRI researchers are playing a vital role in protecting this rich flora and fauna. For instance, NERC fellow Dr Cristina Banks-Leite has devoted herself to saving the forests of her homeland in São Paulo. One of the most biodiverse areas in the world, the Atlantic Forest, has suffered great losses due to deforestation for agriculture in recent years.

Dr Banks-Leite’s research identified the minimum forest cover required to maintain biodiversity (30%), a threshold that has now been employed as the official target for restoration in the Atlantic Forest by the Brazilian government.

The issue of palm oil

Oxford University ecologist Dr Jennifer Lucey has conducted pioneering research that is helping to ensure palm oil plantations are sustainable and do not damage wildlife.

Palm oil is used in food products, detergents and cosmetics. The expanding market for the vegetable oil has triggered an explosion of commercial palm plantations across:

These plantations are destroying vital rainforest along the way. The problem is so bad that between 2000 and 2011, 200,000 hectares of rainforest were destroyed in Malaysia and Indonesia every year. This was to make way for palm oil plantations.

As a result, a lot of effort has been put into encouraging farmers to grow palm oil sustainably. However, until recently, growers could label their palm oil as sustainable. This was as long as they didn’t plant on pristine forest, but instead used degraded rainforest and set aside areas of high conservation value for protection.

Research has shown, however, that even very degraded rainforest can be vital for biodiversity and carbon storage.

Dr Lucey’s research showed that the minimum size needed for a conservation set aside on a plantation to effectively support biodiversity was 200 hectares. This finding was used to develop new industry standards which have been adopted by many of the largest oil palm growers and have been applied across millions of hectares of land.

These projects are just some of the many examples of work in this area, and the research continues.

A brand new programme called The Future of UK Treescapes will build an understanding of the type and scale of woodland planting and forest that will be needed in the UK. The aim is to significantly improve the environmental, socio-economic and cultural understanding of the functions and services provided by having trees on our UK landscapes.

This will inform decision making on the expansion of future treescapes for the maximum benefit for the environment and society. The programme is led by NERC and jointly funded with the Arts and Humanities Research Council and the Economic and Social Research Council.

The variety of projects here demonstrate that achieving forest restoration, the theme of this year’s International Day of Forests, needs a collective effort from researchers and innovators looking at the problem, literally, from all angles.

Read about The Future of Treescapes project (NERC).