Using art to engage people with the climate crisis 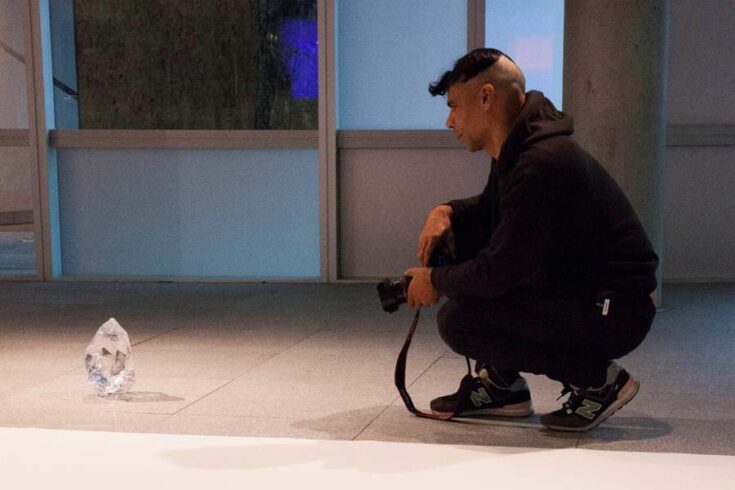 Artist and sculptor Wayne Binitie drew on ice-core samples from the British Antarctic Survey to create art that explores the changing glacial atmosphere.

A glass sculpture containing Antarctic air from the year 1765 – the dawn of the Industrial Revolution – formed the centrepiece of an exhibition at the United Nations COP 26 Climate Conference in November 2021.

Created by artist, sculptor and Arts and Humanities Research Council (AHRC) PhD student Wayne Binitie, the Polar Zero exhibition at Glasgow Science Centre was seen by thousands during the conference. The exhibition involved collaboration between AHRC, the British Antarctic Survey (BAS), Arup and the Royal College of Art (RCA).

Wayne, a PhD student at the RCA, began a collaboration with BAS in 2015 following an expedition to Jökulsárlón, a fast-receding glacial lagoon in Iceland, two years before. His experience of encountering glacial water in its raw state brought into focus the urgency of climate change.

“The scale and mass of the icebergs suggested a fixed solidity that belied their extreme volatility and unpredictability,” explained Binitie.

The Polar Zero exhibition formed part of Wayne’s work that draws on BAS’s ice core laboratory, which stores cylinders drilled from ice sheets or glaciers. Within the ice, tiny bubbles of air are trapped, offering scientists information on the atmosphere from the past to measure and predict climate change.

The exhibition also featured two other pieces alongside the glass sculpture centrepiece. ‘Ice Core’ was a floor-to-ceiling column of ice that slowly melted while recordings of glacial gases popping and escaping played. ‘Ice Stories’ displayed the words of climate scientists working in the polar regions etched into concrete.

For Wayne, the ice core laboratory is a repository of scientific and cultural data that reflects humanity’s engagement with, and intervention in, the polar regions. It enabled him to uncover hidden histories embedded in the ice, and engage people with these narratives by producing contemporary artworks.

“The exhibition came at a time that seemed more urgent than ever to understand the human and non-human history of the polar regions, and asked what it means to touch and be in touch with the Earth,” said Binitie.

Together, these works reflected the multisensory experiences of glacial waters, their different states, as well as the contrast of permanence and impermanence. The artworks were a different way of presenting scientific data, noted the artist.

The exhibition is accompanied by a programme of public and government engagement, as well as media and social media activity, to stimulate new ways of thinking and express the impact of climate change on humanity. The aim is to encourage a better understanding of the world around us and encourage consideration of our past and present interactions with it.

See Wayne Binitie’s website for selections of his art and details of his research.