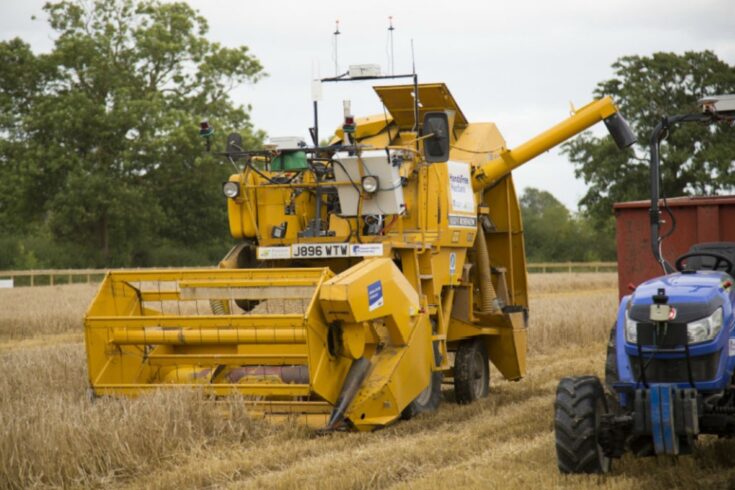 For the first time, a crop has been planted, tended and harvested using only autonomous vehicles and drones.

Harper Adams University and York-based Precision Decisions have announced the successful completion of the ‘Hands Free Hectare’ project. It aimed to be the first in the world to bring a crop through its lifecycle untouched by human hands, using only drones, self-driving tractors and other autonomous vehicles.

Modern agricultural machines have been getting steadily bigger over the years to increase efficiency. But bigger and heavier machinery brings new challenges, such as more compacted soil which hinders plant growth. Larger spraying and harvesting arrays also mean less precise farming in the field.

A number of machines were used in the Hands Free Hectare trial. A lightweight Iseki tractor did the spraying, drilling and rolling. The harvest was then completed with a Sampo combine harvester.

Field work to support decision-making was also done autonomously. Drones with multispectral and red-green-blue colour sensors were used to take aerial images of the field, while a smaller Scout vehicle was used to video at crop level and physically take samples. These were sent back to the agronomist (an agricultural analyst) to analyse and assess what chemicals to apply and where, and when the crop was ready for harvest.

All of the machinery is readily available to farmers. The Iseki and Sampo are common models, while the navigation system came from a drone. The technology is open source. Smaller machines were specifically chosen to limit the impact on the soil and to improve precision and plant health.

The whole project cost less than £200,000, funded by Precision Decisions and Innovate UK.

Innovate UK awarded just under £160,000 to support a feasibility study of the modified agriculture machinery. This helped to test the idea, prove its viability and take the project forward.

The Hands Free Hectare project successfully brought the crop through from planting to harvesting, solely relying on autonomous vehicles and drones. Using this method returned a yield of 4.5 tonnes of spring barley, against a predicted yield of 5 tonnes.

It demonstrates that an entire crop can be grown from start to finish without people ever needing to go into the field and directly work the land. The team believes it’s the first in the world to farm a crop in this way.

Building on the Hands Free Hectare project, the team has since secured funding from the Industrial Strategy Challenge Fund (ISCF) Transforming Food Production programme, and partnered with the AgriEPI Centre, one of the UK Agri-Tech Centres for Innovation, for the new ‘Hands Free Farm’ project.

The new project will develop swarm robotic skills and smart machines. Testing this technology lays the groundwork to evaluate technology development and economic studies, building the business case for robotic systems in agriculture.

Find out more about the ISCF Transforming Food Production programme.

Find out about the Agri-Tech Centres and how you can work with them on your project.