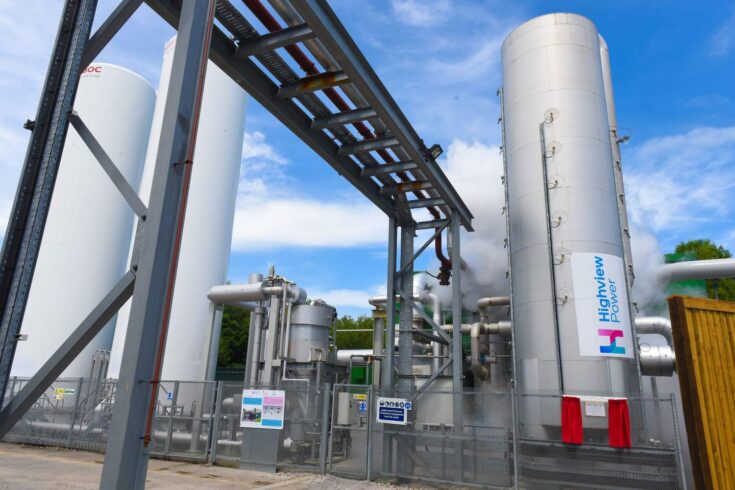 Working with researchers at the University of Leeds, Peter developed the concept of storing energy using compressed, liquified air at a temperature of −196°C.

Highview Power’s innovation lies mainly in the way that waste heat generated in the compression process is managed for reuse in the eventual discharge of the stored energy.

The business received its first grant from Innovate UK in 2012, of just under £20,000 for a proof-of-market study. Further grants from Innovate UK have helped to accelerate growth and development of the company’s liquid air energy storage technology, now called the CRYOBattery.

Increasing use of renewable power opens up a big market for the CRYOBattery, which is emissions-free. If hooked up to a wind farm, it can become more viable in periods of low or fluctuating demand. Liquid air is stored in a large insulated tank until there is a demand for that stored energy.

When energy is needed, the process uses stored waste heat from the electric compressors to turn the refrigerated air back into gas at an even higher temperature. The 700-fold expansion in volume is used to drive a turbine and generate emissions-free electricity for up to five hours.

The Innovate UK grants included £1.87 million to help convert a 5MW demonstrator into the world’s first commercial-scale full liquid air energy storage system, capable of rapid response and qualifying as a supplier to the National Grid.

Energy Research Accelerator, an energy research hub funded by Innovate UK and made up of eight Midlands universities, also played an important role. The universities helped pioneer the large-scale energy storage technology that is now being scaled up by Highview Power.

That investment has allowed Highview Power to go ahead with plans to build 20 liquid air bulk storage plants of 100MW. This year the company will begin construction of its first truly commercial-sized liquid air energy storage plant at a site yet to be announced.

SHI’s technology centre will become a hub for the CRYOBattery business, expanding the technology’s footprint in Europe, Asia and the Americas.

Highview Power now employs 45 people at its Charing Cross Road headquarters, plus six staff in its New York office and another six in Spain.