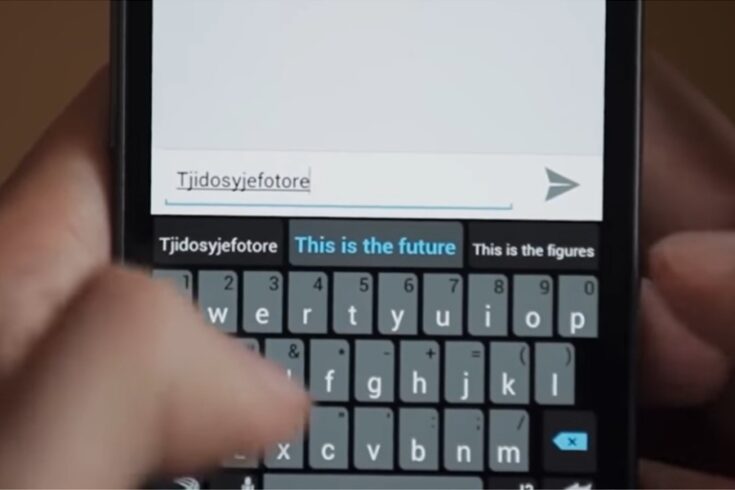 Digital start-up founded with help of Innovate UK grant has its predictive keyboard installed on more than 300 million devices worldwide.

SwiftKey came out of the need to improve typing on smartphones. The QWERTY keyboard was designed for typewriters, but has to be shrunk significantly to fit on a mobile screen. This means tiny keys that are hard to hit, making it time-consuming and frustrating to type without errors.

With the help of a £15,000 Innovate UK grant, University of Cambridge graduates Jon Reynolds and Dr Ben Medlock founded SwiftKey in 2008. The firm’s flagship product is an app that uses language technology to anticipate what the user is going to say next, reducing typing time. It also corrects spelling errors and even suggests emojis based on what the user has just typed.

The grant enabled Jon and Ben to give up their day jobs and take on SwiftKey as a full-time project, before launching the app in 2010.

In the first week following the app’s launch, the keyboard was downloaded by more than 100,000 people and the company continued to grow organically over the next two years.

SwiftKey co-founder Jon Reynolds said: “From the idea to being almost top of the App Store took us about two years. At that stage we had no real marketing, it was just people who loved the product telling their friends about it.”

In the nine years since launch, predictive keyboard app SwiftKey has been installed on more than 300 million smartphones and saved users 100,000 years in typing time.

Where SwiftKey once comprised a two-person team with an app that worked solely in English, the firm now employs more than 150 people and has offices in London, Seoul and San Francisco.

The firm’s developments in language technology led to high-profile collaborations. In 2014, SwiftKey was invited to work alongside Intel and Professor Stephen Hawking on a project to enhance Professor Hawking’s communication system. The project used the Professor’s published and unpublished works to build a personalised language model. It’s estimated this doubled Hawking’s speech rate.

In 2016, SwiftKey attracted the attention of Microsoft, who acquired the company in a deal worth a reported $250 million.

“I think the reason that the acquisition has been a great success is that they [Microsoft] wanted to take what we were doing, and help accelerate that, making the keyboard better and getting more people using SwiftKey,” says Jon Reynolds. “We now have greater resources and greater assets across wider parts of Microsoft to be able to achieve that vision faster.”

2017 saw the addition of seven new languages, as well as a new GIF search feature within the keyboard. Since completing the project, SwiftKey has added support for 500 languages, developed new search features for GIFs, emojis and stickers. It’s also introduced a cloud-based clipboard that lets you copy and paste text between your phone and laptop.

Learn more about Microsoft SwiftKey or download the app for iPhone and Android.

Top image:  The SwiftKey app anticipates what the user wants to type.