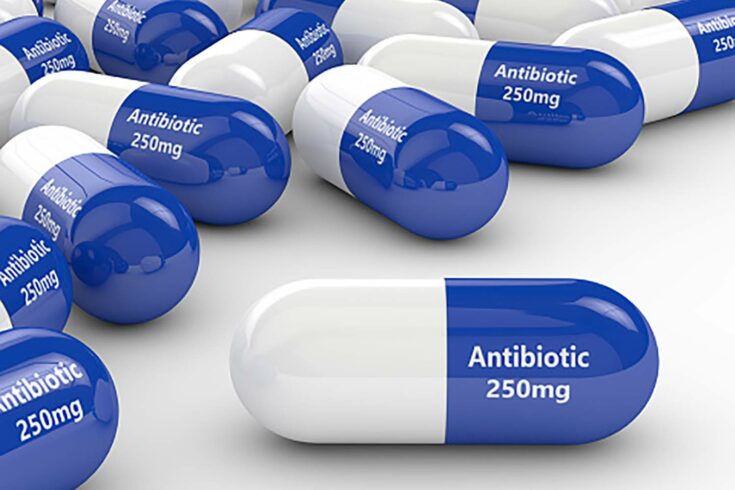 Antibiotic resistance is a major global health challenge. It needs the joint effort of researchers, doctors, farmers, vets and social scientists to tackle it.

Antimicrobial Resistance (AMR) happens when bacteria, viruses, fungi, and parasites evolve and stop responding to medicines like antibiotics. This makes infections harder to treat and increases the risk of disease spread, severe illness and death.

The World Health Organisation has said in a recent report that currently at least 700,000 people die each year due to drug-resistant diseases. This includes 230,000 people who die from multidrug-resistant tuberculosis.

Antimicrobial resistant organisms are found in people, animals, food, plants and the environment – it is a complex interconnected problem that spans hospitals and farms, from wastewater to soil.

So, it is vitally important to tackle this problem with a coordinated approach that brings together researchers across diverse fields of study. This ranges from the social and agricultural sciences to engineering and biomedical research and the humanities.

The UK is a world-leader in AMR research, supporting a huge variety of research in the field. UKRI-funded researchers across these fields and more are working together on new solutions to help us tackle this rapidly emerging threat.

The problem of over-prescription

One of the major causes of AMR across the world is the over-prescription of antibiotics.

Patients can often show up at their GP clinic with ambiguous symptoms and doctors can feel pressure to prescribe antibiotics, even for viral infections that won’t respond to antibiotics.

This can provide the ideal conditions for AMR to develop.

A company called AgPlus Diagnostics have developed a 15-minute test that can help doctors distinguish between viral and bacterial infections. This can help to prescribe antibiotics for the patients that actually need them.

AgPlus Diagnostics is supported by the UK Innovation and Science Seed Fund, a fund partnered by:

Another group of scientists are developing a low cost, rapid test that will show the susceptibility of bacteria to antibiotics within 45 minutes.

NHS laboratory testing of samples can take up to two days, and this new test will allow doctors the ability to prescribe the correct antibiotic more quickly.

Rapid tests will also help doctors by giving them the evidence they need to not prescribe antibiotics to patients, in situations where they are not needed.

The work is funded by the Medical Research Council (MRC) and based at the University of Strathclyde.

Find out more about the group of scientists on the National Archives website.

Each year, around 20 million patients around the world in intensive care need machines to help them breathe. Many of these patients are treated with antibiotics as a precaution, even when there is no inflammation.

Another way to reduce the use of antibiotics through improved diagnosis has been developed by a team led by the:

Researchers supported by Engineering and Physical Sciences Research Council (EPSRC) and MRC have developed a biochemical marker that attaches to inflammatory cells in the lungs and helps doctors detect them.

Known as the Proteus Project, this work will help to make diagnoses quicker and also reduce the use of unnecessary antibiotics.

In 2018, a study published on the Science Translational Medicine website showed that the Proteus imaging technology is safe and practical for using in patients in the clinic. It can detect infections in less than 60 seconds. 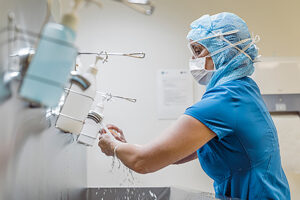 Although improving evidence-based use of antibiotics will help slow the spread of AMR, healthcare professionals also need to consider different choices to avoid spreading existing AMR infections around hospitals.

Infection prevention and control practices depend on how we perceive risk, and the way staff interact with patients in the building – awareness and design can help influence and change that behaviour.

Arts and Humanities Research Council (AHRC)-funded researchers from the Glasgow School of Art, Architecture and Design have developed a tablet-based tool.

This can help doctors and nurses ‘see’ how normally invisible bacteria can spread through indoor environments.

This means clinicians can come up with simple, effective behavioural changes such as increased hand washing to halt the spread of life-threatening infections.

Medical devices such as orthopaedic and dental implants are relied upon by thousands of us. But these ‘artificial’ surfaces can be rife with bacteria.

Currently this can be overcome by, for example, building antibiotics into these devices, but this can lead to an increase in AMR.

So, to reduce antibiotic use, researchers have come up with a special antimicrobial surface that does not rely on antibiotics.

These surfaces kill AMR bacteria by puncturing their cell walls with tiny spikes – inspired by insect wings – and have the potential to be used for next-generation biomedical devices and implants. The research is led by the University of Bristol and funded by EPSRC and MRC.

The problem of antibiotics in farming

Antibiotics are widely used in industrial farming, often as a “growth promoter” – micro-doses of antibiotics given to livestock will boost the animals’ weight and get them to market faster.

But unfortunately, these micro-doses provide the perfect conditions for antibiotic resistance to evolve because low doses are not lethal enough to kill bacteria, giving them opportunity to mutate and evolve AMR.

This AMR gene has since been reported in more than 30 countries including the UK, spanning four continents, highlighting the global scale of this problem.

By working closely with the Chinese government, the team influenced an unprecedented policy change. This directly led to the withdrawal of more than 24,000 tonnes (The Lancet website) of colistin from the Chinese veterinary sector.

This policy change has had incredible impact so far, leading to a decline in colistin resistance (The Lancet website) in both animals and humans in China. It has also led to a drop in human transmission of the colistin-resistance gene.

In 2019, India has also banned colistin use in animal feed, in line with the European Union, United States, Brazil and China.

Understanding how AMR spreads between animals and people

AMR bacteria can easily jump between species in industries like farming and veterinary practices where animals and people are in close contact.

But our understanding of how these jumps happen is limited, particularly how genes that carry AMR can spread between bacterial populations.

To address this knowledge gap, scientists at the University of Oxford are using cutting-edge genome sequencing approaches to find out the genetic features that contribute to the emergence and spread of AMR genes.

The team have catalogued a large database of bacterial genomes that acts as a rich resource for scientists all over the world who study AMR genes.

Their work has also shown that although sewage treatment reduces the amount of AMR genes in river water and river sediment, it does not eliminate the problem.

The team are now engaging with farming and wastewater management communities to develop evidence-based methods for tackling the spread of AMR in these environments.

The project is known as the REHAB (environmental REsistome: confluence of Human and Animal Biota in antibiotic resistance spread) project. It is funded by BBSRC, MRC and NERC as part of the cross-council AMR initiative.

Out of the wild

AMR is a global problem and we know that AMR can easily spread between countries through human behaviour and agricultural practices.

To stop AMR spread, we need to understand more about how such bacteria travel between animals and humans, through the food chain, and across built and natural environments.

A consortium of UK and Thai researchers are examining the drivers of AMR in the Mae Klong-Ta Chin Basin, a region selected for its diversity of landscapes, populations and land use.

Conclusions from the project, which includes funding from BBSRC and MRC will help inform better public health decisions.

Although the mechanisms that lead to the development of AMR are biological, the conditions that promote it are caused directly by human activity.

That’s why social sciences play an essential role in measuring, understanding, educating, and ultimately changing the way we approach AMR.

UK social scientists (University of Leicester website) are collaborating with an international group of researchers. They will work together to use social science theory and methods to look at the use of antibiotics in treating seriously ill patients.

They will build a model which identifies the risks, tensions, and societal factors that affect the way antibiotics are prescribed and use this to find ways to improve antibiotic prescribing.

The work is funded through the cross-council Tackling AMR Initiative and will include researchers in England, Sri Lanka and South Africa.

The UK leads the way

There’s no single magic bullet when it comes to tackling this global health issue. We will need to draw on the efforts of policymakers, clinicians and individuals if we want to see profound, long-term improvement.

But one thing is for sure: if we’re to overcome the challenges posed by AMR, we’ll need a unified approach that draws on cutting edge research and innovation.