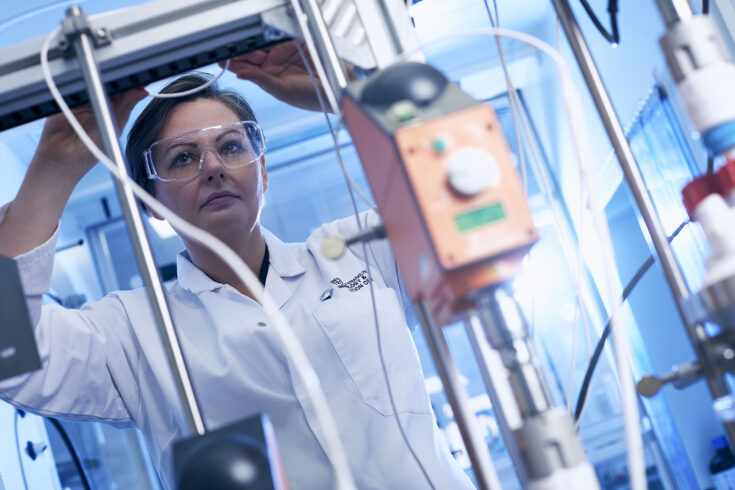 A new report highlights the importance of research investment in the latest manufacturing technologies.

In March 2020, as countries around the globe started to lock down, scientists at University of Oxford Jenner Institute were already investigating how their existing work on vaccines could be modified to tackle COVID-19.

By April that year, the first doses were trialled, and by the end of the year the nationwide vaccination programme had begun. The unprecedented speed and volume of the Oxford, AstraZeneca vaccine rollout was thanks to ground-breaking research in immunology but also, crucially, research in manufacturing.

Prior to the pandemic, the UK had long been a global leader in vaccine discovery but its capacity to manufacture vaccines at scale was limited. This was addressed in 2017, when the Engineering and Physical Sciences Research Council (EPSRC) in partnership with the Department of Health and Social Care set up the collaborative academic-industry research hub VaxHub. The aim was to improve the UK’s vaccine manufacturing capability.

During the pandemic, VaxHub was pivotal in mobilising expertise and scaling vaccine production to fight the virus.

Manufacturing innovation has a key role to play in meeting the health, environmental and economic challenges facing UK society. However, market forces do not incentivise business to invest in early-stage research and development (R&D).

According to the report, for every £1 invested in manufacturing research, £63 will be returned to the UK economy. When you consider that between 2008 and 2018 the manufacturing sector significantly outperformed other parts of the economy with an average annual productivity growth rate of 4.9%. It is clear to see how funding manufacturing research can drive future economic growth and offer a considerable return on investment.

Technological innovation and development drive productivity, and R&D is fundamental to the process. Innovative firms grow twice as fast as firms that fail to innovate. The manufacturing sector accounts for 60% of all business R&D spend in the UK, and much of this is aligned to early-stage research and skills funded by EPSRC.

A good example is optical fibres. Nothing has changed modern communications more than their development, and the knowledge base that underpins the sector can, in part, be traced back to EPSRC backed speculative research at the University of Southampton in the 1970s. Long-term investment from EPSRC since then, including through the MtF programme, has led to a pipeline of new discoveries, many of which have been commercialised.

Lumensity, for example, is a spin-out company from the Optoelectronics Research Centre at the University of Southampton. Its Hollowcore fibre based optical cable CoreSmart® allows data to travel 50% faster than traditional solid core fibre. This results in a 30% reduction in delay between nodes, data centres or exchanges, hugely valuable to sectors such as financial trading where every nanosecond counts.

Small and medium sized enterprises (SMEs) have a critical role to play in driving future growth and have significant potential to grow their productivity, with micro manufacturing firms typically having about 60% the productivity level of large firms. EPSRC-funded research is supporting the growth in capabilities of many SME manufacturers right across the UK.

For example, research on the use of ‘servitisation’ business models in manufacturing, where manufacturers enhance and differentiate their product by integrating high-value services into the overall offer, began more than a decade ago. Today, Aston University is putting this research into practice by delivering training to local SME manufacturers across the West Midlands.

EPSRC investment also played a crucial role in establishing the UK’s leadership in semiconductors. The Future Compound Semiconductor Manufacturing Hub is helping to attract public and private investment leading to regional, national and international impacts. This is led by Cardiff University, with spokes at:

The report also highlights how manufacturing research conducted in partnership with industry can propel innovation to meet many of the challenges of our times.

Cell and gene therapies (CGTs), for example, have the potential to transform medicine. It’s a fast-growing sector with hundreds of cutting-edge treatments currently in clinical trials. However, they are very difficult to manufacture at scale.

Exactmer, a spin-out from Imperial College London, is working with multinational pharmaceutical companies with the aim to make the UK the first country to manufacture a new generation of CGTs, oligonucleotides, at scales capable of treating large patient populations.

Innovation in the manufacture of energy efficient green technologies is offering the potential for significant carbon dioxide emissions savings. Solar photovoltaic (PV) has already seen significant expansion over the last decade and it is estimated current deployment will need to quadruple again by 2030 to meet net zero targets.

EPSRC funded early-stage research with the ‘PVTEAM’ project, led by the University of Bristol, to look at whether it was possible to develop a sustainable and scalable alternative to existing thin-film PV technologies.

Manufacturing of the future

One of the most pressing needs of businesses in the advanced manufacturing sector is securing talent and skills. EPSRC funding plays a vital role in training the manufacturers of the future with 550 PhD students supported between 2005 and 2020.

In addition, dedicated training is enabling students trained in the fundamentals of manufacturing to expand their skills, particularly in emerging technologies, such as through exposure to artificial intelligence and digitalisation, or by understanding changing business models within an international context.

EPSRC investment has created vibrant academic-industry ecosystems, and helped drive smart specialisation in different parts of the UK, supporting regional capabilities and economies. To build on this success and secure growth and prosperity, EPSRC has committed to invest:

The UK is an innovation nation but it needs the manufacturing sector to help deliver new technologies and medical advances at pace and at scale. Manufacturing R&D has never been more important.