The ‘Year of 4 Emperors’ told through Rome’s gold coins 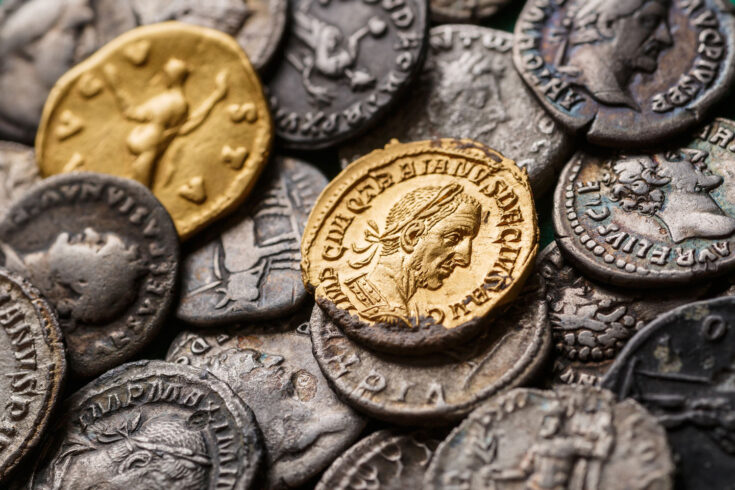 A new study has allowed the non-destructive investigation of Ancient Roman gold coins to reveal the economic chaos caused during the ‘Year of the 4 Emperors’.

The study, carried out at the Science and Technology Facility Council’s (STFC) ISIS Neutron and Muon Source (ISIS), investigated the gold content of coins issued during the civil wars of AD 68/69.

What can a coin tell us?

You can learn a lot about a civilisation from its coins. On a superficial level, the designs that embellish a coin’s 2 faces can tell us who was in charge and what their religious and cultural proclivities were at the time.

But, if you are able to look deeper – into the metals that make up the coin itself – you can learn a great deal about the economic and social conditions within the issuing state, kingdom, or empire, at the time that the coin was minted.

When minting precious metal coinages, a stable state will generally pick a purity – normally a high one – and stick with it. During times of political and economic upheaval, however, it can be tempting to mix in more lower value metals than usual, stretching the supply of gold or silver during difficult times. This process is known as debasement.

The riddle of Rome’s gold 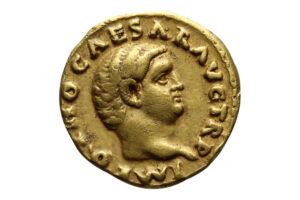 Spot the difference: these 2 coins were produced within just 3 months of each other, yet 1 coin is 99.75% (top image) pure and the other 1 is 83.7% (below image) pure. The colour is the same, because copper has been deliberately mixed into the latter 1 to darken the colour of the alloy.
Credit: STFC

The Roman Empire is famous for its longevity and relative stability for an administrative region that, at its peak, covered some 1.9 million square miles and 20% of the planet’s population. This stability was reflected in the empire’s gold coinage, with the gold content of its coins remaining relatively high until the ‘mid-third century’ crisis’ that almost culminated in the empire’s collapse.

Now, however, a new study carried out at the UK’s ISIS in Oxfordshire has revealed that the gold content of Rome’s coinage took a significant hit in AD 68/69. On some occasions the debasement was so severe the state had to mix copper into the gold to make it look darker again. These sorts of serious debasements were previously thought to have first occurred some 185 years later. 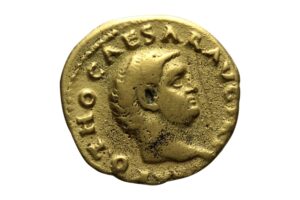 Scientists working at ISIS, together with researchers from the University of Oxford (who part-funded the research with STFC), the Ashmolean Museum, and RIKEN Nishina Center, Japan, have a developed a technique that uses muons to identify the metallurgical make-up of artefacts, such as coins, without even having to scratch the surface.

They have used the technique to study, in a totally non-destructive way, a collection of 44 gold coins minted during the civil wars of the ‘Year of the 4 Emperors’.

Previously, the research team had shown that the precious metal content of the empire’s silver coins had taken a hit during the same period and had then continued a relatively steady pattern of debasement – finally reaching levels of just 5% silver by AD 270.

But it had been believed that, while the gold content of the empire’s gold coins had wavered slightly in AD 68/69, it never really fell below 98% pure. This new study suggests that, rather than a consistent small drop, the chaos of the Civil Wars caused the gold content of Rome’s top denomination to erratically plunge.

For example, the team analysed 4 gold coins of the same design issued in a 3-month period and found that 2 were essentially full purity, 1 was slightly debased at 98.5% and the final coin was heavily debased at only 83.7% pure.

So what might have happened in the 68th year of the first millennium that would have caused the usual stability of the empire’s gold coinage to take such a hit? The answer, as is so often the case, lies in the politics of that period.

The Year of the 4 Emperors

To say that AD 68/69 was an eventful one would be spectacular understatement. The year now known as the ‘Year of the 4 Emperors’ kicked off in AD 68 when the reign of the much-maligned Emperor Nero ended in his suicide – apparently lamenting ‘what an artist dies in me’.

The first of that year’s 4 Emperors was Galba who immediately set about seizing the property of Roman citizens, executing people without trial, wielding taxation as a weapon and, most carelessly, refusing to pay his army’s wages. He lasted 7 months before he was murdered by his personal guard (a unit of the Roman army known as the Praetorian Guard).

Next up was Otho who was declared Emperor in Rome while in Germany another chap, Vitellius, was being declared Emperor by his legions. Vitellius marched on Rome and defeated Otho in a battle – after which Otho, who wished to end the civil war, committed suicide. That year’s second Emperor lasted just 3 months.

Enjoying his position as the third Emperor of AD 69, Vitellius set about attempting to bankrupt the empire by holding elaborate banquets and triumphal celebrations. Like Galba before him, he also set about assassinating his political rivals. Also like Galba before him, he was killed by the next (and final) Emperor on the list – in this case a chap called Vespasian who actually survived the year and remained Emperor until his death (of natural causes) in AD 79.

That this extraordinary level of political, social, and financial upheaval is reflected in the quality of the empire’s coinage is perhaps unsurprising but, until now, there has been no evidence that this was the case with Rome’s gold coins.

Digging deep without making a scratch

There are numerous studies investigating the precious metal content of Rome’s silver coins which, thanks to their relative abundance can sometimes be investigated by drilling samples of metal from the centre of the coin. Gold coins, however, are far more rare and valuable and so such destructive methods of investigation are rarely possible (or desirable).

This new experiment was carried out at RIKEN-RAL muon facility at ISIS, where muons are produced by accelerating protons and smashing them in a carbon target. The muons created by these collisions are implanted into the sample under study – in this case a Roman coin.

Muons are the short-lived, heavy-weight cousins of the humble electron – which orbit around the nucleus of atoms. When a muon is captured by an atom, it displaces an electron and causes the atom to emit energy in the form of X-rays.

Because they have a mass 207 times greater than an electron, muons can generate powerful X-rays that can pass back out of the coin and be detected. The X-rays are unique to the atom that emitted them – making it possible to identify the elements inside the sample.

In this way, the team were able to create chemical profiles of the coins and identify their metallic composition without physically damaging the coins in any way.

The new study has shown that, during the political upheavals of the AD 68/69 Civil Wars, the competing Emperors – on occasion – significantly debased their gold coinage in an effort to make the empire’s dwindling reserves stretch further.

For example, 1 of Galba’s gold coins struck in Spain was only 89% pure; Otho produced a coin in Rome that contained 11% silver and 6% copper; and Vespasian issued multiple coins between 94% and 97% pure.

It seems that the gold percentage was restored during the reign of Vespasian but it took several years (until about AD 74) for the last of the ‘4 Emperors’ to regain the stability of the currency. None of the coins minted after AD 74 that were tested showed levels lower 99% gold.

Rome would not see gold currency debasement of this level again until the ‘Crisis of the Third Century’ – a period so tumultuous that it very nearly culminated in the empire’s collapse.

The metallurgical evidence gathered by the team through this research shows the AD 68/69 Civil Wars caused significant and sustained disruption to the Roman economy.

This latest study also confirms the effectiveness of muonic X-ray emission spectroscopy as a powerful tool for investigating high-value cultural heritage objects without needing to damage the objects themselves. Allowing researches to build detailed metallurgical fingerprints of their interiors without so much as scratching the surface.

Top image:  Coins for illustrative purposes only and are not related to the study. Credit: IURII BUKHTA, iStock, Getty Images Plus via Getty Images