Every proposal we receive is sent out for expert peer reviewed assessment. Find out how we keep the effort between reviewers and applicants balanced, and how submitting fewer, higher quality proposals gives reviewers more time to review each one.

Peer review of research and training proposals is the mechanism guiding Engineering and Physical Sciences Research Council’s (EPSRC) investment decisions and is therefore critical to achieving the EPSRC mission and vision.

EPSRC receives several thousand proposals a year, each of which must be assessed by expert reviewers. We recognise that this is only possible if EPSRC’s peer review community continues to provide high-quality and timely expert assessment.

The sustainability of peer review depends on an equitable balance of effort between applicants and reviewers. Therefore, EPSRC has taken steps to discourage the submission of uncompetitive proposals to manage the demand on reviewers.

Since 1 April 2010, EPSRC has restricted the number of proposals that can be submitted by applicants who are repeatedly unsuccessful (based on the success of their proposal submissions over the previous 24 month period).

Applicants who are repeatedly unsuccessful over the previous 24 months are restricted to submitting one application, as either a principal or co-investigator, in the following 12 months (constrained applicants).

EPSRC considers all principal investigators equally, irrespective of whether they are from the lead organisation or not. Applicants are notified by EPSRC when one further unsuccessful submission will result in constrained applicant status.

All proposals submitted as a principal investigator through the Joint Electronic Submission (Je-S) system are taken into consideration for the calculation of applicant status except for the following:

Applicant status is determined by the success of an applicant’s proposal submissions over the previous 24-month period, and is based on two factors:

Proposals that are the continuation of an earlier proposal or outline that has been assessed by peer review and subsequently invited to a further stage of assessment are automatically counted as ranking in the top half of a funding prioritisation list.

The following flowchart illustrates how submitting a proposal affects the determination of applicant status. 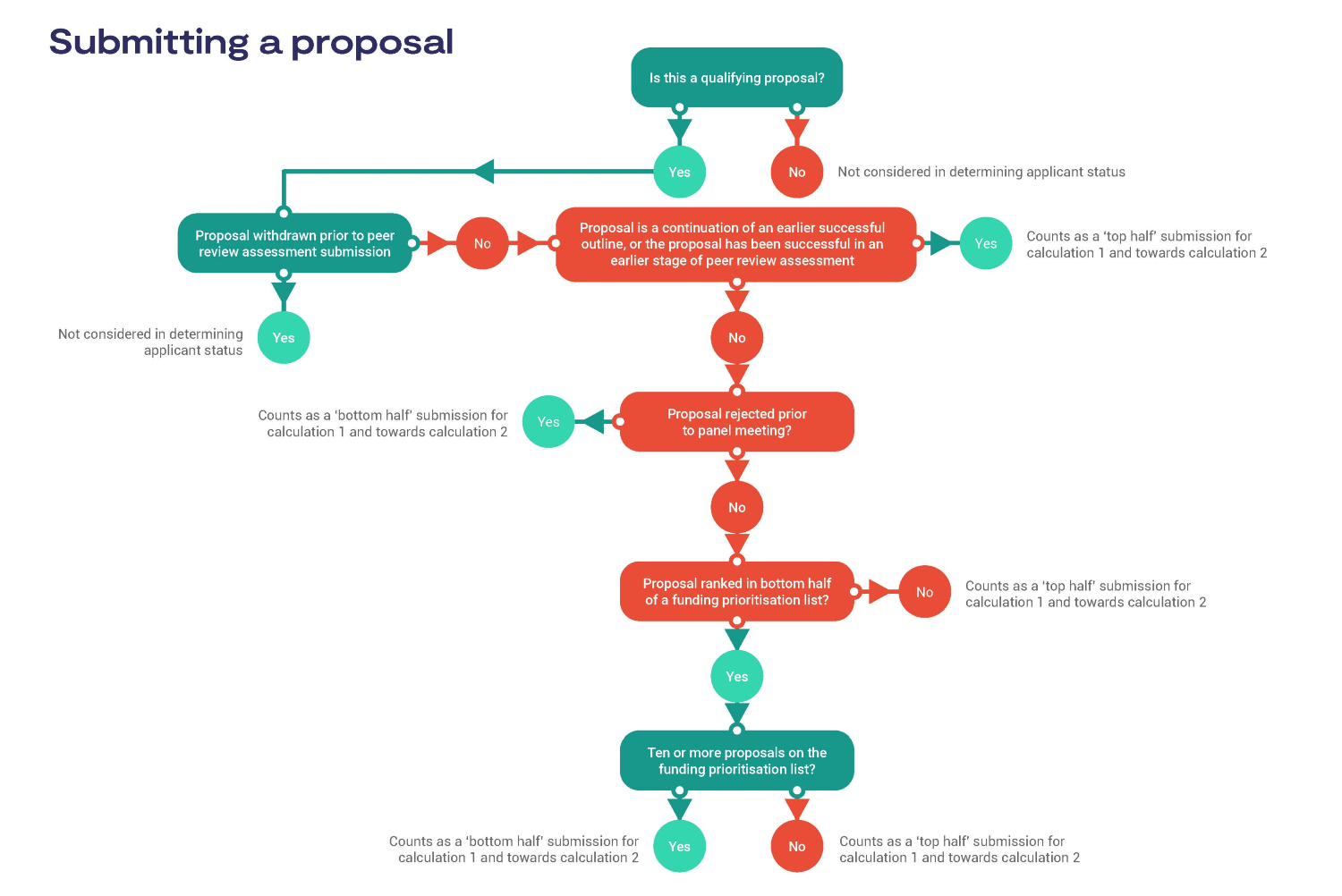 View a PDF version of the process flowchart.

For an audible description of the contents of this flowchart, visit the page that contains a Q&A video on EPSRC’s repeatedly unsuccessful applicants policy.

The calculation used to determine whether an applicant has constrained status is determined by:

Applicant status is calculated by EPSRC on a monthly basis.

Applicants and their host institutions will be informed of any changes to their applicant status by email. Applicants will also be notified by email if their personal success rate is below 25% and the submission of a further proposal ranked in the bottom half of a funding prioritisation list, or rejected before panel, will result in constrained applicant status.

Applicants who are repeatedly unsuccessful over the previous 24 months, and are placed in constrained applicant status, are defined as those who have:

Constrained applicants are only eligible to submit one application, as either a principal or co-investigator, for a 12-month period following notification of their change in status.

Constrained applicant status automatically ends at the end of this 12-month period.

However, further unsuccessful submissions may result in a further period of constrained applicant status.

How can I check my applicant status?

Your applicant status can be determined using EPSRC’s Grants on the Web. You will need the application reference number (starting ‘EP/…’) of any proposals that have been submitted to EPSRC in the past 24 months and have been either successfully funded or rejected following peer review assessment.

In order to check where your proposal was placed on a funding prioritisation list, enter your application reference number into the search box. This will provide a link to the rank ordered list of proposals (‘Rank Ordered List Panel’) from the panel that considered your proposal.

Note that unsuccessful proposals that were not considered by a prioritisation panel are not included in this data.

If you have been contacted about restrictions, but feel you do not meet the criteria then please contact the EPSRC Portfolio Manager for your research area.

If your disagreement remains unresolved, your query will be escalated to the relevant EPSRC head of theme.