Wealth from waste: smarter recycling is boosting the circular economy 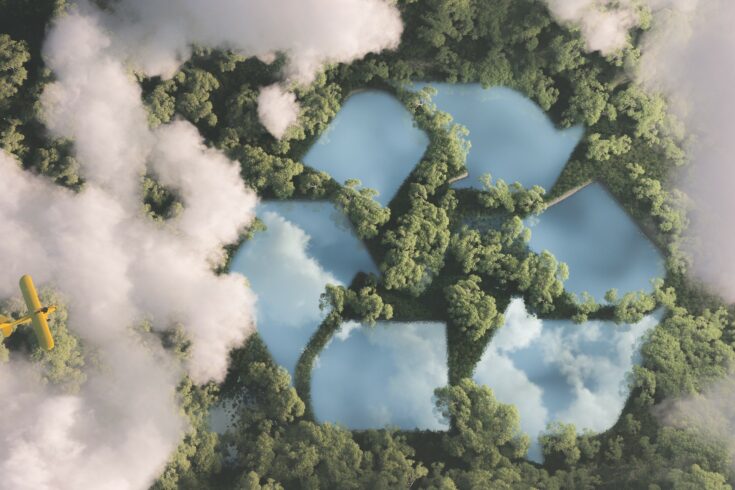 To mark Global Recycling Day, find out how UKRI-supported researchers and innovators are recycling everything from coffee grounds to CO2 to help grow a circular economy.

When most of us in the UK think of recycling, we take a familiar and important path, recycling everyday items such as:

Followed by trips to the tip, when we can, to dispose of:

We’re getting better at recycling in the UK.

According to consumer data experts, Statista, over the last two decades the household waste recycling rate has increased:

The world is waking up, too. Every year, global recycling efforts ensure that over 700 million tonnes of carbon dioxide (CO2) are not released into the atmosphere. This is projected to increase to 1 billion tonnes by 2030.

Much more to be done

But while we have some cause for celebration, there is much more we must do if we are to reset Earth’s downward environmental trajectory. Beginning with rethinking our approach to recycling itself.

It could be argued that sending an item to recycling is very similar in our minds to sending it to waste. Once it’s out of our hands, and we have washed them, we have done our bit for the environment. Put crudely, it is a one-sided transaction from which we have not directly profited.

Tearing up the rule book

It need not be this way. Quite the opposite. UKRI-supported researchers and innovators are forging adventurous and ingenious approaches to recycling in which the old laminated rule book is being torn up. Where many see waste, they see opportunity, in which recycling the waste of today into the raw materials of tomorrow is fundamental to a prosperous circular economy.

In the case of plastics, for example, UKRI supports a host of different projects to reuse, recycle and replace them.

Our wider recycling portfolio covers every facet of the economy and society, from making new clothes from food scraps and crop waste to turning old shoes into new footwear. In short, making worth from waste.

Deep Branch Biotechnology, a company formed by former PhD students at The University of Nottingham, has developed unique carbon recycling biotechnology. The biotechnology uses edible microbes to convert CO2 from industrial emissions into high-value animal food without the need for arable farmland.

When fed CO2, the microbes grow and reproduce, enabling them to be continually harvested for protein whilst maintaining a growing culture. Under optimal conditions, up to 70% of the material produced is protein.

The system uses locally-sourced waste-CO2 from a power station run by industrial partner Drax Group as part of a new bioenergy carbon capture usage and storage pilot. The technology has its roots in The University of Nottingham’s Synthetic Biology Centre, where the co-founders first met as students. The centre is funded by the Biotechnology and Biological Sciences Research Council (BBSRC) and Engineering and Physical Sciences Research Council (EPSRC).

Deep Branch’s partnership with Drax is part of a wider £24 million Innovate UK-supported investment into nine innovative projects. The investment supports the development of technologies such as, artificial intelligence and robotics that aim to improve the efficiency of food production. 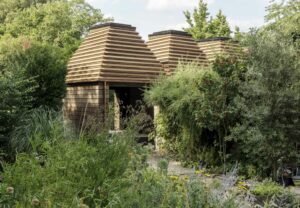 A UCL team, supported by Innovate UK and EPSRC, have created a sustainable construction material made from cork – the stuff of port bottles. The project was so successful that the cork building it led to was shortlisted for the 2019 RIBA Stirling Prize, a major UK architecture award.

While it might seem an unlikely building material, cork has impeccable credentials for use in a construction system. It is water-resistant, a good source of insulation and entirely sustainable. Cork is derived from the bark of the corn oak tree. Once it has been harvested, the tree is left intact, enabling it to keep on growing.

The award-winning construction material itself is made using natural waste from the cork bottle industry. Indeed, the entire cork house is made of plant-based materials. Watch the film.

Brewery waste could heat our homes

In an average year, EU breweries throw away around 3.4 million tonnes of unspent grain.

With support from EPSRC, researchers from Queen’s University Belfast and Oman’s Sultan Qaboos University have developed a low-cost technique to convert leftover barley from alcohol breweries into carbon.

The resulting product could be used as: 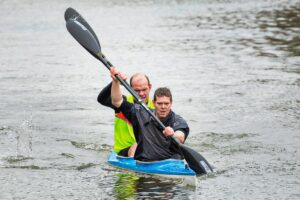 With support from EPSRC, Cranfield University professors Gary Leeke and Liam Grover entered a 125-mile canoe race along the River Thames to prove the resilience of their kayak built from recycled aerospace waste. Waste which would have otherwise gone straight to landfill.

The material for the kayak was developed in the lab using a process developed by Leeke called solvolysis. Through this process they were able to create a light, extremely strong and hardwearing vessel measuring just 2-3mm thick.

The kayak functioned perfectly. Unfortunately, its pilots fared less well, and were forced to withdraw from the race after 85 miles of paddling against a raging gale and huge tides. 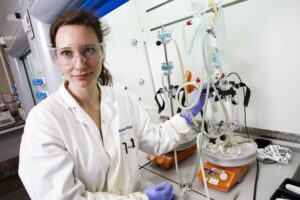 In the EU and US alone, around 100 million tonnes of waste wood remain unrecycled every year. This represents a vast economic loss and an untapped resource.

In 2017, the year of Lixea’s formation, Florence Gschwend, (pictured) the company’s chief technology officer, was named in Forbes magazine’s 30 under 30 in science and healthcare. The award came just months after she had completed her PhD under the supervision of Dr Paul Fennell and Dr Jason Hallett. Dr (now Professor) Hallett co-founded the company with Gschwend and Dr Agnieszka Brandt-Talbot.

Coffee waste could be turned into electricity

Around 160 million kilo-bags of coffee are produced annually worldwide. This may be good for our caffeine fix, but it causes a huge problem in coffee-producing countries, particularly where the infrastructure doesn’t exist to process the waste.

With funding from BBSRC and EPSRC, researchers at the University of Surrey together with Colombian scientists, have created technology based on a microbial fuel cell that converts waste from coffee production into electricity.

Microbes inside the fuel cell degrade the organic matter in the waste, breaking it down while also generating electrical power.

Researchers at the University of Edinburgh, supported by ESRC and EPSRC, have developed an award-winning solar-powered lamp and charger that can be:

Built in partnership with Edinburgh-based design agency Cramasie, the device, called Solar What?!, is aimed at families in low-income countries who do not have access to mains electricity. Available as an open-source design, it is powered using mobile phone batteries and charged from a range of second-hand solar modules.

Around 100 billion litres of bioethanol fuel are produced annually from raw materials such as fermented cereals. A Nottingham Trent University team found a way to extract a high-value liquid protein from the cereal bi-product of the bioethanol production process that would otherwise have been sent to landfill. The team received support from:

The team developed a process to separate protein from yeast in the waste cereal. The process showed that this protein contained nutrients which can then be used in chicken feed and fish feed.

The research project was so successful that the liquid protein extracted during the process essentially becomes the most valuable component, more so than the bioethanol.

Every year around 50,000 buildings are demolished in the UK, generating 45 million tonnes of waste.

When a structure is demolished and another built on the same site, it is normally impossible to reuse the existing foundation piles because their condition is unknown.

This challenge led to a ground-breaking project commissioned by construction group, Skanska, involving researchers from the Cambridge Centre for Smart Infrastructure and Construction, an Innovation and Knowledge Centre funded by:

The researchers cored into the foundation supports of a London office block under demolition. They then inserted optical fibre-based sensors to measure the strain the foundations could absorb. This produced key evidence proving that the existing piles in the foundations were able to take the loads.

By reusing the existing foundations, Skanska:

Learning the value of waste

Recycling is integral to a circular economy, and these are just some of the examples reflecting UKRI’s investments in this growing and vital area. While not exactly making money from old rope, the researchers and innovators we support are changing the way we think about, and value, our waste.