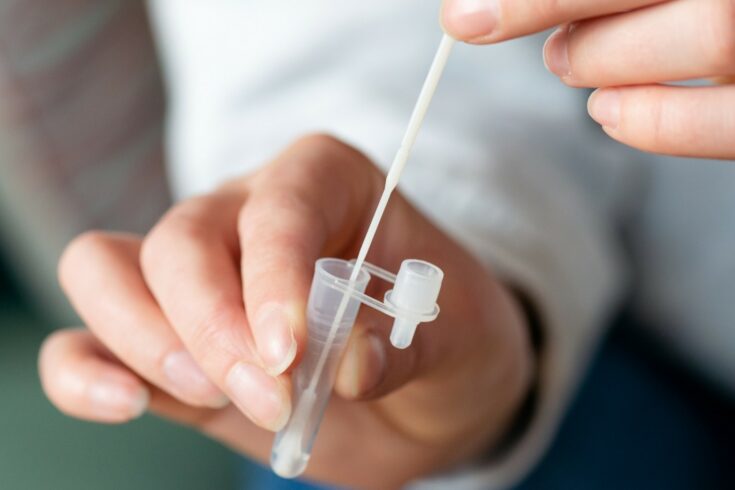 A new point-of-care diagnostics technology spin out based on EPSRC-funded research will transform lateral flow testing for COVID-19 and other illnesses and conditions.

The pioneering technology is developed through the spin out Highfield Diagnostics Ltd (HDx) via the University of Southampton’s Zepler Institute for Photonics and Nanoelectronics (ZIPN). It has enabled a highly sensitive test for COVID-19 that could make diagnosis far simpler and more effective than before.

The disruptive technology is the result of academic research conducted mainly via funding from the Engineering and Physical Sciences Research Council (EPSRC).

The HDx founding team at the University of Southampton includes:

HDx laser techniques will transform lateral flow testing. In current lateral flow tests, the sample to be tested flows along the test strip with a speed that is determined by the properties of the materials used.

We realised early on that if we can modify this speed, then we can increase the interaction that occurs between the analyte complex to be detected, and the capture antibodies that recognise the analyte (an analyte is a substance whose chemical constituents are being identified and measured).

A stronger interaction means a deeper colour on the test line, which allows detection of the COVID virus in lower concentrations in the sample, hence earlier in the infection cycle.

This new COVID-19 lateral flow testing is possible due to the exploration in wider, paper-based diagnostics which Highfield Diagnostics Ltd (HDx) has been working on for several years.

Through the research, HDx developed techniques which have the ability to transform lateral flow testing, providing multiplexed and semi-quantitative measurement of disease-related biomarkers. The new techniques provide higher sensitivity and a lower limit of detection, using multiple isolated flow paths within a single lateral flow device.

In one instance, HDx was able to achieve a signal enhancement of up to 240% and an 800% improvement in the lower limit-of-detection for their high-sensitivity, constricted flow tests. This is compared to normal test strips.

Creating such testing was driven by a need to improve global point-of-care diagnostics for billions across the world for whom routine diagnostics are beyond reach.

So, initially, we asked ourselves what if there was a cost-effective, rapid, sensitive, user-friendly solution? One that allowed the global population to access point-of-care diagnostic tests for a range of diseases and conditions such as sepsis, TB, allergies, cancer, UTIs, tuberculosis and asthma, and of course, more recently, COVID-19?

The multiplexed version of our test has more than one channel inside the flow strip, in effect a miniature four-lane highway where fluids can flow independently to perform different tests, rather than a single track road, where only one test result is possible. Detection of more than one disease or condition at a time from a single sample is a very effective diagnostic solution.

We do this by writing very thin, but very precise polymer walls between each track, which are impermeable to liquids, so there’s no cross-talk between the samples in each track. It’s very simple and easy, and we can write these walls at high speeds using a laser polymerisation process, and it costs a fraction of a penny to do this per device.

Multiplexed testing is very high on the list of needs for next generation accessible global point-of-care diagnostics.

This year, HDx were finalists in the coveted XPRIZE – a Rapid Covid Testing award. It is part of a six month competition to develop faster, cheaper and easier-to-use COVID-19 testing methods at scale.

Now, with HDx as a spin out company from the University of Southampton, the next steps are to swiftly transition from research proof-of-principle to full commercial readiness. It will be supported by the Ambershore Group and initial funding by Verge HealthTech Fund.

The initial pre-seed investment by Verge HealthTech Fund will support the transition from research to commercial readiness. It will also support finalisation of the go-to-market plan in advance of a seed-stage funding round later this year.

We wouldn’t be where we are without the grant funding from EPSRC. And now, at this next stage, we want to unlock a wave of point-of-care diagnostic innovation, open new markets and remove the barriers which have often limited traditional lateral flow devices.

As HDx looks ahead, we plan to partner with global diagnostics companies to explore and innovate new applications of its core technology and continue our collaboration with the University of Southampton’s Faculty of Medicine to develop novel and proprietary, point-of-care diagnostic solutions.