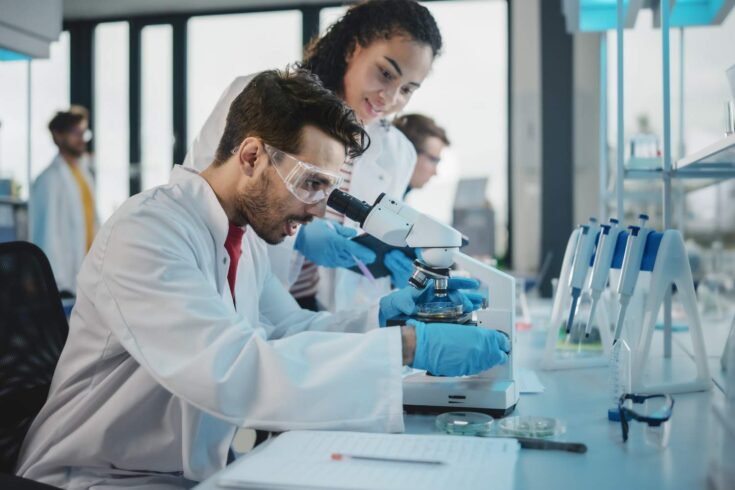 Five world-class teams are set to receive over £19 million from BBSRC to support adventurous research aimed at tackling fundamental questions in bioscience.

Each of these teams, involving 39 investigators from 16 research organisations, will look to advance the frontiers of bioscience knowledge by exploring bold and exciting questions at the forefront of contemporary bioscience.

By pursuing world-class ideas and multidisciplinary research, these projects will convene the people, places, and transformative technologies necessary to tackle complex biological problems from a multitude of perspectives.

The funding through BBSRC’s strategic Longer and Larger (sLoLa) grants programme aims to catalyse ground-breaking collaborations that advance our understanding of fundamental rules of life, with potentially far reaching implications for:

Aims of the projects

The five projects aim to:

Long-term support for discovery science is key to delivering the fundamental breakthroughs that keep the UK at the leading edge of bioscience research.

These five very different projects will each pursue adventurous avenues of investigation at the frontiers of biology by convening the multidisciplinary teams of people, skills and national facilities over the longer timeframes necessary to realise transformational change.

The projects have huge potential to make underpinning discoveries in the life sciences, which could produce future advances to address global challenges, from tackling plastic pollution to treating cancer, and discoveries with commercialisation potential for biopharma, biotechnology and other industries.

Ribosomes are machines within cells that ‘read’ the instructions from genes and use those instructions to construct proteins. The pivotal role of ribosomes in translating our genetic instructions means that a better understanding of how ribosomes function could be important to understand many diseases, including cancers.

Recently, it has been shown that ribosomes, once considered to be identical and inflexible decoding machines that translate ribonucleic acid (RNA) into proteins, can in fact be structurally and functionally specialised.

However, there are only a handful of examples of ribosome specialisation known to science. This means we lack an in-depth understanding of how widespread this mode of gene regulation is, how it functions mechanistically, and what kind of ‘ribosome code’ might exist.

Using a synthesis of evolutionary, functional genomic, and biophysical approaches, this project aims to tackle these big questions in four different groups of organisms (fungi, insects, plants and humans).

The team will use machine learning approaches to integrate data generated by a series of cutting-edge technologies in four major eukaryotic models (fungi, insects, plants and humans):

This will allow them to decipher the ‘ribosome code’, which has the potential to re-write our understanding of the fundamental principles of translation regulation.

Cracking the ‘ribosome code’ could provide insight into how translation goes wrong in ‘ribosomopathies’ and certain cancers. It could also reveal promising new avenues for manipulating the proteome, thus expanding the toolkit for future engineering biology approaches.

This project is a collaboration between eight investigators based at:

Led by Professor Nigel Scrutton, The University of Manchester

Enzymes are proteins that catalyse biochemical reactions in all living organisms.

Most of the enzymes found in nature are heat-activated. However, there exists a few rare examples of natural light-activated enzymes or ‘photocatalysts’ that use a photo-sensitive cofactor called flavin.

As their name suggests, heat-activated enzymes require heat to function. They also work with highly specific and often expensive coenzymes and catalyse reaction types limited to those found in the living cell.

In contrast, photocatalysts require light to function and have fewer chemical restraints. This enables photocatalysts to catalyse reactions that are unavailable to heat-activated enzymes, harnessing a process known as photo-biocatalysis.

There is a pressing need to better understand how photo-biocatalysis works. This would not only provide insight into how biology works with light but could also facilitate the exploitation of this process in industrial biocatalysis.

Combining state-of-the-art biophysical, computational and protein engineering methodologies, this project will apply a cyclical design-build-evaluate-learn approach to discovering the generalisable principles of photo-biocatalysis.

The team will use cutting-edge biophysical techniques to study photocatalyst functionality:

This will allow them to simultaneously contribute new fundamental knowledge on the function of existing photo-enzymes whilst illuminating a path towards the engineering of entirely new-to-nature flavin-containing photocatalysts.

In the longer term, these engineered photocatalysts could be used to synthesise novel products that heat-activated enzymes are unable to synthesise, such as fuels and other high-value chemicals.

This project is a collaboration between six investigators based at:

Bacteria are able to protect themselves from infection by viruses and other mobile genetic elements (MGEs) using highly sophisticated genome defence systems.

Aside from protecting bacterial populations against infection, these systems also influence the spread of antimicrobial resistance (AMR), which relies on the transfer of mobile antibiotic resistance genes between bacteria.

In addition to the CRISPR-Cas system, which has already been co-opted by scientists to revolutionise the field of DNA editing, new bacterial defence systems continue to be discovered.

In nature, these systems do not work in isolation. However, very little is known about how they integrate and what the consequences of this integration are on bacteria-MGE interactions.

This project aims to develop a broader understanding of multi-layered bacterial genome defence systems, at scales ranging from molecules to populations.

The team will use bioinformatic, biophysical and molecular biology approaches to understand how the interactions between genome defence systems protect bacteria against infection.

They will then combine experimental evolution and mathematical modelling to determine how multi-layered defence systems shape bacterial genome and MGE evolution.

Knowledge generated through this project has the potential to uncover how combinations of natural genome defence systems could be exploited in the fight against AMR. In addition, these combinations could be further refined in the laboratory to produce a new generation of genome editing tools for a wide range of engineering biology applications.

This project is a collaboration between 12 investigators based at:

The number of new and untested proteins available in metagenomic databases is in the billions and is currently doubling each year.

This represents a treasure trove for the discovery of novel enzymes with exciting properties. However, there is a need for better tools to be able to effectively mine these databases and find enzymes of interest.

One group of enzymes that are drawing attention are plastic-degrading enzymes or ‘plastizymes’.

Plastizymes could be used to remove the pollution caused by plastic products. This pollution is a fundamental environmental challenge, an enormous waste of resources, and has the potential to become a major world health issue through the ingestion of micro-plastics.

However, there are currently very few known natural plastizymes and these are relatively inefficient and do not degrade all types of plastic pollutants.

This project aims to address these limitations by employing a combination of computational and protein engineering approaches to discovering new plastizymes and improving their catalytic ability.

The team will employ a number of cutting-edge technologies:

This will allow them to simultaneously derive generic pipelines for the discovery and directed evolution of novel enzymes, whilst exploiting these pipelines to produce improved plastizymes.

Longer term, these novel plastizymes could contribute towards the UK’s net zero ambition by increasing our capacity to recycle plastic waste.

This project is a collaboration between four investigators based at:

Cell membranes are generally impermeable to most chemicals, which enables proteins within the membrane to establish chemical gradients between the inside and the outside of cells.

These gradients are used as the driving forces behind some of life’s most essential chemical reactions, including photosynthesis, respiration, and active transport. Therefore, it is vital that any damage to the membrane is rapidly repaired to ensure the continuation of these crucial processes.

In recent studies, a protein belonging to the IM30 protein family has been shown to repair membrane damage in a number of bacterial pathogens and bacteria used in biotechnology to produce toxin chemicals.

Interestingly, IM30 proteins are present in a range of diverse bacteria and even in bacterially-derived chloroplasts, demonstrating their ancientness and suggesting that they provided an ancestral mechanism of membrane repair.

However, while some information is known about their structure and localisation in cells, the mechanisms by which they work are still a mystery.

This project aims to functionally characterise the IM30 system in a number of clinically and industrially-relevant microbes, using bioinformatics, microbial genetics, and advanced biophysical approaches.

These will be used to help determine how IM30 proteins protect against membrane damage in evolutionarily-divergent organisms. This will uncover new fundamental knowledge about an early step in the evolution of robust cellular life.

Mechanistic understanding of this cellular process could also reveal new pathways to target in the fight against AMR, since some bacteria use IM30 proteins to resist membrane-targeting antibiotics.

This project is a collaboration between nine investigators based at:

Advancing our understanding of the rules of life is a key part of BBSRC’s delivery plan.

By encouraging researchers to pursue bold and creative questions, BBSRC aims to catalyse exciting fundamental bioscience discoveries that may have far reaching implications for agriculture, health, biotechnology, and the green economy.

This is the fourth round of sLoLa funding since the scheme relaunched in 2018 and brings its total investment to £64 million. BBSRC plans to invest up to a further £16 million in a fifth round which is ongoing.