230 megaelectron volt milestone will target tumours at any depth 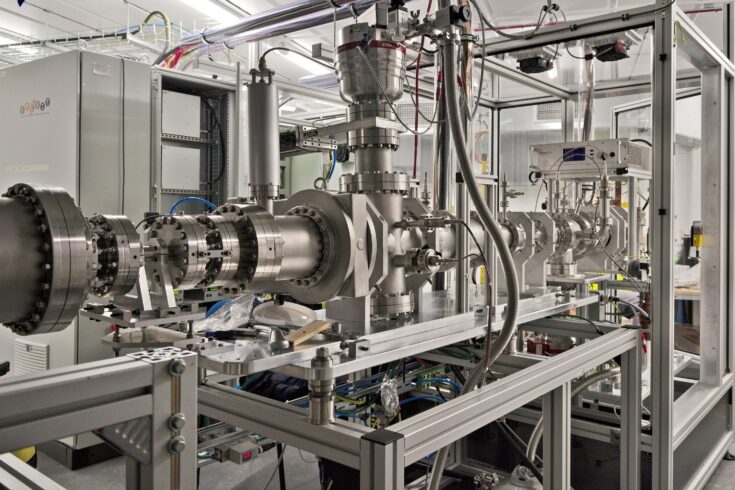 230 million electron volt success marks the start of a new era for the proton therapy.

A UK start-up located at the Science and Technology Facilities Council’s (STFC) Daresbury Laboratory, has reached its most critical milestone yet, in the development of pioneering next-generation technology to treat cancer.

Advanced Oncotherapy plc confirms that its linear proton radiotherapy LIGHT accelerator has fired a 230 megaelectron volt (MeV) proton beam, meaning that it can treat tumours at a depth of 32cm.

This is the company’s most significant breakthrough yet, and takes it a huge step closer to bringing this technology to market.

What is proton therapy?

Proton therapy is a form of radiation therapy that produces fewer side effects than conventional radiotherapy, thanks to the unique properties of protons.

Protons are large particles with a positive charge. They deposit most of their energy when they stop at the end point to the beam, resulting in almost no radiation to surrounding organs or tissue.

LIGHT is the first proton therapy medical system in the world that uses a linear accelerator, based on technology originally developed at CERN, home to the Large Hadron Collider.

This means it accelerates protons sequentially in a straight line, as opposed to the spiral of traditional proton therapy systems.

This is supported by the modelling study led by the company’s research partner, The Cleveland Clinic, presented at the American Society for Radiation Oncology 2022 Annual Meeting held in Texas. It quantitatively compared treatment quality from different proton systems, including LIGHT, and other photon systems for the irradiation of brain metastases.

A new era for proton therapy

230MeV is the maximum energy of the LIGHT system.

This achievement means we can proceed with our clinical investigation plan, we can move forward with our regulatory plan, and with each step we get closer to introducing this breakthrough technology to the market and democratizing access to proton therapy.

230MeV is the start of a new era for the proton therapy market and for Advanced Oncotherapy.

Advanced Oncotherapy established its testing and assembly site at Daresbury Laboratory, at Sci-Tech Daresbury in the Liverpool City Region, in 2018.

Daresbury Laboratory was selected for its established infrastructure and wealth of skills and knowledge in the development of new particle accelerator technologies, particularly for new medical applications.

Since then, the company has successfully achieved all the necessary milestones needed to prove that it can treat tumours at any depth, bringing it one step closer to commercialisation.

Accelerating protons at an energy sufficient to treat tumours that are hard to reach is a major achievement for this project.

At STFC’s Daresbury Laboratory, home to the North West HealthTec Cluster, we have a strong track record in developing world class test facilities to support the development of new cancer therapies.

It’s fantastic to know that the expertise in particle accelerators and facility construction here is contributing towards the success of Advanced Oncotherapy’s ground breaking technology.

I look forward to continuing to support the business in the next stages in its development of this project, which will bring significant benefits to our society’s wellbeing and economy in the future.

In collaboration with University Hospitals Birmingham, Advanced Oncotherapy will now finalise the required regulatory processes to achieve certification for LIGHT, aiming to treat first patients towards the end of 2023.