Clues to the Moon’s origins provided by UK supercomputer simulation 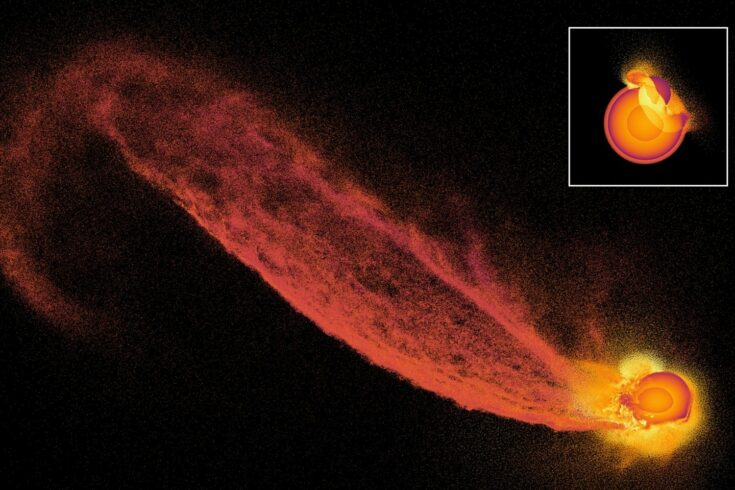 One of the most powerful supercomputers in the UK has helped scientists simulate collisions like the one thought to have formed the Moon and cause the Earth to lose between 10-60% of its atmosphere.

These findings have helped develop a new way to predict atmospheric loss from any collision across a wide range of rocky planet impacts that could be used by scientists investigating the Moon’s origins.

The high-resolution simulations were run using the SWIFT open-source simulation code, carried out on the COSMA supercomputer.

The puzzle about how the Moon formed and the other consequences of a giant collision with the early Earth is something that scientists are working hard to unravel.

Modelling these violent collisions is already a numerical challenge, but the low density of an atmosphere compared with the rest of the planet requires orders of magnitude higher resolution than typical simulations.

The DiRAC facility’s large memory intensive system, combined with the game-changing SWIFT hydrodynamics and gravity code, allowed us to run high-resolution simulations of hundreds of different scenarios for many different colliding planets.

This showed the varying effects on a planet’s atmosphere depending upon a number of factors such as the angle, speed of impact or the sizes of the planets.

While these computer simulations don’t directly tell us how the Moon came to be, the effects on the Earth’s atmosphere could be used to narrow down the different ways it might have been formed and lead us closer to understanding the origin of our nearest celestial neighbour.

Earlier this year, an initial study reported that giant impacts that dominate the late stages of planet formation can have a wide range of consequences for young planets and their atmospheres.

The latest paper looks at the effects across a much wider variety of impacts adjusting for size, mass, speed and angle of the impacting object. They also changed the density of the impactor and if it was made of iron, rock or both.

The simulations from DiRAC revealed the different outcomes when one or more of these variables are changed, leading to atmospheric loss or gain or sometimes the complete obliteration of the impacted planet.

They also found that slow giant impacts between young planets and massive objects could add significant atmosphere to a planet if the impactor also has a lot of atmosphere.