Construction begins on the ‘ear’ that will listen to the Universe 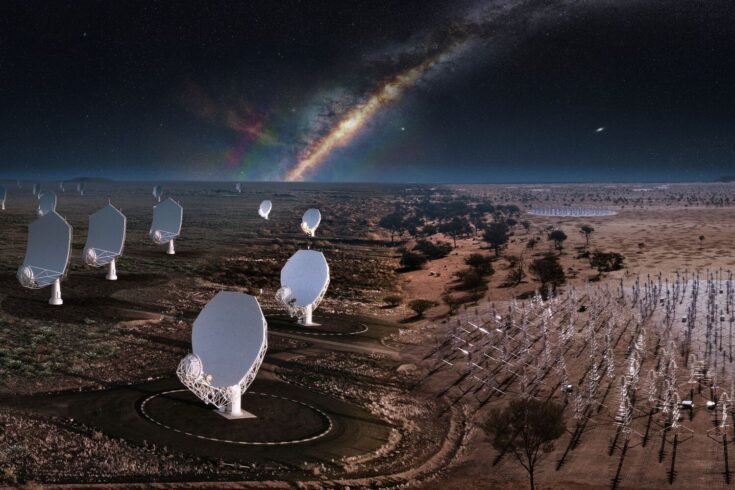 The construction of 2 next-generation radio astronomy telescopes from the Square Kilometre Array Observatory (SKAO) has begun on-site in Australia and South Africa.

Co-funded by the UK, the SKA telescopes will tackle some of the most fundamental scientific questions of our time.

From the exploration of the early Universe when the very first stars and galaxies formed to the existence of extra-terrestrial life.

The 2 complementary telescopes will be brought to life over the coming decade:

The SKAO will combine the signals received from thousands of small antennas and hundreds of dishes spread over several thousand kilometres and different continents, to simulate a single giant radio telescope.

In addition to co-funding the project, the UK is also leading the development of the massive software infrastructure that will be used to analyse the data coming to Earth from the stars.

Scientists will use the SKA telescopes over the course of their expected 50-year lifespans to unravel some of the most pressing questions in astrophysics:

This funding will build the ‘brain’ of the SKA telescopes, the software system making observations possible.

Once constructed, the Square Kilometre Array Observatory is going to be one of the world’s key large-scale scientific instruments, delivering a massive step change in radio astronomy.

The UK has a crucial role for the future operation of the observatory, both by hosting the SKA headquarters in Jodrell Bank in Cheshire and by leading the complex software tools for the telescopes in Australia and South Africa.

This construction commencement marks the start of the global efforts to explore the evolution of the early Universe with unprecedented precision, with the UK astronomy community benefitting from SKAO’s science capabilities for decades to come.

Together, the SKA telescopes will form the world’s largest and most capable radio astronomy instrument.

It will be managed by the UK-hosted SKAO global headquarters at Jodrell Bank near Manchester.

The UK is 1 of the 7 founding countries involved in creating the SKAO, the intergovernmental organisation that will oversee the delivery of the telescopes.

It is also 1 of the 3 host countries, with the headquarters based at Jodrell Bank in Manchester, co-funded by the UK government through STFC.

Home to more than 150 experts

The SKAO global headquarters is home to more than 150 experts in:

The UK government, through STFC, is the largest contributor to SKAO, committing to 15% of the cost of constructing the SKAO from 2021 to 2030.

Several UK universities and institutions are involved with the design of the SKAO, and include:

One step closer to operation

As the UK we are very proud to be one of the 3 core host partners of the Square Kilometre Array Observatory.

I would like to congratulate colleagues in South Africa and Australia on achieving this latest milestone and helping to bring us one step closer to the operation of this exciting observatory.

After construction completion, the 2 complementary telescopes will be the ‘ears’ on either side of the planet allowing us to listen to those murmurings from the deep Universe.

As the home of the control centre for the observatory, the UK is helping lay the foundation for new galaxy-level discoveries through radio astronomy.

Scientists, engineers and researchers across UK industry and academia are working to deliver the working ‘brain’ behind the SKA telescopes, the software systems which make space observations possible and allow us to make sense of what we see and hear.

All of these efforts help to channel more funds, jobs, careers, opportunities and innovation both into the UK economy, but just as importantly into the global commercial space science economy.

With its extremely high resolution and sensitivity, the SKA radio telescope will allow scientists to study the Universe in more detail than ever before.

Scientists and engineers at UK universities and institutions are heavily involved in the design of the SKAO.

Software developers and astronomers at University of Cambridge, STFC RAL Space and University of Oxford are leading the development of the science data processor and analysis software.

These are required to process the extreme rates of raw data from the SKA telescopes into science outputs.

The teams ensure the processor is robust, resilient, easy-to-use and interfaces seamlessly with the other software and hardware components of the SKA.

The UK ATC is leading the development of the observatory science operations systems as part of the Indian-led observatory monitoring and control software package.

The team is building the observation preparation, design, and execution systems following the entire workflow from an observer proposing observations through to an operator scheduling and executing them on the telescope.

The UK is also leading on the design of a key component of the low-frequency telescope, known as the Monitor, Control, and Calibration Subsystem (MCCS).

MCCS performs control and monitoring of both the hardware and software components of the individual elements of the low-frequency telescope along with management and calibration of the observations.

The universities of Manchester and Oxford, alongside STFC’s Technology Department and Daresbury Laboratory, are part of the team.

The team is creating a fully tested system ready to go live as soon as the antennas come online.

Astronomers and software engineers at the universities of Manchester and Oxford are leading the teams which are developing the powerful and precise pulsar search subsystem.

This is for both the low and mid-frequency telescopes.

This software will enable the telescopes to be used to search thousands of positions on the sky at once to identify large numbers of new pulsars.

It will effectively create a galaxy-scale gravitational wave detector.