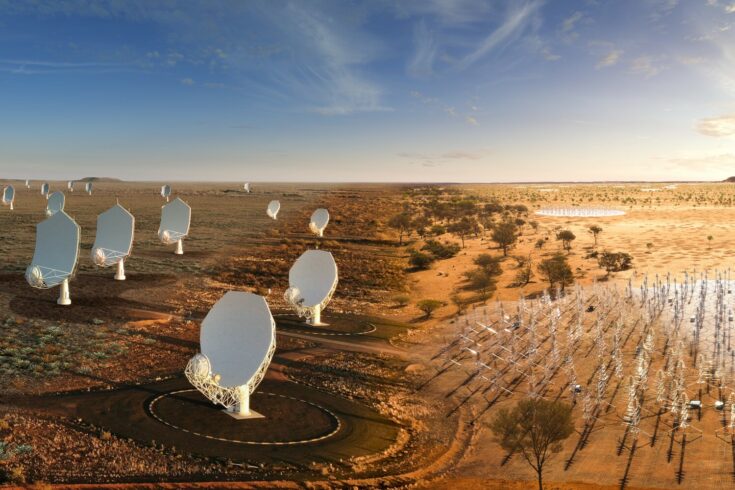 In a historic milestone for the global astronomy community, scientists and engineers have the go-ahead to build the world’s largest radio telescope network.

At the meeting of the Square Kilometre Array Observatory’s (SKAO) council last week, members approved the start of construction, giving the green light for the construction of the telescopes in Australia and South Africa to begin.

The cost of constructing the two telescopes and the associated operations and business-enabling functions will be slightly under €2 billion over the period 2021 to 2030. The UK’s contribution over this period will be over £270 million.

The UK is one of the seven founding countries involved in creating the SKAO, the intergovernmental organisation that will oversee the delivery of the telescopes.

It is also one of the three host countries, with the headquarters based at Jodrell Bank in Manchester, co-funded by the UK government through the Science and Technology Facilities Council (STFC).

The approval comes after seven years of design and engineering work by more than 500 experts from 20 countries to develop and test the technologies needed to build and operate the state-of-the-art telescopes.

The SKAO will combine the signals received from thousands of small antennas and hundreds of dishes spread over several thousand kilometres and different continents, to simulate a single giant radio telescope.

With its extremely high resolution and sensitivity, it will allow scientists to study the universe in more detail than ever before.

Eleven international consortia representing more than 100 institutions including research labs, universities and companies from around the world worked together to design the components that allow the telescopes to function.

Scientists and engineers in the UK, supported by STFC, have led the design of key elements of the SKAO’s telescopes. This includes the Science Data Processor consortia and Signal and Data Transport engineering design consortia, which is vital for carrying the information received by the telescopes and processing it ready for scientists to study.

The UK’s leadership will continue into and throughout construction. The UK will lead several areas, such as Synchronisation and Timing (SAT), which is a critical and complex element which affects the ultimate performance and functionality of the telescopes.

The SAT element is critical to providing the capability needed for some of the key science goals, such as testing General Relativity and the detection of gravitational waves.

As well as delivering revolutionary science, the construction of the telescopes will produce tangible societal and economic benefits for the countries involved.

The hugely challenging data requirements of the project will drive next generation data-intensive supercomputing developments, and the resulting construction work will complement other government investments.

The investment enables economic and societal benefits, with the UK expected to receive a significant return through construction contracts.

UK industry, universities and STFC labs are set to benefit from work in areas such as receiver and cryogenic manufacture and big data.

Hosting the headquarters is aiding in developing local businesses in and around the Greater Manchester area. This will employ highly-skilled personnel in areas such as software development, telescope operations and project management. This will help to retain highly skilled personnel within the UK and will enable knowledge exchange and create a skilled workforce in critical areas.

Construction of the telescopes is expected to begin this year and end in 2028, with operations beginning soon after. It is anticipated that the telescopes will be in operation for approximately 50 years.

I am ecstatic. This moment has been 30 years in the making. Today, humankind is taking another giant leap by committing to build what will be the largest science facility of its kind on the planet. Not just one, but the two largest and most complex radio telescope networks, designed to unlock some of the most fascinating secrets of our universe.

In line with our ambition to unleash innovation across the UK, we are proud to be funding the world’s largest radio telescope network, the Square Kilometre Array, the biggest astronomy project of this generation.

Our position at the heart of this record-breaking project reinforces the UK’s status as a science superpower, as well as cementing Manchester’s reputation as a global hub for innovation.

This significant milestone will be celebrated by the astronomy community across the world. It signifies that governments around the globe recognise the importance of supporting these frontier scientific endeavours.

The benefits to UK from this next phase will be almost immeasurable. We will reap the economic rewards from industry contracts for the construction. Our scientists and engineers will lead the way in vital components of the build, as they did during the design stage.

One of the greatest qualities of human nature is our thirst for knowledge and understanding, and we are now one step closer to knowing more about the universe than we have ever known before.