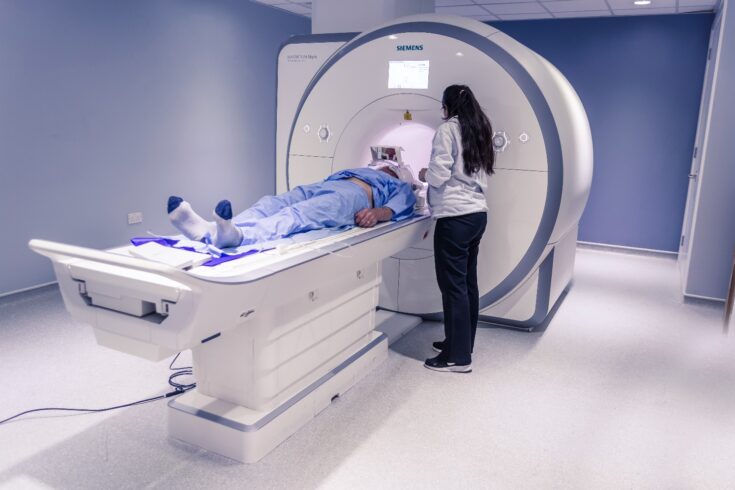 The collection of whole-body repeat imaging scans of 60,000 UK Biobank participants will provide researchers with a unique set of longitudinal measures to understand the determinants and progression of disease in mid-to-later life.

This project is in partnership with:

This £30 million project will capture a repeated set of highly detailed, multi-organ images from a large cohort of participants, allowing researchers to assess changes in physiology over time.

This effort will enable a better understanding of the trajectory of major chronic diseases of mid-to-later life and enable researchers to explore the mechanisms through which diseases occur in individuals.

The first phase of the UK Biobank imaging study began in 2014 and has already captured magnetic resonance imaging (MRI) data from over 50,000 participants.

This includes MRI images of the brain, heart and abdomen, together with bone density and ultrasound scans of the carotid arteries.

The aim is to expand the study over the next two years, with a view to collecting these data on up to 100,000 participants.

The second phase of the project will involve performing repeat imaging on 60,000 of these participants, two to seven years after their initial scan.

The baseline imaging project is already the largest dataset of its kind in the world. The addition of the repeat imaging data will provide a unique set of longitudinal measures for the scientific community to assess changes in participants’ health as they age.

The imaging data can be combined with extensive phenotypic and genetic data already available to researchers in UK Biobank’s database. This will advance understanding of the progression of a wide range of chronic diseases of mid-to-later life, including cardiovascular and neurodegenerative diseases.

Repeat imaging will be particularly valuable for studying diseases such as dementia. This approach will enable research into how early (including, pre-symptomatic) changes in the structure and function of the brain over time are related to dementia risk.

Such insights from repeated scans could lead to improvements in diagnosis before symptoms even occur and enable the early interventions of potential therapies.

Longitudinal imaging has already produced novel research findings within UK Biobank. For example, a group of researchers at the University of Oxford recently conducted a study that used repeat imaging data from about 2,000 UK Biobank participants during the COVID-19 pandemic.

The availability of imaging data from participants both before and after SARS-CoV-2 infection made it possible to identify short-term changes associated with mild infection in specific parts of the brain, especially those related to smell and taste.

UK Biobank’s biomedical database is already the most comprehensive database in the world for scientific and health related research.

The collection of a repeat set of whole-body scans on such a large scale will enable many more fundamental discoveries, better understanding of early disease stages and their diagnosis. It will also support the development of new treatments for diseases of mid-to-later life.

We are grateful to the MRC, Calico and CZI for their generous funding of this project and to the incredible UK Biobank participants without whose dedication and altruism we would not be able to conduct this ambitious study.

The UK Biobank imaging study has created a world leading biomedical database which has changed our understanding of a wide range of diseases.

The expansion of the repeat imaging through this significant partnership of MRC with Calico and CZI will greatly enhance UK Biobank’s position as a pioneer of health-related research. It will accelerate this revolution in our understanding of the genesis and development of diseases.

We are proud to be a funder of such an ambitious project, one that advances our scientific knowledge of human disease and will ultimately save lives.

Unmatched by other approaches

We are excited to partner with the MRC and CZI on the UK Biobank Repeat Imaging Project, which highlights Calico’s long-standing interest in understanding the key drivers of age-related disease outcomes.

Repeat imaging in large human cohorts like the UK Biobank will provide a dynamic view of individual aging trajectories in ways unmatched by other approaches.

The UK Biobank Repeat Imaging Project is a unique opportunity to measure human biology in action and to advance our understanding of the human body in health and disease.

The Chan Zuckerberg Initiative is proud to support the creation of this large-scale scientific reference, which combines medical imaging with genetic data so that basic scientists and clinical and translational researchers can better address the causes and trajectories of a wide range of diseases.

The MRC, CZI and Calico have each committed £10 million of funding for this project.