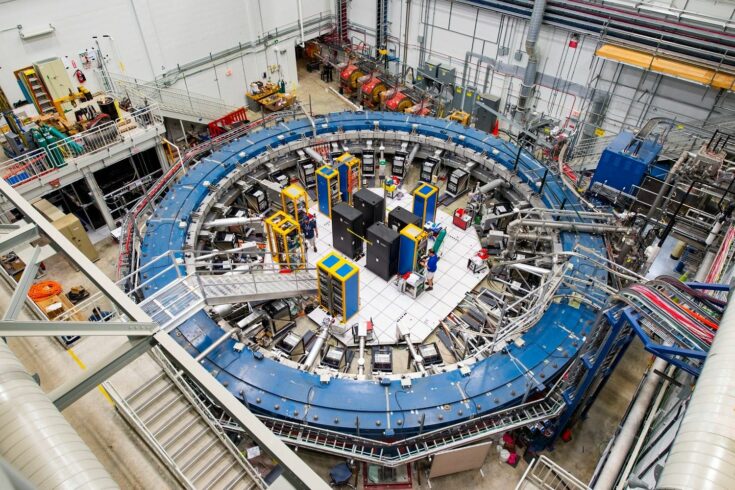 A much-anticipated result from an international science experiment provides strong evidence for the existence of an undiscovered subatomic particle or new force.

The result was announced today, from the Muon g-2 experiment at the Fermi National Accelerator Laboratory. It provides tantalising evidence that the elementary particles called muons are not behaving in the way they are supposed to according to the leading theory of physics – the Standard Model.

Scientists from the UK, funded by the Science and Technology Facilities Council, have played a vital role in the g-2 experiment.

The Muon g-2 experiment searches for signs of new particles and forces by precisely examining the muon’s interaction with a surrounding magnetic field.

The muon, when placed in the magnetic field, itself acts like a tiny magnetic compass and like a gyroscope, this compass rotates at a certain precise frequency, predicted by the Standard Model.

However, the g-2 collaboration has measured this rotation to be faster than predicted – suggesting that our current understanding of physics is incomplete. This hints at the presence of additional particles or hidden subatomic forces that are manifest in the subatomic quantum fluctuations surrounding the muon.

It is an exciting time to be a particle physicist. We know that our current understanding of the universe is incomplete. What we are now seeing from leading experiments, such as g-2, could be the first glimpses behind the curtain into a new world of physics.

The UK, through STFC support, continues to play leading roles in global experiments at the forefront of science. I look forward to the coming years and seeing the next piece of the puzzle fall in place.

A decade of waiting

This result has been anticipated for over a decade, since a measurement published in 2006 from an experiment at Brookhaven National Lab stood at odds with the Standard Model.

The highly anticipated result from Fermilab pushes the precision of the experiment into uncharted territory in the quest to confirm or refute that finding.

Professor Mark Lancaster of the University of Manchester is the UK lead for the g-2 experiment and an ex co-spokesperson of the experiment.

This is a long-awaited measurement and provides strong evidence that hints at the existence of new particles and forces.

We know our current list of fundamental particles and forces is incomplete because they are not sufficient to explain the dark-matter content of the universe or that the universe has very little anti-matter.

This measurement alone has a one in a thousand chance of being a statistical fluke and one in 40 thousand when combined with the previous measurement from Brookhaven.

It falls short of the one in a million gold standard used in particle physics to claim a discovery, but we are already analysing much more data that will significantly improve the precision of the measurement by more than a factor of two.

This result, along with other recent developments including the LHCb result last week, could suggest that scientists are on the precipice of a new era of physics.
Professor Lancaster added:

When viewed together with the recent measurements from CERN’s LHCb experiment, there seems to be a pattern emerging of muons behaving differently than our theory predicts.

This measurement is the most precise measurement ever to be made at a particle accelerator: it has an uncertainty of better than 0.5 parts per million.

Graziano Venanzoni, co-spokesperson of the Muon g-2 experiment and physicist at the Italian National Institute for Nuclear Physics, said:

Today is an extraordinary day, long awaited not only by us but by the whole international physics community. A large amount of credit goes to our young researchers who, with their talent, ideas and enthusiasm, have allowed us to achieve this incredible result.

Muon g-2 is an international collaboration between Fermilab and dozens of labs and universities in seven countries, including the UK.

The UK collaboration comprises the universities of Lancaster, Liverpool, Manchester, and UCL and the Cockcroft Accelerator Institute.

The build of the straw tracking detectors at Liverpool was led by Professor Themis Bowcock and Dr Joe Price with data acquisition provided by UCL led by Dr Becky Chislett.

Two former PhD STFC-supported students from the UK now have two of the three largest analysis roles in the experiment.

Liverpool University and UCL provided one of the key detector systems for the experiment and this along with the talent and ingenuity of many young researchers has made this measurement possible.

Top image:  The Muon g-2 ring sits in its detector hall amidst electronics racks, the muon beamline, and other equipment. This impressive experiment operates at negative 450 degrees Fahrenheit and studies the precession (or wobble) of muons as they travel through the magnetic field. Credit: Fermilab/Reidar Hahn