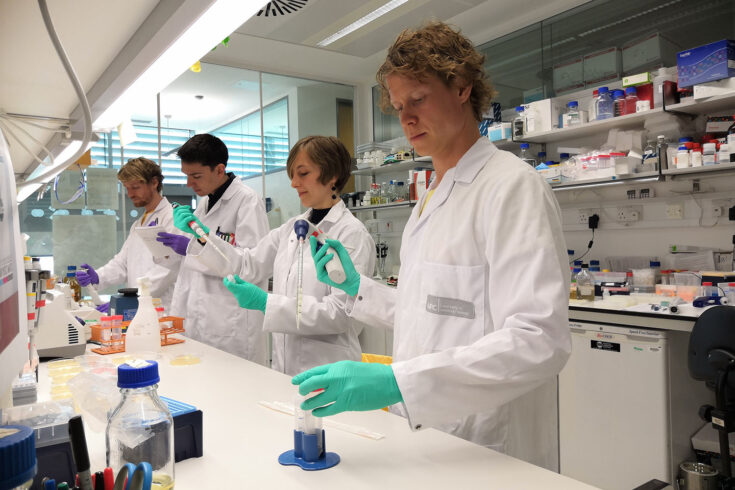 Cells, using a synthetic genome, can make polymers from artificial building blocks for the first time, and the bacteria are also resistant to viral infections.

Scientists have developed the first cells that can construct artificial polymers from building blocks that are not found in nature, by following instructions the researchers encoded in their genes.

The study, led by scientists from the Medical Research Council (MRC) Laboratory of Molecular Biology, in Cambridge, UK, also found the synthetic genome made the bacteria resistant to infection by viruses.

The scientists say their research could lead to the development of new polymers – large molecules made of many repeating units, such as proteins, plastics, and many drugs including antibiotics. It can also make it easier to manufacture drugs reliably using bacteria.

The research, published today in the journal Science, builds on previous ground-breaking work by the team (Nature). In 2019 they developed new techniques to create the biggest ever synthetic genome – constructing the entire genome of the bacterium Escherichia coli (E. coli) from scratch.

The scientists’ goal was to utilise their new technology to create the first cell that can assemble polymers entirely from building blocks that are not found in nature.

Proteins are a type of polymer, so the scientists aimed to make artificial polymers by exploiting cells’ natural protein-making processes.

The genetic code instructs a cell how to make proteins, which are constructed by joining together strings of natural building blocks, called amino acids.

The genetic code in DNA is made up of four bases, represented by the letters: A, T, C and G. The four letters in DNA are ‘read’ in groups of three letters – for example ‘TCG’ – which are called a ‘codon’.

With four letters in groups of three, there are 64 possible combinations of letters. However, there are only 20 different natural amino acids that cells commonly use. So, several different codons can be synonymous – they all code for the same amino acid – for example: TCG, TCA, AGC and AGT all code for serine.

There are also codons that tell a cell when to stop making a protein, such as TAG and TAA.

When, in 2019, the team created the first entire genome synthesised from scratch for the commonly studied bacteria, E. coli, they also took the opportunity to simplify its genome.

They replaced some of the codons with their synonyms: they removed every instance of TCG and TCA and replaced them with the synonyms AGC and AGT.

They also removed every instance of the ‘stop’ codon TAG and replaced it with its synonym TAA.

The modified bacteria no longer had the codons TCG, TCA and TAG in their genome, but they could still make normal proteins and live and grow.

Now, in their latest research, the scientists have further modified the bacteria to remove the tRNA molecules that recognise the codons TCG and TCA. This means that – even if there are TCG or TCA codons in the genetic code – the cell no longer has the molecule that can read those codons.

This is fatal for any virus that tries to infect the cell, because viruses replicate by injecting their genome into a cell and hijacking the cell’s machinery. Virus genomes still contain lots of the TCG, TCA and TAG codons, but the modified bacteria are missing the tRNAs to read these codons.

When the machinery in the modified bacteria tries to read the virus genome, it fails every time it reaches a TCG, TCA or TAG codon.

In this study, the researchers infected their bacteria with a cocktail of viruses. Unmodified normal bacteria were killed by the viruses, but the modified bacteria were resistant to infection and survived.

Making bacteria resistant to viruses could make manufacturing certain types of drugs more reliable and cheaper. Many drugs – for example, protein drugs, such as insulin, and polysaccharide and protein subunit vaccines – are manufactured by growing bacteria that contain instructions to produce the drug.

Professor Jason Chin, from the MRC Laboratory of Molecular Biology, who led the study, said:

If a virus gets into the vats of bacteria used to manufacture certain drugs then it can destroy the whole batch. Our modified bacterial cells could overcome this problem by being completely resistant to viruses. Because viruses use the full genetic code, the modified bacteria won’t be able to read the viral genes.

By creating bacteria with synthetic genomes that do not use certain codons, the researchers had freed up those codons to be available to be used for other purposes, such as coding for synthetic building blocks, called monomers.

This system allows us to write a gene that encodes the instructions to make polymers out of monomers that don’t occur in nature.

These bacteria may be turned into renewable and programmable factories that produce a wide range of new molecules with novel properties, which could have benefits for biotechnology and medicine, including making new drugs, such as new antibiotics.

We’d like to use these bacteria to discover and build long synthetic polymers that fold up into structures and may form new classes of materials and medicines. We will also investigate applications of this technology to develop novel polymers, such as biodegradable plastics, which could contribute to a circular bioeconomy.

The researchers engineered the bacteria to produce tRNAs coupled with artificial monomers, which recognised the newly available codons (TCG and TAG).

They inserted genetic sequences with strings of TCG and TAG codons into the bacteria’s DNA. These were read by the altered tRNAs, which assembled chains of synthetic monomers in the sequence defined by the sequence of codons in the DNA.

The cells were programmed to string together monomers in different orders by changing the order of TCG and TAG codons in the genetic sequence.

The researchers were able to create polymers made of up to eight monomers strung together. They joined the ends of these polymers together to make macrocycles – a type of molecule that forms the basis of some drugs, such as certain antibiotics and cancer drugs.

In this study, the synthetic monomers were linked together by the same chemical bonds that join together amino acids in proteins. The researchers are investigating how to expand the range of linkages that can be used in the new polymers (MRC Laboratory of Molecular Biology).

Dr Megan Dowie, head of molecular and cellular medicine at the MRC, which funded the study, said:

Dr Chin’s pioneering work into genetic code expansion is a really exciting example of the value of the MRC’s long-term commitment to discovery science. Research like this, in synthetic and engineering biology, has huge potential for major impact in biopharma and other industrial settings.

The study was funded by the MRC and the European Research Council.