Five-year mission to create 3D map of the universe begins 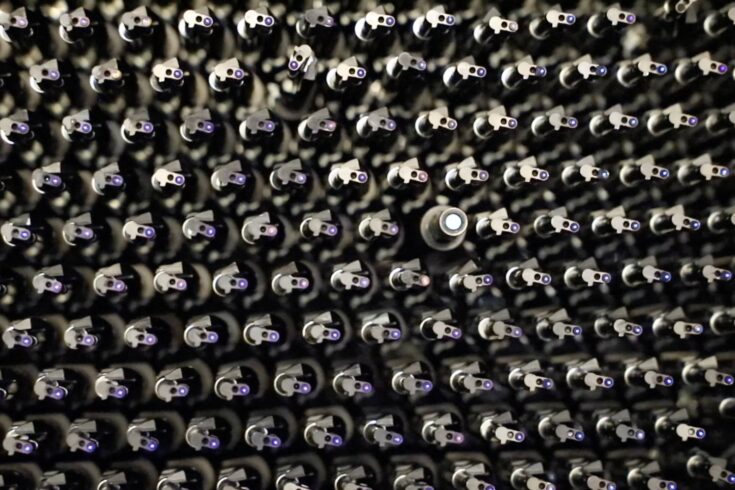 A mission to create a map of the universe in never-before-seen-detail using the Dark Energy Spectroscopic Instrument (DESI) has begun.

DESI is a collaboration involving hundreds of scientists around the world and in the UK it is funded by the Science and Technology Facilities Council (STFC).

Capturing the light from galaxies

DESI will capture and study light from tens of millions of galaxies and other distant objects with the aim of uncovering the mysteries of dark energy.

Dark energy is thought to explain why the universe is expanding at an ever-accelerating rate.

The instrument is based at Kitt Peak National Observatory in the US and it contains 5,000 fibre-optic eyes, each of which can image an entire galaxy in just 20 minutes.

In a four-month trial run, DESI collected four million spectra from galaxies – more than the combined output of all previous spectroscopic surveys.

Once its mission is complete, DESI will have created a 3D map of the universe to a distance of up to 11 billion light-years.

The start of the survey work with DESI marks the start of an exciting journey to answer an enduring mystery about the very fabric of the universe.

DESI gives us the opportunity to explore the nature of dark energy, potentially one of the major forces shaping the universe.

This international collaboration applies the best cutting-edge technology and expertise from across the globe to reveal more about the unknown universe than ever before. It is great that UK scientists are playing such a strong role in this scientific adventure.

DESI in the UK

The UK institutions in the DESI UK collaboration are:

STFC provided £2.4 million funding to facilitate DESI instrumentation development at Durham University and at UCL, and to enable about 30 UK academic staff and students to participate in DESI.

This survey will go deeper into space and the history of the universe than we have ever achieved before, and follows years of efforts of building DESI by the international collaboration, including by UCL’s and Durham’s instrumentation team.

DESI is a revolution in astronomy, collecting spectra from 5,000 galaxies every 20 minutes. It will lead to unprecedented observations that will help us characterise the mysterious nature of dark energy.

What is DESI made of?

DESI is mounted on a four-metre telescope topped with an optical corrector.

The optical corrector is led by UCL. It allows the 5,000 ‘eyes’ of fibre-optic cable to be arranged over eight square degrees in such a way that they can move independently to capture light from individual galaxies.

These cables, working with the six huge lenses, give the telescope a vast viewing window.

The captured light is then split into bands of colour by spectrographs to map the movements of the galaxies relative to Earth, revealing the expansion history of the universe.

Michael Levi, the Director of DESI based at the US Department of Energy’s Lawrence Berkeley National Laboratory (Berkeley Lab), the project’s lead institution, said:

We will measure 10 times more galaxy spectra than ever obtained. These spectra get us a third dimension.

He explained that instead of two-dimensional images of galaxies, quasars, and other distant objects, the instrument collects light, or spectra, from the cosmos.

It becomes a time machine where we place those objects on a timeline that reaches as far back as 11 billion years ago.

Top image:  Photo of a small section of the DESI focal plane, showing the one-of-a-kind robotic positioners. The optical fibres, which are installed in the robotic positioners, are backlit with blue light in this image. (Credit: DESI collaboration)