How our brain uses nutritional state to regulate growth 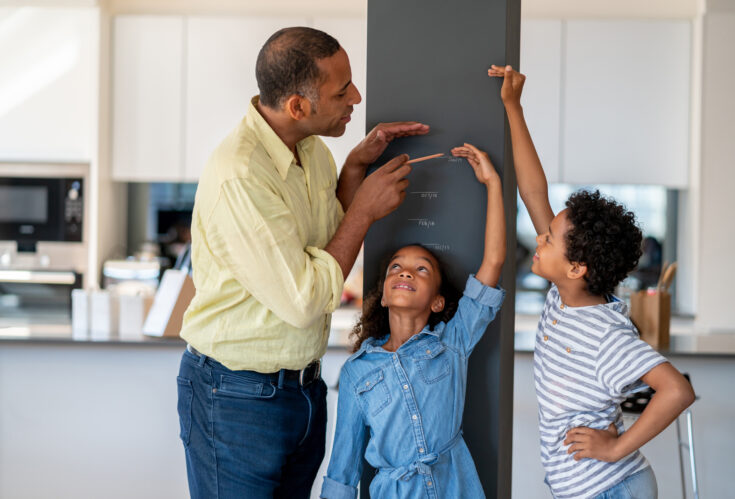 Scientists discovered how a receptor in the brain, MC3R, detects the nutritional state of the body and regulates the timing of puberty and rate of growth in children.

These findings published today in the journal Nature, may explain how humans have been growing taller and reaching sexual maturity earlier over the past century. Over the 20th century, average height increased by about 10cm in the UK, and up to 20cm in other countries.

Scientists have long suggested that this phenomenon could be related to more reliable access to food for pregnant women and children. Until now, precisely how the body senses its state of nutrition and turns that information into growth and sexual maturation had not been understood.

It was already known that signals reach the brain to indicate the body’s nutritional state, such as:

In a part of the brain called the hypothalamus, these hormones act on a small group of neurons that produce signals called melanocortins.

The melanocortins act on a variety of receptors, two of which are present in the brain. One of these, the melanocortin 4 receptor (MC4R) has previously been shown to regulate appetite and lack of MC4R results in obesity. However, the MC4R system does not control the effect of nutrition on growth and timing of puberty.

Now, a study has discovered a role for the brain’s other melanocortin receptor, which is known as the melanocortin 3 receptor (MC3R). It is led by researchers from the Medical Research Council (MRC) Metabolic Diseases Unit and the MRC Epidemiology Unit.

These are both part of the Wellcome-MRC Institute of Metabolic Science at the University of Cambridge. The study has collaborators from:

They found that in response to nutritional signals the MC3R system controls the release of key hormones regulating growth and sexual maturation.

To show the link in humans, the scientists searched amongst the half a million volunteers in UK Biobank for people with naturally occurring genetic mutations that disrupt the function of the MC3R. They identified a few thousand people who carried various mutations in the gene for MC3R and found these people were on average shorter and went into puberty later than those with no mutation.

For example, they identified 812 women who had the same mutation in one of their two copies of the MC3R gene. This mutation only partly reduced the ability of the receptor to work. Despite this subtle effect, women who carried this were on average 4.7 months older at puberty than those without the mutation.

People with mutations that reduced the function of MC3R were also shorter and had lower amounts of lean tissue, such as muscle, but it had no influence on how much fat they carried.

To confirm these findings in children, they studied almost 6,000 participants from the Avon Longitudinal Study of Parents and Children (ALSPAC) and identified six children with mutations in MC3R. The six children were shorter and had lower lean mass and weight throughout childhood, showing that this effect starts very early in life.

This same phenomenon linking adequate nutritional body stores to reproductive maturity is seen right across the animal kingdom, so the researchers conducted studies in mice to confirm that the MC3R pathway operates across species.

Work in the laboratory of Dr Roger Cone at the University of Michigan showed that while normal mice shut off their reproductive cycle when they underwent a period of food deprivation, mice engineered to lack the MC3R did not. This confirmed that MC3R is a necessary part of how the nutritional state controls sex hormone production.

Work by Dr Roger Cone had previously demonstrated a role for the MC3R in the control of growth and lean mass in mice.

Professor Sir Stephen O’Rahilly, a senior author on the study and Director of the MRC Metabolic Diseases Unit at the University of Cambridge, said:

This discovery shows how the brain can sense nutrients and interpret this to make subconscious decisions that influence our growth and sexual development.

Identifying the pathway in the brain whereby nutrition turns into growth and puberty explains a global phenomenon of increasing height and decreasing age at puberty that has puzzled scientists for a century.

Our findings have immediate practical implications for the testing of children with serious delays in growth and pubertal development for mutations in the MC3R.

This research may have wider implications beyond child development and reproductive health. Many chronic diseases are associated with the loss of lean mass, including muscle, with resultant frailty. This responds poorly to simple nutritional supplements such as protein-rich drinks.

The finding that the activity of the MC3R pathway influences the amount of lean mass carried by a person suggests that future research should investigate if drugs that selectively activate the MC3R might help redirect calories into muscle and other lean tissues with the prospect of improving the physical functional of such patients.

Professor John Perry, a senior author on the study from the MRC Epidemiology Unit at the University of Cambridge, said:

This is such an exciting time for human genetics. By analysing the genetic sequences of large numbers of research participants, we can now understand fundamental biological processes that have remained elusive until now.

By combining these studies with experiments in cellular and animal models, we will continue to uncover new insights and understand the mechanisms behind human growth and metabolic disease.

The research was funded by:

Dr Rob Buckle, Chief Science Officer at the MRC, which was a funder of the research, said:

These findings have the potential to make a significant step forward in future management of disorders of growth and puberty, and improvements in the health of those suffering from frailty caused by chronic conditions.

This study shows the value of long-term investment in both large UK population cohorts and multidisciplinary research to discover the underpinning causes of human health and disease.