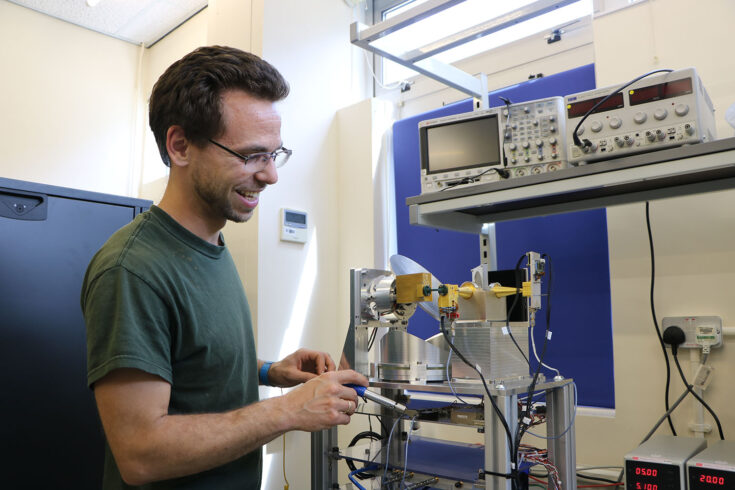 The technology will be available to global markets for use in resilience planning, flood warning and by the shipping industry.

The instrument was developed at the Science and Technology Facilities Council’s (STFC) RAL Space. It has been licenced for space deployment with space-based data and analytics company Spire Global, Inc.

Spire and STFC will work together on a demonstrator mission of the HYMS. This will launch on a 16U Spire satellite, with the long-term objective of launching a full constellation for atmospheric monitoring.

This would, in principle, allow meteorological agencies and markets all over the world to access an additional space-based weather data set. This would allow for more accurate forecasting based on near real-time weather observations.

Satellites are the most important tool in modern weather forecasting, providing over 90% of the data that goes into forecasting models. Truly global weather data can only be gathered from the vantage point of space.

Legacy meteorological satellites are large, cost hundreds of millions of pounds and are similarly expensive to launch. Because of the sheer size and mass of these traditional satellites, typically only two or three are in orbit at any time.

They orbit the Earth twice a day, so the atmosphere is characterised at the same location only once every eight to 12 hours. These limited observation windows are not ideal when monitoring fast-moving global weather events such as hurricanes.

Spire Global harnesses its constellation of 100+ multipurpose small satellites to power highly accurate, global weather forecasts for the world’s key industries and government agencies, such as:

One critical piece of data collected by satellites is microwave sounding information. Optical and infrared imagers cannot see through clouds, whereas microwave sounders give continuous data on temperature and moisture in the atmosphere.

These, along with weather data captured by monitoring radio frequency signals, are essential inputs for computer models used to predict the weather.

RAL Space created HYMS, a microwave sounder that is small, the size of a shoebox, and comparatively inexpensive.

HYMS offers up to four times more frequency resolution than a traditional weather satellite. Because a HYMS sounder is around 50 times smaller, it is possible to launch dozens of them, making a constellation that can image the same part of the atmosphere every half an hour.

This is vital for tracking fast-moving extreme events and monitoring areas with no ground instruments, such as in developing countries or over oceans where weather can change quickly.

This project is a major milestone for our national space strategy. We are developing the UK’s capabilities as a spacefaring nation and in the process boosting the economy and delivering high-skill jobs.

I am delighted the HYMS technology, developed in Oxfordshire, will be put into service by Spire Global. It is further proof of how the UK’s space sector is setting the pace, when it comes to developing products that deliver tangible benefits to businesses and governments.

The HYMS technology we’ve created is more advanced than anything that is currently on the market, and it is extremely exciting to be able to offer its use to industry for space applications.

The improved spectral resolution of our HYMS instrument will provide better atmospheric information for weather forecasting and, when deployed in a constellation of small satellites, a much-reduced interval between measurements.

All this will lead to more accurate weather forecasts, of economic and societal benefit for the UK. HYMS showcases the technology development capabilities within RAL Space and potential for commercial applications.

The technology behind HYMS builds on previous work by RAL Space to develop millimetre wave technology for microwave sounders on board the weather satellites used by national and international meteorological organisations.

The HYMS team have familiarised themselves with the requirements of weather modellers and have worked to produce an instrument that will fill some of the critical gaps in the observations of earlier instruments.

Spire Global will build upon its current, fully deployed constellation of 100+ multipurpose satellites with replenishment satellites carrying the HYMS payload to gather measurements on temperature and moisture in the atmosphere.

The data collected by HYMS coupled with the radio occultation and reflectometry measurements Spire currently collects on atmospheric, surface and space weather data will enhance the value and accuracy of its global weather forecasts.

This partnership will uniquely position Spire to empower governments and companies around the world with significantly enhanced, global observations to help advance understanding and mitigation of the impacts of extreme weather and climate change.

As well as being able to offer this innovative product to industry, the deal brings about the added advantage of stimulating the local economy both in:

With an office at the Rutherford Appleton Laboratory on the Harwell Campus in Oxfordshire, Spire Global will work closely with its new partners RAL Space.

At STFC we aim to catalyse the development of next generation technologies and licence these knowledge assets to our industry partners for commercialisation.

We have worked closely with RAL Space to fund the development of a range of novel technologies with commercial potential and identify businesses excited to adopt them.

HYMS is a great example of this strategy and supports our vision for STFC to drive the adoption of novel technologies by businesses to fuel the growth of a high tech, high skilled UK economy.

The HYMS project has previously received funding from, amongst others: