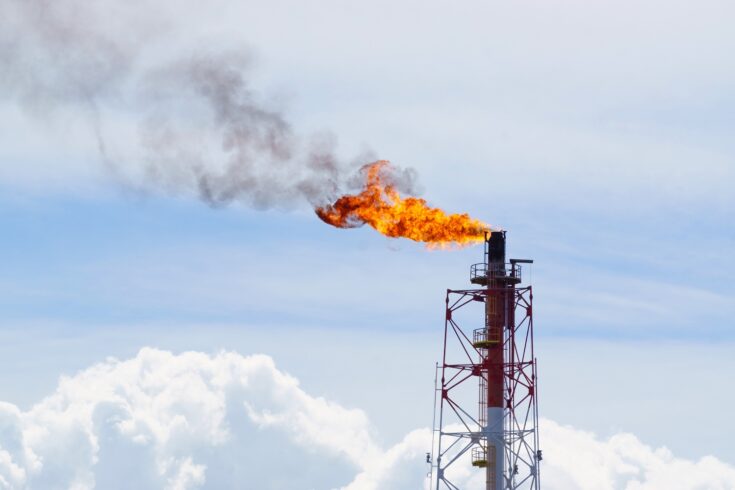 The camera is produced and developed by University of Bristol spinout QLM Technology and funded by the Industrial Strategy Challenge Fund’s commercialising quantum technologies challenge.

It can visualise and measure the amount of gas being lost through leaks from great distances.

This represents a major improvement on current methods of detection, which are time consuming and make measuring the amount lost difficult.

State of the art quantum technology

This camera uses state of the art quantum technology to ‘see the invisible’.

It will help reduce the amount of methane which escapes into the atmosphere through leaks, which is both costly to the oil and gas industry and damaging to the environment.

In the year of COP26, innovations like this that find practical ways of reducing emissions have never been more important.

Methane leaks are nothing to be sniffed at.

If released into the atmosphere, methane is 84 times more potent as a greenhouse gas than carbon dioxide.

This makes large scale emissions many times worse for the atmosphere.

Scientists estimate that if just 3.2% of methane brought up from wells leaks rather than being burnt, natural gas becomes even less eco-friendly than coal.

It is therefore imperative that leaks be minimised or eliminated altogether.

You can’t manage what you can’t measure

The oil and gas majors have pledged to significantly reduce their methane emissions, but you can’t manage what you can’t measure and no-one is measuring methane properly, continuously, and at scale.

The scale of the problem is enormous, with more than half a million active gas wells in North America alone, and many thousands of offshore rigs and gas storage facilities worldwide.

In the UK we have 24 major pipeline compressor stations, which power long-distance natural gas pipes, and hundreds of above ground storage installations. All are leaking at some time.

The camera is the result of the two-year Single Photon Lidar Imaging of Carbon Emissions (SPLICE) project.

It can continuously detect, quantify and model the development of leaks, and notify plant operators immediately when gas escapes.

Existing laser-based systems for methane measuring use complex and costly mirror arrays to reflect light into a conventional detector.

The detector is so sensitive it can detect just a few photons of light and can therefore “see” gas without the need for a mirror.

The universities of Sheffield, Aston and Bristol, meanwhile, are working to expand the range of gases that the new sensors can detect, to include many other greenhouse gases.

This opens up the possibility of using this technology in other sectors, such as agriculture.

QLM has been selected as one of 12 Bloomberg New Energy Futures Pioneers for 2021, from a pool of over 250 applicants.

QLM Technology was founded by its Chief Technical Officer, Dr Xiao Ai, after postgraduate research into single photon Lidar gas detection at the University of Bristol.

He realised that his research, in which a Lidar beam simultaneously probed the shape and concentration of plumes of methane, could help achieve net zero through mitigation of greenhouse gas emissions.

Innovate UK is the major financial backer of the SPLICE project which developed the quantum-enabled camera.

QLM continues to benefit from the expertise of the UK National Physical Laboratory.

The Quantum Technology Enterprise Centre was funded by the Engineering and Physical Science Research Council as a skills and training hub in quantum systems engineering.

The centre is a key part of the UK’s National Quantum Technologies Programme.

It is a world-leading pre-incubator for innovators for quantum inspired technologies.