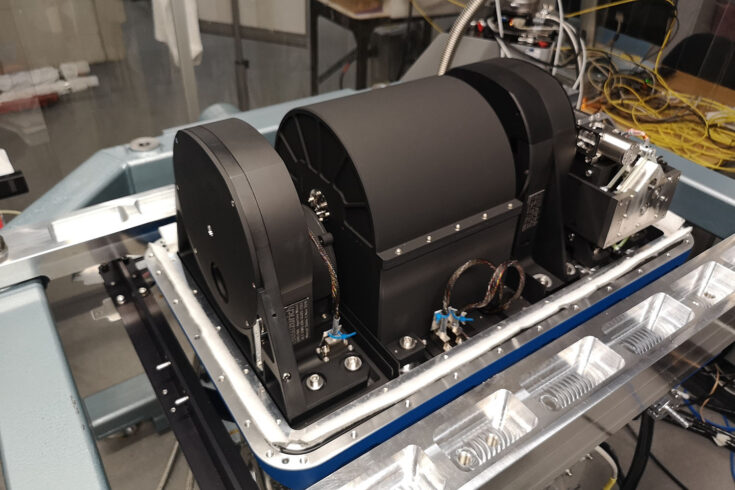 This state-of-the-art, infra-red, cryogenic camera system has been developed with ground-breaking high-contrast imaging technology to allow astronomers to directly image or ‘take pictures’ of these young giants.

These exoplanets, which orbit stars beyond our own Sun, are even more massive than Jupiter, the biggest planet in our solar system.

The NIX camera system is about the size of an average airline hold bag (about 0.8m x 0.4m x 0.6m). In that small space it packs in the sophisticated capability to image exoplanets with its ground-breaking high-contrast imaging technology.

From the UK to Chile via Germany

NIX has been built at the Science and Technology Facilities Council’s (STFC) UK Astronomy Technology Centre (UK ATC) in Edinburgh.

It has been provisionally accepted by the Max Planck Institute for Extraterrestrial physics (MPE) in Germany, which leads the consortia of institutions and partners involved.

About the NIX camera system

The delivery of the NIX camera system from UK ATC in Edinburgh to MPE in Germany is a really important milestone, and means that the process of integrating it into the rest of the instrument can now begin.

Once that is done and we have confirmed that everything is working well together, the completed instrument will be delivered to the VLT in Chile, and astronomers can start to do the exciting science that ERIS will enable.

Dealing with heat and light

Young newly-formed planets are still hot, with temperatures similar to that of a candle flame, about 3-5µm – which is why NIX has been specially designed to image at these wavelengths.

Background thermal radiation, however, becomes a major problem at these wavelengths. All of the different mirrors and optical elements, are ‘glowing’ – essentially giving off light!

Not only that, but direct light from a star can hide its nearby objects, including exoplanets, making it difficult for telescopes and their scientific instruments to see them.

NIX and all of its components need to work at temperatures colder than many instruments, at around -200°C (or 70K), to mitigate for thermal radiation.

To block out the glare from stars, NIX has been designed with a sophisticated system of light blocks, baffles and anti-reflective coatings; as well as high-contrast imaging technology, to make it possible to image these young giant exoplanets.

NIX is particularly challenging because all of this hardware has to fit into a very small space. Mechanisms have been designed and configured, almost in miniature – to be very precise and very stable at these low temperatures.

This is a significant achievement for the team, who have worked incredibly hard in unprecedented circumstances to deliver the NIX camera system to MPE.

During the UK’s COVID-19 response, the team ensured work on the instrument progressed by collaborating via online platforms and setting up a test rig so that the instrument could be controlled and tested from home.

The acceptance by MPE was also done remotely, via multiple web cams and control of the instrument given remotely to the team in Germany.

We are now excited to see NIX integrated into ERIS – and being one step closer to this ground-breaking instrument being operational on the telescope.

The ERIS instrument is expected to be operational in 2022 at one of the world’s biggest and most advanced optical telescopes – ESO’s VLT, at the Paranal Observatory in Northern Chile.

The team at UK ATC thank their collaborators who have contributed significantly to the build of NIX. To:

Thanks too, to The University of Edinburgh’s Institute for Astronomy for their support.

Top image:  The NIX camera in its cryostat (credit: STFC)