Most detailed-ever images of galaxies revealed 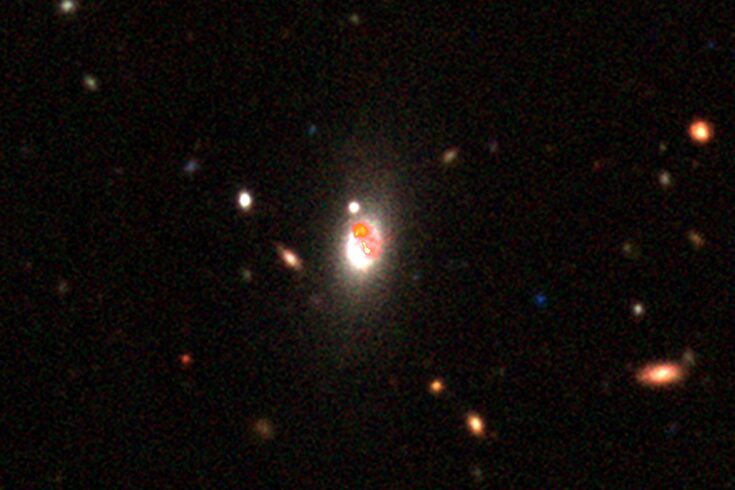 Astronomers have published the most detailed images seen of galaxies beyond our own yet, revealing their inner workings in unprecedented detail.

The images were created from data collected by the Low Frequency Array (LOFAR), a network of more than 70,000 small antennae spread across nine European countries. The results come from the team’s years of work, led by Dr Leah Morabito at Durham University.  Dr Morabito holds a UKRI Future Leaders Fellowship and the team was further supported in the UK by the Science and Technology Facilities Council (STFC).

As well as supporting science exploitation, STFC also funds the UK subscription to LOFAR including upgrade costs and operation of its LOFAR station in Hampshire.

Revealing a hidden universe of light in HD

The universe is awash with electromagnetic radiation, of which visible light comprises just the tiniest slice. From short-wavelength gamma rays and X-rays, to long-wavelength microwave and radio waves, each part of the light spectrum reveals something unique about the universe.

The LOFAR network captures images at FM radio frequencies that, unlike shorter wavelength sources like visible light, are not blocked by the clouds of dust and gas that can cover astronomical objects.

Regions of space that seem dark to our eyes, actually burn brightly in radio waves. This allows astronomers to peer into star-forming regions or into the heart of galaxies themselves.

The new images, made possible because of the international nature of the collaboration, push the boundaries of what we know about galaxies and super-massive black holes. A special issue of the scientific journal ‘Astronomy and Astrophysics’ is dedicated to eleven research papers describing these images and the scientific results.

Better resolution by working together

The images reveal the inner-workings of nearby and distant galaxies at a resolution 20 times sharper than typical LOFAR images. This was made possible by the unique way the team made use of the array.

By using the signals from all of the European antennae, the team have increased the diameter of the ‘lens’ to almost 2,000 km, which provides a twenty-fold increase in resolution.

Unlike conventional array antennae that combine multiple signals in real time to produce images, LOFAR uses a new concept. Whereby, the signals collected by each antenna are digitised, transported to central processor, and then combined to create an image. Each LOFAR image is the result of combining the signals from more than 70,000 antennae, which is what makes their extraordinary resolution possible.

Super-massive black holes can be found lurking at the heart of many galaxies. Many of these are ‘active’ black holes that devour in-falling matter and belch it back out into the cosmos as powerful jets and outflows of radiation. These jets are invisible to the naked eye, but they burn bright in radio waves and it is these that the new high-resolution images have focused upon.

Dr Neal Jackson of The University of Manchester, said:

These high resolution images allow us to zoom in to see what’s really going on when super-massive black holes launch radio jets, which wasn’t possible before at frequencies near the FM radio band.

The team’s work forms the basis of nine scientific studies that reveal new information on the inner structure of radio jets in a variety of different galaxies.

Even before LOFAR started operations in 2012, the European team of astronomers began working to address the colossal challenge of combining the signals from more than 70,000 antennae located as much as 2,000 km apart. The result, a publicly-available data-processing pipeline, which is described in detail in one the scientific papers, will allow astronomers from around the world to use LOFAR to make high-resolution images with relative ease.

Our aim is that this allows the scientific community to use the whole European network of LOFAR telescopes for their own science, without having to spend years to become an expert.

The relative ease of the experience for the end user belies the complexity of the computational challenge that makes each image possible. Because LOFAR doesn’t just ‘take pictures’ of the night sky, it must stitch together the data gathered by more than 70,000 antennae, which is a huge computational task.

To produce a single image, more than 13 terabits of raw data per second, the equivalent of more than 300 DVDs, must be digitised, transported to a central processor and then combined.

To process such immense data volumes we have to use supercomputers. These allow us to transform the terabytes of information from these antennas into just a few gigabytes of science-ready data, in only a couple of days.

The UK institutions involved in the project led by Dr Leah Morabito include:

Read the research papers available on ‘Astronomy and Astrophysics’.

LOFAR was designed, built and is presently operated by ASTRON, the Netherlands Institute for Radio Astronomy. Partner countries in the International LOFAR Telescope include:

Funding for the construction of the Chilbolton station was provided through the LOFAR-UK consortium, representing 22 UK universities, including:

Top image:  An image showing what the radio emission looks like in LOFAR’s high resolution, using a galaxy from Morabito et al. (2021). The improved resolution means we can see all the jet details. Credit: L.K. Morabito / DESI Legacy Imaging Surveys