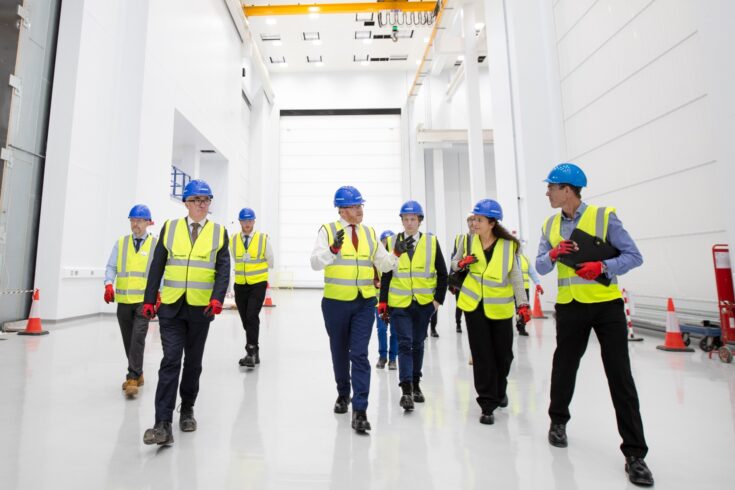 George Freeman, the UK Science Minister has today launched the National Space Strategy (NSS) from the Harwell Space Cluster, the gateway to the UK space sector.

The strategy sets the UK government’s priorities for this high-growth sector, with a vision to:

After the strategy launch, the Minister visited the world-leading facilities on the campus, including the National Satellite Test Facility (NSTF) part of Science Technology Facilities Council’s (STFC) RAL Space.

Setting out a vision

The NSS, which is led by the Department for Business Energy and Industrial Strategy and the Ministry of Defence, sets out the ways the government will:

This strategy shows that space remains a high priority for the government, and STFC will continue to play a vital role in delivering its aims.

With our expertise, state-of-the-art facilities and strong links to space-technology businesses, STFC will continue the drive for the UK to become one of the world’s leading space economies and inspire the next generation of science leaders.

During his visit, the Science Minister visited research institutes and companies within the space cluster to find out more about the campus’ role in supporting the UK’s space sector growth.

Harwell Space Cluster has more space companies within walking distance than anywhere else on our planet.

A globally unique asset, it showcases the UK’s internationally competitive space technology and expertise to a wide audience. Through its stakeholders and companies it is connected to capability across the UK, linking supply chains to international customers.

The Harwell Space Cluster, is looking forward to working with all its partners across industry, academia and public sector to deliver on the National Space Strategy.

One of the flagship facilities of the space cluster is STFC’s own RAL Space. It has worked on 217 instruments that have flown in space, including the recent ESA Solar Orbiter mission and upcoming Webb Space Telescope. RAL Space also offers space science and technology research and development alongside world class facilities to support the UK space sector.

We’re delighted to welcome the Science Minister to the NSTF today. The new facility will play an important role in enabling the UK’s thriving satellite manufacturing industry to grow, offering complete testing for large spacecraft for the very first time in the UK.

We stand ready to help get the latest ideas off the ground.

The Minister announced the strategy at the UK Space Conference, during a visit to the NSTF.

The £105 million UK government-funded NSTF will provide the UK’s first purpose built, comprehensive set of large-scale space test facilities at a single location. It will:

The NSTF is creating 35 new RAL Space jobs and will support growth and inward investment of UK space companies.

The building work for the NSTF is being finalised for RAL Space by construction firm Mace at the Rutherford Appleton Laboratory (RAL) site on the Harwell Campus in Oxfordshire. RAL Space will welcome the first customers after commissioning is completed in 2023.

Capable of undertaking full test campaigns for spacecraft up to seven tonnes, the NSTF has been purpose built as a dedicated test facility for commercial and science satellites.

About the Harwell Space Cluster

Having these anchor organisations with significant open access facilities has attracted many companies to set up operations at Harwell.

Since 2010 the cluster has grown to 105 space organisations, employing over 1,100 people. Companies within the cluster range from:

High growth disruptive companies like Rezatec and Oxford Space Systems have been supported by the unique ecosystem from start-up to now having their own facilities. For international delegations, including inward investors, the cluster acts as a showcase to understand the latest developments in technology and applications across the UK space sector.