New £60 million investment for particle physics research in the UK 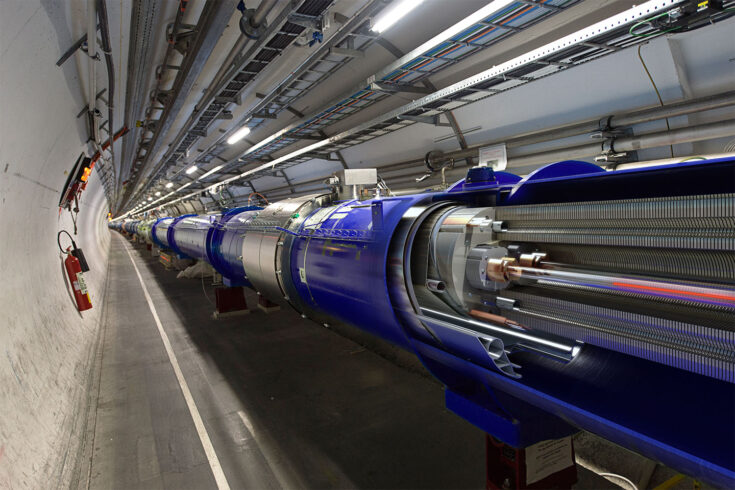 Science and Technology Facilities Council (STFC) is investing £60 million as part of its continued support to the particle physics research community in the UK.

This funding helps to keep the UK at the forefront of answering some of the biggest and most complex questions in science and supports the next generation of UK particle physicists.

Particle physics studies the world at the smallest possible distance scales and the highest achievable energies, seeking answers to fundamental questions about the structure of matter and the composition of the universe.

Ten years after the UK researchers’ contribution to the Nobel Prize winning detection of the Higgs boson, some of the questions that the community is working to answer are:

STFC continues to support the experimental particle physics community in the UK in answering fundamental questions about our universe.

The grants are vital in supporting technicians, engineers and academics in their skills and expertise in the field, all while encouraging career development in fundamental research with both universities and international collaborators.

This investment underpins the UK physics community and enables continued UK leadership in the field of experimental particle physics.

Through the grants, the council supports UK researchers working in CERN and its Large Hadron Collider (LHC) detectors, including:

Research teams funded by the UK are working on solving ground-breaking challenges in particle physics, including the:

These are all key questions in fundamental physics to which we still do not have answers.

The STFC-funded academics are actively involved in cutting-edge experiments in these areas, such as:

Summaries of the funded work

The University of Edinburgh, £2.81 million

The grant will allow The University of Edinburgh group to participate in major experimental efforts over the next three years at CERN and other world-leading labs globally.

These experiments aim to address key questions in physics, such as the:

The University of Sheffield, £2.68 million

Sheffield scientists also use the ATLAS detector to search for new particles and run next generation neutrino experiments in Japan (T2K, Super-K, Hyper-K) and the US (Short-Baseline Near Detector (SBND), DUNE). This is to observe subtle differences between particles and antiparticles.

KCL focuses its particle physics work on the main open challenges in science that can be answered by neutrinos physics through the T2K, Super-K, Hyper-K, SNO+ and IceCube experiments.

Future work on Super-K will focus on the exploitation of the study of very high-energy cosmic neutrinos.

The work on SNO+ experiment will be focused on the flagship measurements of the neutrino-less beta decay search.

The IceCube experiment to improve the sensitivity when looking for new physics and for very high energy atmospheric neutrinos and their possible extragalactic origin.

UCL’s high energy physics group works at the high-energy frontier. It examines the nature of the Higgs boson at the LHC and preparing for new, higher-intensity collisions that may reveal evidence of physics beyond the Standard Model (SM).

The group leads several experiments probing the properties of the most abundant matter particle in the universe, the neutrino.

These experiments will measure the asymmetry between matter and antimatter in the neutrino sector and may cast light on the mechanism that has generated the cosmological matter-antimatter asymmetry.

UCL also leads UK efforts to measure the flux of the highest-energy cosmic-ray neutrinos and is pursuing several experiments to further examine the properties of the muon.

Through the grant, UCL will also aim to continue the program of detector and accelerator research and development (R&D) focused on medical applications, building on a recent UCL track record in this area.

The University of Warwick elementary particle physics group is making key contributions at the frontiers of high energy and flavour physics at CERN’s ATLAS and LHCb experiments.

They are involved in the quest to understand the neutrino through contributions to the T2K, Hyper-K and DUNE neutrino oscillation projects.

The group is helping to develop the next generation of dark matter and neutrino-less double beta decay experiments and have activities in detector development, including the use of new quantum technologies.

The new grant will also allow an expansion of the University of Warwick’s work in general software development for particle physics.

The University of Manchester, £4.6 million

The particle physics group at The University of Manchester exploits the data collected by two of the main experiments at the LHC, which collide protons at the highest energies currently accessible by accelerators.

At the ATLAS experiment, the group tests the SM of particle physics and searches for new types of particles (or particle interactions) not predicted by the SM.

These studies include searches for dark matter and anomalous Higgs or electroweak boson interactions.

At the LHCb experiment, the group studies the properties of particles that contain bottom or charm quarks.

Another priority of The University of Manchester’s research programme is understanding the properties of the neutrino through involvement with DUNE, SBND and MicroBooNE experiments and the SuperNEMO detector.

Manchester researchers are also involved in the construction the DarkSide-20k experiment to search for dark matter from space and in the Mu2e and the Muon g-2 experiments aiming to understand anomalous interactions of the muon.

The STFC grant will allow the centre to continue its growth and its influence in the field both in the UK and internationally.

Over the next three years, Royal Holloway’s experimental activities, underpinned by this grant, will include major contributions to the ATLAS experiment at the LHC and DarkSide-20k dark matter experiments, amongst other projects.

The University of Glasgow group will focus its efforts in:

The group is simultaneously entering a major construction phase, building upon the synergies established between its ATLAS and LHCb detector developments.

Glasgow researchers are also working on an active neutrino oscillation experiment, T2K, and will work towards a third-generation experiment, Hyper-K, that is aiming to discover CP violation in neutrinos.

The grant will enable the University of Oxford to use the future data collected by the ATLAS experiment in Run 3 of the LHC to:

Oxford will play a significant role in commissioning the LHCb upgrade.

The Oxford group will play a major role in constructing the next generation accelerator neutrino experiments:

The Oxford group is involved in Mu3e and T2K experiments and will search for neutrino-less double-beta decays using SNO+.

The group will continue the exploration of the dark universe, searching for dark matter with the LZ detector in the US and dark energy with the Rubin Observatory in Chile.

Oxford researchers will use quantum technologies for fundamental physics to detect low-mass dark matter and gravitational waves using AION, a 10-metre atom interferometer to be deployed in Oxford’s Beecroft Building.

The University of Liverpool will focus on finding answers to some of the most pressing questions in particle physics. Questions such as understanding the nature of dark matter or why we live in a universe that appears to almost entirely devoid of anti-matter particles.

This grant will continue Imperial College London’s exploitation of the CMS and LHCb experiments at the LHC, preparing for the high luminosity upgrade of the LHC.

Imperial College London is involved in:

Through the SoLid and SuperNEMO experiments, the Imperial group will address the very short baseline neutrino anomaly and whether the neutrino is its own antiparticle.

The group will continue its activity in searching for direct evidence of a dark matter candidate through the LUX-ZEPLIN experiment, along with preparations for the next generation detector.

The new AION experiment will use quantum technologies to probe for ultra-light dark matter, and, in time, gravitational waves.

The Brunel group will use the datasets produced by CMS to study the production and properties of the top quark, a SM particle with unique properties.

The group also aims to search for exciting evidence of the breakdown of the SM, such as observing flavour changing neutral currents (FCNC).

The grant awarded to the University of Bristol will finance various work: from analysing data produced at the CERN LHC to adapting specialist technology for industrial applications.

The research will include:

The grant will also support preparations for future experimental work at the LHC and elsewhere, and knowledge exchange activities in medicine, security and beyond.

The University of Birmingham particle physics group built, maintains and operates a major part of the on-detector electronics on ATLAS.

Part of the team works on the detailed properties of the Higgs boson, the production and decays of the top quark and the subtle interactions between the carriers of the weak and electromagnetic forces.

Beyond ATLAS, the group is prominent in studying the decays of heavy quarks, which offer complementary sensitivity to new phenomena.

University of Birmingham teams are also working on upgrades for accelerator and detectors of the LHC for future phases in the same era.

In their R&D, the University of Birmingham is applying detectors developed in particle physics to new medical techniques such as hadron beam therapy and doing precision timing measurements.

Queen Mary University of London (QMUL) researchers will look for new particles and phenomena that could lead to a deeper understanding of nature.

The funding will allow academics from the Particle Physics Research Centre at QMUL to look deeper into the nature of the Higgs boson. This could help them learn more about why we live in an unbalanced universe: all matter and no antimatter.

One of the ways to achieve that is through observing deviations from predictions in precision measurements and through searching for exotic forms of matter, including monopoles, which were hypothesised nearly a century ago.

The grant will also enable the QMUL group to construct precision instruments for the ATLAS and DUNE experiments.

The University of Sussex group will continue to deliver science at the forefront of the field. This is aligned with the recommendations from the latest European strategy for particle physics, through leading involvement in the top priority areas for STFC:

The particle physics group in the University of Cambridge is striving to discover more about physics beyond our current understanding, including:

The grant will enable the University of Cambridge to continue to make significant contributions to current and future experimental programmes of the ATLAS and LHCb in CERN, and the neutrino programme in Fermilab.

The group will focus on investigating the dominance of matter over antimatter in the universe, precise measurements of the SM and those of theories that go beyond that theory.

The programme utilises facilities around the world, including CERN (Switzerland or France), Fermilab (USA), JPARC (Japan) and SNOLab (Canada).

The group participates and leads many activities in the CERN-based (ATLAS and NA62) and neutrino (DUNE, T2K, HK, MicroBooNE, SBND) experiments.