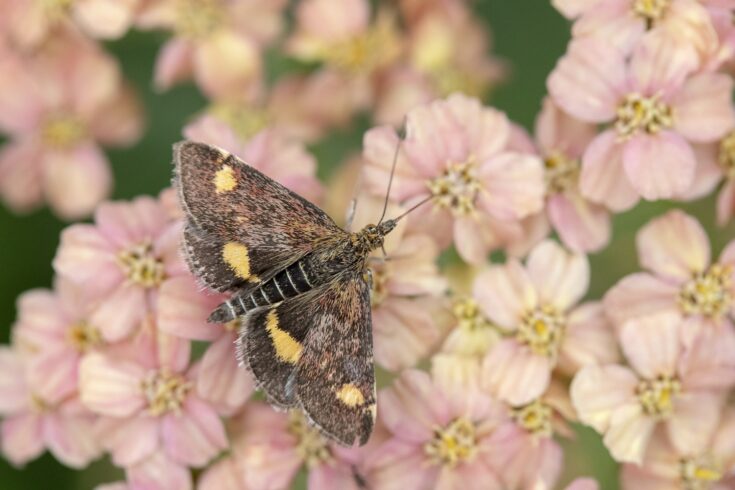 A new report on the state of Britain’s larger moths shows a worrying 33% decline in their populations over the last 50 years.

The report, the last of which was released in 2013, pulls on tens of millions of records gathered through the Rothamsted Insect Survey and National Moth Recording Scheme.

It shows that the total abundance of larger moths in Britain decreased by 33% over a 50-year period between 1968-2017. This decline was seen across Britain with a greater loss in the south (39% decrease) than in northern Britain (22% decrease).

Habitat destruction a major cause

The causes for the decline are mixed, though the common factor is human activity.

Habitat destruction and deterioration resulting from changes in land management and chemical pollution are considered the major causes. More sympathetic management (for example, through agri-environment schemes) often leads to increased abundance and species richness of moths.

Artificial light at night also has negative effects on individual moths and, of course, a huge factor is climate change.

Warmer climates mean species located in southern regions are tending to expand further northwards, while also causing declines for moths that are adapted to cooler climates. One example is the Grey Mountain Carpet, which has seen an 81% decrease in distribution.

Halting or reversing species decline is an enormous task, but it’s not impossible. The report contains numerous examples of conservation success for very rare and threatened moths. Work by Butterfly Conservation, its partners and volunteers has shown real results in recent years in reversing species at risk of extinction.

Dr Richard Fox, Associate Director of Recording and Monitoring at Butterfly Conservation and lead author of the report says:

This decline is worrying because moths play a vital role in our ecosystems. They are pollinators of many plants, with some wildflowers, such as orchids, relying on visiting moths for reproduction. They also provide essential food for thousands of animal species, including bats and many familiar birds.

We’re lucky enough to have almost 900 species of larger moths in Britain (including micromoths Britain has a total of 2,600 species). Because moths are dwindling, we can be pretty sure that other wildlife are also in decline and that our wider environment is deteriorating.

Comparing this latest State of Britain’s larger moths to the first edition in 2006, it is a disappointment that the situation has not improved. It is clear that a much bolder policy of habitat protection and restoration will be needed if British moths are to thrive well into the future.

Our analysis of the millions of records showed that, over the past 50 years, 4 times as many moth species decreased in abundance as increased. It is possible that our rarest species, for which we cannot easily produce reliable trends, are facing even greater threats to their populations.

Read the report in full.

Butterfly Conservation is the UK charity dedicated to saving butterflies, moths and our environment. Our research provides advice on how to conserve and restore habitats. We run projects to protect more than 100 threatened species and we are involved in conserving hundreds of sites and reserves.

The UK Centre for Ecology & Hydrology

The UK Centre for Ecology & Hydrology is a centre for excellence in environmental science across water, land and air. Our 500 scientists work to understand the environment, how it sustains life and the human impact on it – so that together, people and nature can prosper.

We have a long history of investigating, monitoring and modelling environmental change, and our science makes a positive difference in the world. The UK Centre for Ecology & Hydrology is a strategic delivery partner for the Natural Environment Research Council, part of UK Research and Innovation.

Rothamsted Research is the longest-running agricultural research institute in the world. We work from gene to field with a proud history of ground-breaking discoveries. Our founders, in 1843, were the pioneers of modern agriculture, and through independent science and innovation, we continue to make significant contributions to improving the sustainability of agri-food systems in the UK and internationally.

Our strength lies in our systems approach, which combines science and strategic research, interdisciplinary teams and partnerships. Rothamsted is also home to 3 unique resources, open to researchers from all over the world: The Long-Term Experiments, Rothamsted Insect Survey and the North Wyke Farm Platform.

We are strategically funded by the Biotechnology and Biological Sciences Research Council (BBSRC), with additional support from other national and international funding streams, and from industry. We are also supported by the Lawes Agricultural Trust (LAT).

The Rothamsted Insect Survey, a National Capability, is funded by BBSRC under the Core Capability Grant BBS/E/C/000J0200.