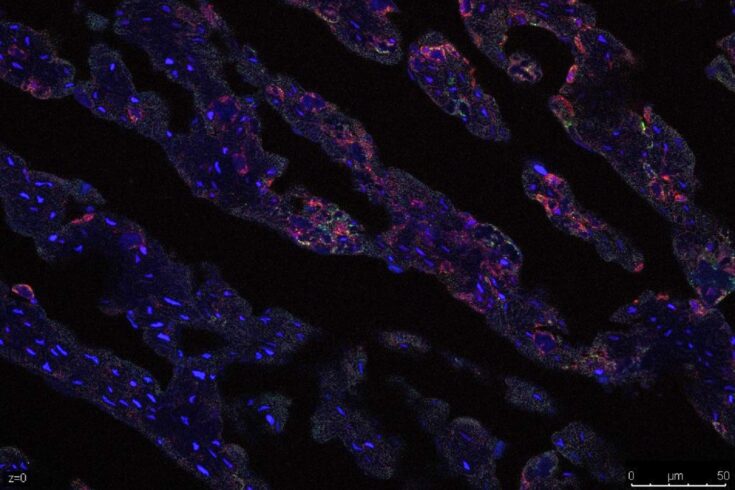 In this highly unusual case reported in BMC Veterinary Research, FMDV was identified in a sample of heart tissue received by Pirbright’s diagnostic laboratory, the World Reference Laboratory for Foot-and-Mouth Disease (WRLFMD).

The sample was from one of five young dogs that had died after being fed the carcases of lambs which died during an FMD outbreak on a farm in Iran.

FMD usually spreads between cloven-hooved animals (like cattle, pigs and sheep) through direct contact with infected animals or contaminated surroundings.

The disease causes loss of weight, milk production and an increased chance of abortion in adults. Juveniles are more likely to suffer from severe disease and mortality if the virus spreads to the heart.

This is the first reported case of its kind. Given the widespread distribution of FMD in certain regions of the world, this presentation of the virus is assumed to be extremely rare.

The report contains no evidence that dogs can contract the disease from live infected animals or that they are capable of spreading the disease as a result of being infected.

It does, however, further highlight the dangers of feeding livestock carcases to other animals where FMD is in circulation.

This is an extra consideration for the veterinary profession in countries where FMD is continuously present and where similar case presentations could arise. The report does not present any evidence that humans can become infected and FMD is not considered a public health threat.

The prompt communication between the WRLFMD and Iran Veterinary Organization resulted in us being able to acquire a sample from an interesting case presentation of disease in dogs during an outbreak of FMD in Iran.

By applying the wide array of analytical methods we have in place at The Pirbright Institute, we were able to identify and report the first case of naturally acquired FMD infection seen in dogs.

Although the case report is unable to provide more definitive answers about the circumstances needed for infection to occur in dogs or how frequently this occurs, it does raise awareness that canine infection can occur in specific circumstances and serves as a reminder of the potential dangers posed by using carcasses from farms to feed other animals.

This work was funded by the Department for Environment, Food and Rural Affairs, the Biotechnology and Biological Sciences Research Council (BBSRC), part of UK Research and Innovations (UKRI) and the European Commission.