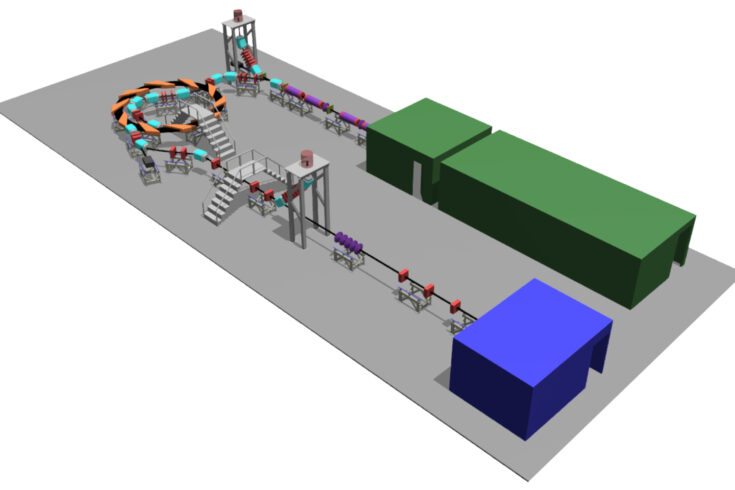 Clinicians, biologists and physicists are pooling their expertise to design a pioneering radiobiology facility for the nation that is intended to make proton beam therapy for cancer treatment a reality.

The unique collaboration has resulted in a new proposal funded by the Science and Technology Facilities Council (STFC) for the Laser-hybrid Accelerator for Radiobiological Applications (LhARA).

By investigating how radiation from a proton beam interacts with biological matter when it is used to kill cancer cells LhARA will act as a test-bed for new machines that will be able to deliver faster and more effective radiotherapy to cancer patients with reduced side-effects.

Radiation therapy is an established treatment for many cancers. Conventionally, it is delivered by machines that accelerate electrons to produce high-energy X-ray beams directed at a tumour to kill cancer cells. However, as the X-ray beam passes through the body, healthy tissue and organs are also damaged.

Machines that accelerate a beam of protons can target their tumour-destroying properties more precisely by depositing nearly all their energy at the site of the tumour, thereby avoiding damage to the tissue surrounding the tumour.

The proton machines currently in use are large and extremely expensive and most deliver only one type of ion beam, usually protons (hydrogen) and carbon.

Scientists have been investigating the use of laser-driven proton and ion beams for cancer treatment for some time. This new method could greatly reduce the size and cost of the machines and increase flexibility to deliver a wide range of ion beam species. The combination would allow clinicians to deliver the best treatment plan for patients.

The proposed new facility brings this a step closer by combining knowledge and technology from the established accelerator community alongside the expertise of clinicians. It will help improve and shape the beams from laser accelerators to make them good enough for radiobiology studies. 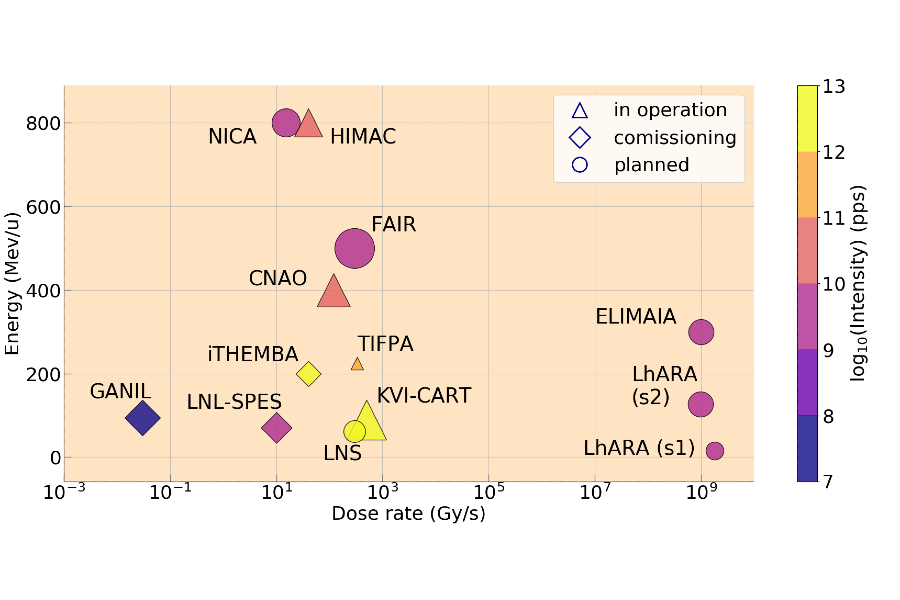 Comparison of the projected performance of LhARA at stage 1 (S1) and stage 2 (S2) with the performance of other facilities that provide, or plan to provide, beams for radiobiology. (Credit: LhARA consortium)

LhARA is bringing together a multidisciplinary team of experts to drive forward the exploration of novel, next-generation laser-accelerator technology for radiobiology and, eventually, an important societal impact such as particle beam cancer therapy.

It will use a high-power pulsed laser to accelerate a bright pulse of protons or light ions.

The beam is very intense and can be pulsed 10 times a second.

As a hybrid accelerator, LhARA will combine established technology with the unique features of a laser accelerator. As a result, LhARA would be able to deliver much higher dose rates of radiation than any other approach currently available. It would also be capable of delivering high doses of radiation to multiple labs at the same time, allowing multiple experiments to be performed in parallel.

This design is unique to LhARA and will help researchers discover not just how cancer cells are killed by radiation therapy, but also more about how radiation affects processes in cells such as how they age.

LhARA will provide a future opportunity for biologists to access a unique particle beam therapy resource and associated facilities, whose availability are currently limited not only in the UK but also worldwide.

Research using this resource will drive and enhance our understanding of the impact of specific particle ions, for example,  proton and carbon ions on 2D/3D cell and tissue models, particularly those from specific cancers.

This will greatly assist in the identification and development of optimal strategies using particle beam therapy for killing cancer cells, whilst limiting the damage to the healthy normal tissues, which can be translated to the clinic for optimal patient cancer treatment.

The design and specification of LhARA would make it a unique place in the UK and around the world for radiobiological science.

The proposal for the facility is published in Frontiers in Physics: Medical Physics and Imaging.

Top image:  A 3D render of the design for the proposed Laser-hybrid Accelerator for Radiobiological Applications (credit: LhARA consortium)