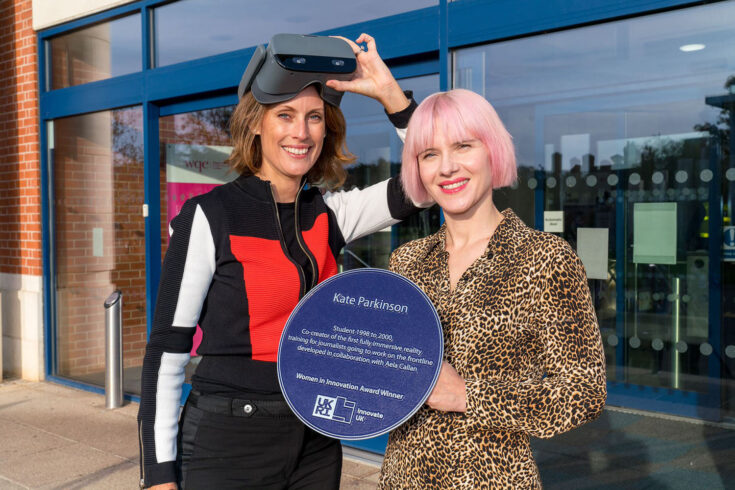 Purple plaques have been unveiled in schools across the UK to recognise the achievements of Women in Innovation Award winners to inspire more girls into STEM.

The purple plaques are being affixed to the walls of the schools that 40 award winners attended.

Today, 11 February, is the day that the United Nations marks the International Day of Women and Girls in Science.

Women in Innovation Award winners receive a cash injection of £50,000 and bespoke mentoring to scale up and bring to market their pioneering business ideas.

These winners form a network that is developing pioneering innovations to tackle pressing societal, environmental, and economic challenges.

Among those celebrated is Celia Pool, a former pupil of St Mary’s School, Calne, Wiltshire.

Celia won the Women in Innovation Award in 2021 with her idea to set up DAME to make periods positive for people and the planet.

She has designed the world’s first reusable applicator and has recently launched reusable pads, that aims to tackle the vast amount of plastic waste created by the feminine care industry.

She is also setting up a five-day programme to share her skills with 20 girls from the UK with diverse backgrounds so they can learn about launching their own innovative products.

Others honoured by purple plaques are listed below.

Kate founded Headset to provide virtual reality training to journalists working in hostile locations. She had her plaque unveiled at WQE College in Leicester.

Emma founded the Library of Things to provide consumers with a sustainable, affordable alternative to purchasing occasional-use products.

She had her plaque unveiled at the Watford Grammar School for Girls in Hertfordshire.

She had her plaque unveiled at St. Mark’s Catholic School in Essex.

Samantha co-founded Cecence build a greener future through the use of lightweight composite materials for aerospace, rail and architecture. She had her plaque unveiled at John F Kennedy Catholic School, Hertfordshire.

She will have her plaque unveiled on 14 February at Kemble Primary School, Gloucs.

Fanzi’s company, DPS Designs, supports mould making for the chocolate industry and a toolmaking for the aerospace industry. She had her plaque unveiled at Trellech school in Monmouthshire, Wales.

There are thousands of blue plaques across the UK, 900 in London alone, celebrating the achievements of influential and pioneering figures. Yet, women feature on fewer than one in seven of them.

This highlights a national issue of the under-representation of women in the media and in leadership roles, whether in the workplace or in the education system. This results in a lack of relatable role models for children and young people.

Innovate UK hopes the purple plaques will inspire more girls to get into science, technology, engineering and mathematics (STEM) subjects and follow in the award winners’ footprints.

Research shows that 78% of female entrepreneurs did not have business role-models of the same gender as them. Though they can, of course, find inspiration in their male counterparts the lack of relatable role models is likely having a huge, but hidden, impact on UK innovation.

Again, this lack of female representation results in a lack of inspiration for the next generation. This is exactly why we unleashed out purple plaque’s initiative, to end the cycle of low-visibility by commemorating today’s trailblazing women in innovation.

Helping the next generation

I’m so excited to be recognised in this way. School played such a big part in setting me on my journey and I want to help the next generation realise their ambitions.

It’s critical that young people have strong role models to follow and I’m humbled to be recognised in this way. I hope it helps other young women with dreams of starting their own business to have the confidence to give it a shot.

Innovate UK launched Women in Innovation in 2016, after research revealed that just one in seven applications for Innovate UK support came from women. Boosting the number of female entrepreneurs could deliver £180 billion to the economy.

The aim was to get more women with excellent ideas innovating within UK businesses. Women in Innovation is part of Innovate UK’s commitment to promote greater diversity and inclusion in business innovation.

The programme seeks to find women with exciting, innovative ideas and ambitious plans that will inspire others. The awards are for female founders, co-founders or senior decision makers working in businesses that have been operating for at least one year.

The programme support includes a £50,000 grant for each individual, as well as a bespoke package of mentoring, coaching and business support.

The campaign and awards programme in 2016 and 2018 have had a huge impact so far. The number of women applying to Innovate UK’s funding and support has increased by 70%. The Women in Innovation Awards 2020/21 will build on this success.

Find out more about the Women in Innovation programme.

This five-day training programme allowed her to share her skills with 20 girls from the UK with diverse backgrounds so they can learn about launching their own innovative products.