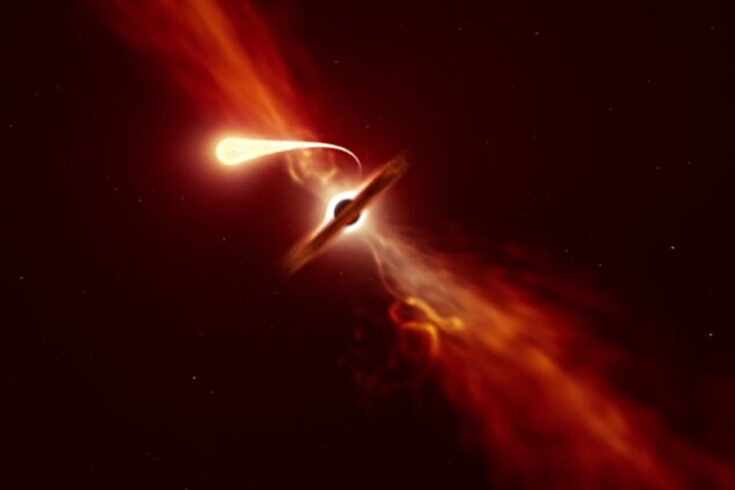 A team of scientists led by the UK have glimpsed the final blast of light emitted from a star before it is sucked into a supermassive black hole.

The international research team, led by the University of Birmingham, used telescopes from around the world to make this rare observation, including:

The phenomenon, known as a tidal disruption event, is caused when a star passes too close to a black hole and the extreme gravitational pull from the black hole shreds the star into thin streams of material – a process called ‘spaghettification’.

During this process some of the material falls into the black hole, releasing a bright flare of energy which astronomers can detect.

Imaging this exciting event demonstrates the power of a multi-wavelength approach to big science, using data from a number of telescopes and space missions.

It highlights discovery enabled by capabilities supported by STFC and by UKSA working together.

When sky surveys noticed emissions from the tidal disruption event, the team pointed a host of ground and space-based telescopes at the light source, including the UK Space Agency-supported Swift satellite, and were able to monitor the bright light in unprecedented detail as they watched it fade away.

The idea of a black hole ‘sucking in’ a nearby star sounds like science fiction. But this is exactly what happens in a tidal disruption event

says lead author Dr Matt Nicholl, a lecturer and Royal Astronomical Society research fellow at the University of Birmingham, who went on to say:

We were able to investigate in detail what happens when a star is eaten by such a monster.

The research will help astronomers better understand supermassive black holes and how matter behaves in the extreme gravity environments around them.

Top image:  A star experiencing spaghettification as it is sucked in by a supermassive black hole during a ‘tidal disruption event’. With the help of ESO’s telescopes astronomers found that when a black hole devours a star, it can launch a powerful blast of material outwards. (Credit: ESO/M. Kornmesser)