UK contributes to a breakthrough in nuclear fusion energy 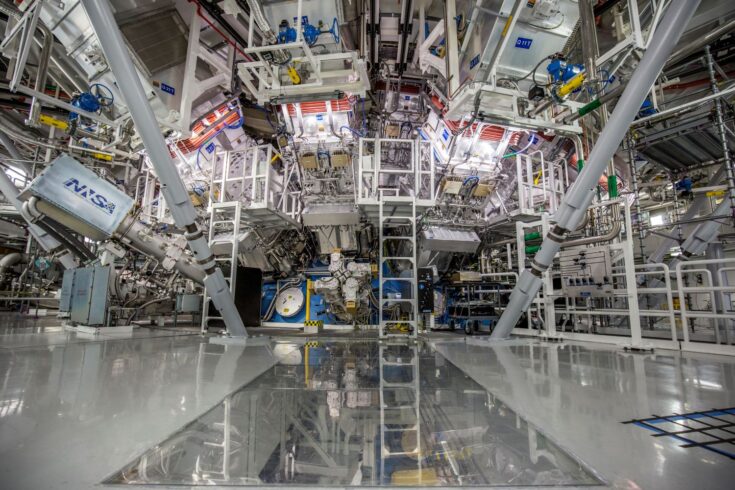 In an international collaboration, that included colleagues from the UK’s Central Laser Facility, scientists at Lawrence Livermore National Laboratory have achieved the ‘holy grail’ of fusion research.

For the first time they have been able to produce more fusion energy than energy input into the experiment.

The National Ignition Facility (NIF), California, is a huge laser facility roughly the size of a football stadium.

Fusion has the potential to provide a near-limitless, safe, and clean source of carbon-free energy. Fusion energy could complement renewables by filling supply-gaps and move us away from fossil-fuels.

It could also help in replacing a considerable fraction of the $3.5 trillion per year fossil fuel industry.

Scientists have not been able to generate more fusion energy than was used to hold fuel in place, until now.

Dr Robbie Scott, Senior Plasma Physicist, Science and Technology Facilities Council Central Laser Facility, and Chair of the UK Inertial Fusion Consortium, is a member of the research team working on this project and said:

It cannot be understated what a huge breakthrough this is for laser fusion research. More importantly, however, is the fact that it paves the way for the rapid development of Laser Inertial Fusion Energy, power generation by laser fusion.

This is a fantastic result that proves the exceptional potential of fusion power, and the National Ignition Facility team should be congratulated on their outstanding achievement.

I’m proud that the Department of Business, Energy and Industrial Strategy-funded Central Laser Facility were also able to play a part in supporting the endeavour.

Though there is still some way to go to deliver fusion power generation at scale, results like this one illustrate that there is a viable route to commercial fusion energy ahead, and the UK is in pole position to build on this work towards a clean energy future.

In the recent NIF experiment, 3.15 megajoules (MJ) of fusion energy was produced while the lasers produced an input of 2.05MJ of laser energy into the target chamber.

On this record experiment, NIF achieved a gain of 1.54, or 1 and a half times the energy input.

While significantly higher energy gain will be required for power production, this represents an enormous step forward and achieves for the first time the so-called ‘holy grail’ of fusion research.

Dr Robbie Scott went on to say that:

The experiment demonstrates unambiguously that the physics of laser fusion works. A lot of work remains to transform NIF’s results into power production, but this is a key step along the path.

Next steps include the demonstration of even higher fusion energy-gain and the further development of more efficient methods to drive the implosion.

We have very well-developed plans for how to go about this and hope these results will help stimulate the funding required to drive our work forward at the pace required to make an impact on global warming.

The approaches to fusion

The laser fusion approach, as used by NIF, uses lasers to hear the surface of a spherical shell containing a deuterium and tritium fuel.

This was done indirectly by NIF where the energy from the laser was converted into X-rays before heating the shell.

The beams are fired towards a small hollow target containing fusion fuel, deuterium and tritium. The beams are switched on for just a few billionths of a second and deliver approximately 175 times the average global electricity power to the target.

The target implodes inwards on itself at over 1 million miles per hour to heat and compress the fusion fuel to replicate the conditions at the centre of the Sun.

This is where the fusion reactions start to occur and release both neutrons and alpha particles. The neutrons escape, but the alpha particles deposit their energy in the dense fuel, heating it even more.