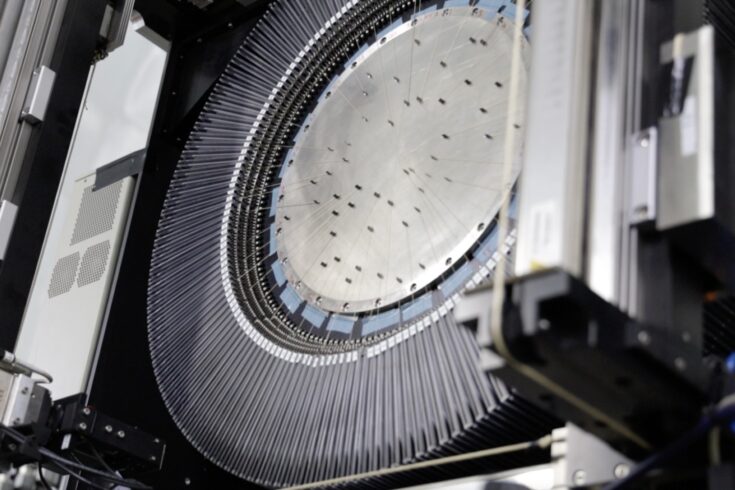 A major telescope upgrade has peered through to the distant Universe to reveal the spectra of a pair of galaxies 280 million light years away from Earth.

The spectra provide a first glimpse of the sky from the WHT Enhanced Area Velocity Explorer (WEAVE).

This is a unique upgrade to the William Herschel Telescope (WHT) in La Palma on the Canary Islands.

After its integration into the WHT last year, WEAVE has now begun its on-sky commissioning phase.

It is now ready to reveal more than 12 million spectra of stars and galaxies over the next 5 years.

The Science and Technology Facilities Council (STFC) is one of the key partners in the operation of the WHT.

Understanding the Universe through spectra

Spectroscopy is an essential element in an astronomer’s toolbox.

A galactic spectrum is the combination of spectra from the millions of stars in an observed galaxy.

Studying the features of a galaxy spectrum allows astronomers to understand what types of stars the galaxy contains, and the relative abundances of each type of star.

This tells us about how the galaxy formed and changed over time.

Observing the heart of galaxies

First-light observations with WEAVE were carried out with the large integral-field unit (LIFU) fibre bundle, 1 of WEAVE’s 3 fibre systems.

The team observed the heart of the galaxy group Stephan’s Quintet, a group of 5 interacting galaxies.

The instrument was aimed at NGC 7318a and NGC 7318b, a pair of galaxies at the centre of a major galaxy collision 280 million light-years from Earth in the constellation Pegasus.

Power and flexibility of WEAVE

The wealth of complexity revealed in this way by a single detailed observation of this pair of nearby galaxies provides insights into the interpretation of the many millions of spectra that WEAVE will obtain from galaxies in the distant Universe and provides an excellent illustration of the power and flexibility of the WEAVE facility.

The WEAVE LIFU measures separate spectra for 547 different regions in and around the 2 galaxies, recording the colours of their light from the ultraviolet to the near-infrared.

This data will help astronomers learn how galaxy collisions transform the galaxies in the group.

In the coming 5 years, the Isaac Newton Group of Telescopes (ING) will assign 70% of the time available on the WHT to 8 major surveys with WEAVE.

The surveys will be selected out of those proposed by the astronomical communities of the partner countries.

All these surveys require spectra of up to millions of individual stars and galaxies, a goal now obtainable thanks to WEAVE’s ability to observe almost 1,000 objects at a time.

Over 500 astronomers from across Europe have organised these 8 surveys, covering studies of:

WEAVE will study galaxies near and far to learn the history of their growth, and will obtain millions of spectra of stars in the Milky Way.

As one of the key partners operating the William Herschel Telescope, STFC is proud to have a major contribution in the overall design, systems engineering and software control for its newest upgrade, WEAVE.

This first light event is a milestone for both the international and UK astronomy communities: WEAVE will provide spectra of millions of stars and galaxies over the next 5 years.

After 10 years in development, WEAVE will now finally offer astronomers a new eye to the sky to help them answer questions such as what is dark matter and how did stars form in distant galaxies?

The main components of WEAVE are:

The ING is operated on behalf of:

Top image:  A WEAVE field with fibres placed by 2 robots (out of frame), on location in the WHT. Each individual fibre is 120 microns in diameter enclosed in protective tubing. Credit: Samantha Firth, STFC