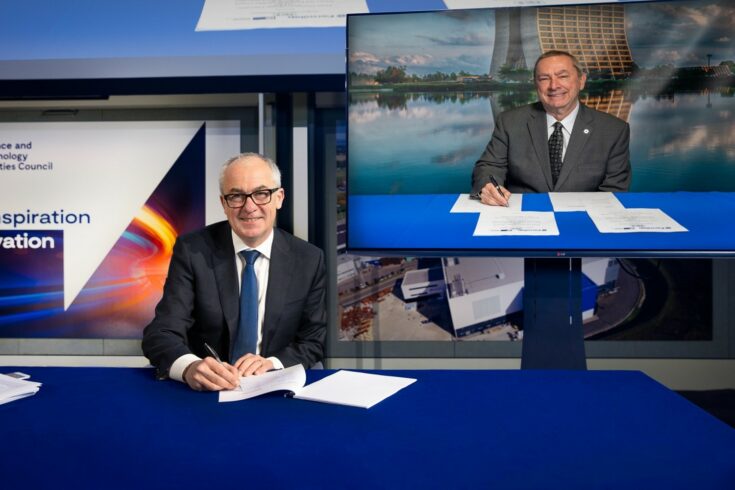 STFC and US-based Fermi National Accelerator Laboratory have agreed to collaborate on building one of the world’s most powerful linear accelerators.

Based at the US Department of Energy’s Fermilab, the Proton Improvement Plan-II (PIP-II) accelerator, currently under construction, is an essential upgrade to the accelerator complex. Once complete, it will enable the world’s most powerful high-energy neutrino beams.

This will allow physicists to study the elusive neutrino particle. Known for having very little mass, it travels near the speed of light and possibly holds the secrets to some of the biggest unanswered questions in physics.

The UK and the PIP-II accelerator

Today’s agreement sets out how the UK will contribute to the PIP-II accelerator project. The project provides the engine for the highly-anticipated global science experiment, the Deep Underground Neutrino Experiment (DUNE), hosted by Fermilab.

DUNE is an international flagship science experiment designed to study neutrinos. Results from studies looking at the neutrino particle could potentially revolutionise our understanding of the universe.

The PIP-II accelerator will also power a suite of other experiments at Fermilab. Its high-power beams can be delivered to multiple experiments at once.

Paving the way for fundamental discoveries

The agreement was signed by STFC’s Executive Chair, Professor Mark Thomson and the Director of Fermilab, Dr Nigel Lockyer.

Today’s agreement further strengthens the UK’s collaboration with our US partners in this crucial project, which sits at the heart of a new globally significant facility at Fermilab.

STFC’s continued commitment to the Fermilab neutrino programme will pave the way for fundamental discoveries into the nature of these most elusive particles, and will provide key insights into the origins and evolution of the Universe.

The UK’s involvement in the upgrade has been made possible through the UK government’s £79 million investment in the DUNE experiment, Long-Baseline Neutrino Facility (LBNF), and the new PIP-II accelerator.

This investment, delivered by STFC, has given UK scientists and engineers the chance to take leading roles in the management and development of the DUNE far detector, the LBNF neutrino beam targetry and PIP-II accelerator.

Five nations are collaborating with the US to build the powerful PIP-II accelerator: France, India, Italy, Poland and the UK.

We are grateful for the world-class expertise and contributions of our international collaborators in building a state-of-the-art particle accelerator powering the world’s most intense neutrino beam.

This upgraded technology will drive the next 50 years of global neutrino research in particle physics and the Science and Technology Facilities Council’s contributions will help make this possible.

How the accelerator works

In the UK, STFC will design, build and qualify vital elements of the 215-metre-long particle accelerator, which will accelerate the proton beam to its highest energy.

The main elements currently being developed at STFC’s Daresbury Laboratory are the superconducting cryomodules.

Cryomodules act like a large cool-box. Working at -271°C, they keep the instruments inside, known as Radio Frequency (RF) cavities, cryogenically cooled.

RF cavities store the energy needed to accelerate the proton beam, which when fired into a carbon or beryllium target, will produce a high-intensity beam of neutrinos.

RF cavities are made from a material called niobium, which is both malleable and is superconducting at low temperature. As a result, they become extremely efficient and need very little electrical power to achieve the powerful beam acceleration.

A powerful proton beam striking a target is critical for the study of neutrinos because neutrinos do not interact very often with other particles. This makes them hard to spot, so scientists need to produce lots of neutrinos to detect even one in the massive detectors.

Niobium is a rare metal with only a few sources and suppliers around the world. It is not an easy material to work with, as it reacts with oxygen in the air at high temperatures, especially during the welding process.

STFC has been working closely with industry partner, The Welding Institute (TWI) in Cambridge, which has commissioned the UK’s first Electron Beam Welder able to weld in vacuum the high-purity niobium cavities.

Now 18 months into the project, the STFC Daresbury Laboratory team is making its way through major milestones, including the completion of the cryomodule transport system design.

Once the cryomodules are built, each of them will need to be safely transported to Fermilab in the US. The transport frame has to protect the cryomodule and all of its high-tech components during transportation.

The UK, STFC and Daresbury Laboratory in particular, have a fantastic opportunity to provide cutting-edge accelerator technologies for ‘powering the heart’ of the international flagship project LBNF/DUNE in the USA.

I am immensely proud of how the delivery team at Daresbury, along with our industry partners, have adapted to the challenges faced in developing our leading provision of Superconducting cryomodules for PIP-II.

Top image:  STFC’s Executive Chair, Professor Mark Thomson and the Director of Fermilab, Dr Nigel Lockyer sign the agreement detailing how the organisations will collaborate to build the one of the world’s most powerful linear accelerators. Credit: STFC