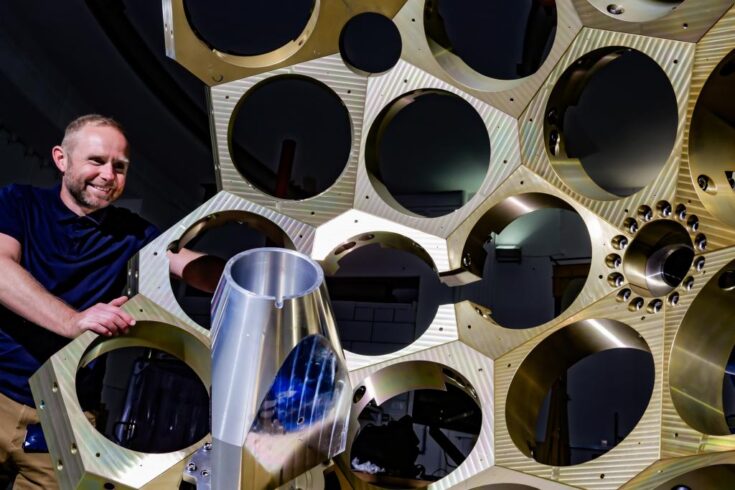 Major international project will solve the most fundamental questions in nuclear physics.

UK scientists are playing a key role in the final stages of the development of a detector designed to solve the most fundamental questions in nuclear physics, such as the origin of the elements in our universe.

The Science and Technology Facilities Council (STFC) has signed a memorandum of understanding (MoU) to fund and support the completion of the Advanced Gamma Tracking Array (AGATA).

AGATA is a major international project, involving over 40 institutions from 12 European countries. It will construct and operate the ultimate gamma ray tracking spectrometer that is a thousand times more sensitive than any previous detector system.

It will produce the most valuable insights yet into the structure of atomic nuclei, with potential applications in many areas, from medical imaging to monitoring the environment.

From space to spectrometer

Atomic nuclei make up most of the visible matter in the universe including unstable nuclei produced by stellar explosions, which can decay in a matter of seconds after forming, into a more stable state.

AGATA can travel to different nuclear research laboratories across Europe, enabling scientists to carry out experiments on extremely powerful beamlines. By accelerating particles and colliding them with stable elements they can produce these elements and study their properties.

AGATA enables them to measure the gamma radiation emitted as they decay, with unprecedented accuracy and efficiency, providing the deepest insights yet into how elements are created.

Under the new MoU, STFC will fund and support the continuing growth of AGATA towards its full completion. This includes an STFC grant to fund researchers from:

This is to provide and optimise the detector systems that will analyse the vast amounts of complex data produced.

Meanwhile, scientists, engineers and technicians at STFC’s Daresbury Laboratory have recently completed the build of the specially designed mechanical structure that will hold, guide and support AGATA’s two and a half tonnes of highly fragile germanium detectors.

A major milestone for AGATA, this mechanical structure has now been transported to the Legnaro National Laboratory in Italy, where it is being installed and commissioned for its next experimental campaign.

The social and economic benefits of AGATA are set to be far reaching, including:

STFC’s new agreement and continued commitment to the AGATA project on behalf of the UK is an exciting next step on our journey to uncover the structure of matter and the secrets of our universe.

The completion of AGATA is a major element of the European long-range plan for nuclear science, and has the real potential to positively impact our economy and lives in so many ways.

It also a prime example of how UK expertise is supporting fundamental research on an international scale. Through continued STFC funding and support, I am very much looking forward to the next stage of this project, towards the completion AGATA.

This is a really exciting point in the path of the AGATA project. The signing of this agreement is a shining example of international cooperation in science, backed up by the government agencies that fund fundamental physics research across Europe.

New accelerator facilities are being developed across Europe to expose the secrets of atomic nuclei, and AGATA will now play a crucial part in that quest over the next decade, and beyond.