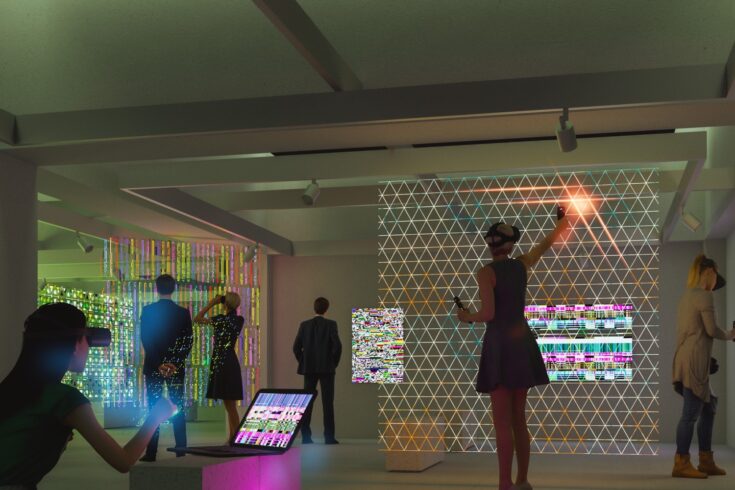 The Arts and Humanities Research Council (AHRC) has awarded 12 new grants as part of its partnership with the US National Endowment for the Humanities (NEH).

These exciting research projects bring together teams from the UK and US to advance the use of digital tools and methods in:

They are the second round of grants awarded as part of the NEH AHRC New Directions for Digital Scholarship in Cultural Institutions scheme.

Equipping cultural institutions for the future

The funded projects will explore how digital innovation can transform the function of cultural institutions and the ways in which culture and heritage is experienced.

This will enable them to respond to the challenges of the 21st century.

For example, they will help to:

The projects include a collaboration between Lancaster University and Rice University in the US to develop the Digital Archive of the Atlantic Slave Trades (DAAST).

The archive is an open-access resource that will digitise, transcribe and translate 30,000 pages of records to deepen our understanding of one of the largest slave trading companies in history.

Another project, led by the University of Westminster and University of Michigan, will work with traditionally marginalised groups to train museum practitioners in the use of digital audio description tools.

The tools improve the accessibility of cultural collections for blind, partially blind, and sighted audiences.

We are proud to continue this exciting collaboration with NEH.

This collaboration connects leading institutions in the US and the UK to pioneer ground-breaking new research methods, and lead world class research and innovation in digital humanities.

These projects will open up heritage and culture in new ways that benefit both researchers and the public and bring a wealth of fascinating collections into the 21st century and in ever more accessible ways.

NEH is pleased to be able to continue our partnership with AHRC to support scholars working to develop innovative new techniques and strategies for sharing and studying cultural collections.

These 12 newly funded projects will expand access to important historical sites and records around the globe, foster international collaboration, and further research into digital technologies that will bring humanities materials to new audiences.

The recipients of the newly awarded NEH AHRC New Directions for Digital Scholarship in Cultural Institutions grants are:

Towards an integrated colonial archive: humanities, law and British indentureship

This project aims to provide proof-of-concept for the development of an integrated humanities, law and social science archive.

The project can provide an accessible and engaging archive that establishes greater public interest and engagement in the history of indentureship, and generates new interdisciplinary scholarship on colonialism.

It can do this by overlapping and digitally integrating holdings on the indentureship period that would not typically be read or viewed alongside one another, such as:

The core research inquiry of this project is to investigate the combination of immersive technologies and immersive performance as tools for decolonisation, that has the potential to attract diverse, 21st century audiences.

The project will design and develop two immersive heritage experiences.

It will combine mixed reality, in the form of smart glasses, and live performance at heritage sites in the UK and US.

It will focus on under-represented stories from 18th century enslaved and freed slave populations living in London and Deerfield, Massachusetts.

Digital storytelling on African urbanisms: a model to empower education initiatives across the global south

This project explores how to best empower secondary school and university educators and learners in the global south to develop digital story telling in low resource environments.

This is done through the use of a case study carried out in South Africa and Botswana where learners and educators will explore cultural heritage through a digital archive called metsemegologolo (‘ancient towns’ in Setswana).

The digital tools for the metsemegologolo archive will be a model for other digital storytelling initiatives across the global south.

Finding a place: advancing digital methods to unlock the use of digitised book illustrations in cultural institutions

Historical book illustrations are rarely used or analysed in cultural institutions, even though digitised collections of illustrations exist in libraries and are accessible online.

Computational tools will be used to identify a significant subset of book illustrations of places and people from a core digitised collection of illustrated books from the British Library.

This will enrich its searchability and relevance.

The project will use computer vision to interrogate iconographic similarities and divergences, effectively charting the construction, transformation, and subversion of visual ‘stereotypes’.

This project aims to re-centre the global history of Indian and Indian-imitation textiles in the 18th and 19th centuries from White Euro-American markets to African-diasporic American markets.

As an open-access, born-digital project, scholars working around the world will be able to easily conduct cross-collection research from the project’s metadata.

They can also use the model for translations between distinct institutional schemas in future research projects connecting similar collections.

University of Edinburgh and Yale University

Exhibitions are difficult to study because we lack holistic, structured data about co-exhibited objects and the participation of visitors.

This project uses linked open data and artificial intelligence to reconcile descriptions of the same object in different systems at different institutions (including newspapers and social media).

This project will develop a reciprocal, consultative model for collaborative digital decolonising of indigenous materials.

The aim is to:

Towards a digital archive of the Atlantic slave trades: unlocking the records of the South Sea Company

This project aims to democratise access to the archives of the Atlantic slave trades by employing innovative digital methods.

It will create the DAAST, an open-access digital resource that will enable users to access enormous quantities of manuscript material drawn from libraries around the world.

Those records will be made comprehensible by using handwritten text recognition and machine translation technologies.

This project uses three case studies to explore the best use of digital handwritten text recognition tools for cultural institutions.

The first case study looks at the diaries, letters, and photographs of 19th to 20th century British explorer and archaeologist Gertrude Bell.

The second case study investigates a variety of sources at the Bucknell University Special Collections in multiple languages including Nahuatl and Vietnamese.

A key challenge faced by digital text projects is encouraging cultural institutions, researchers and the wider public to reuse and build upon their resources.

One of the chief impediments has been that texts are produced and stored in formats that are hard to reuse.

This project aims to rectify this situation by defining an interoperable text framework for accessing and delivering textual resources that are both readable by humans and also machine-friendly for computational analysis. It will also implement test cases to demonstrate its strengths.

SOAS University of London and Trustees of Princeton University

A digital repatriation of a lost archive of the Spanish Pacific: the library of the Convent of San Pablo (Manila, 1762)

From 1607 to 1762, the library of the Convent of San Pablo in Manila was a repository of more than 1,500 rare manuscripts, maps and early printed materials.

The material relates to the Philippines and other regions of Asia the Spanish missionaries hoped to convert to Christianity.

During the British siege of Manila, the treasures of the Convent of San Pablo were ransacked and its library collection pillaged.

This project will piece together a virtual reconstruction of the materials in the library as close to as it might have been in 1762 by using:

This research will examine how museums can transform the way that they think about and create digital audio interpretation for their collections, to enhance inclusion and access for all audiences.

For people who are blind or partially blind, audio description (AD) is traditionally described as a verbal narrative for information available through vision.

This project will develop a model to give museums a streamlined way to create new AD, extending their digital provision and boosting inclusion.