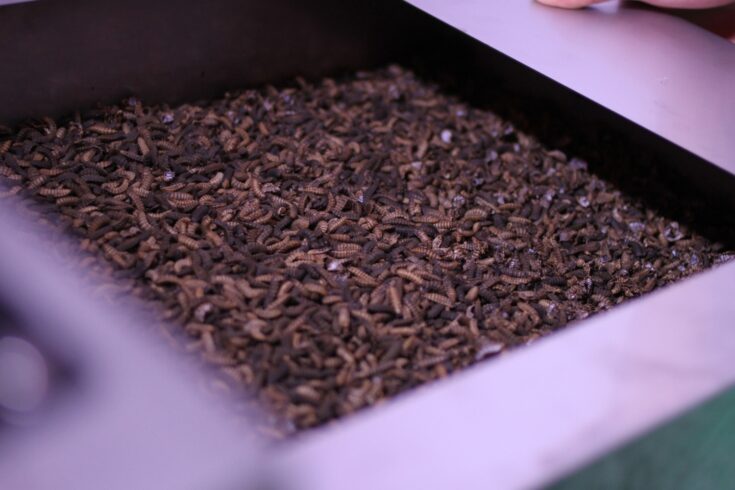 The UK’s first large-scale farm that will use insects to convert food waste into sustainable feed for farmed animals has moved a step closer, thanks to a £10 million government funding boost.

By 2050, our global population is set to exceed nine billion, bringing with it an anticipated 70% increase in global demand for meat and fish.

As a result, the growing demand for soya-based farm feed is driving mass deforestation at an alarming rate, and marine populations have halved in the last four decades due to widespread overfishing.

With £10 million funding, part of the Government’s Industrial Strategy Challenge Fund, a start-up company Entocycle is leading a collaboration that will build the UK’s first industrial-scale insect farm.

Black soldier flies are used to convert upcycled food waste from farms and factories into a sustainable, organic insect-based protein feed, as an alternative to soya, for farmed animals, namely pigs, chicken and fish.

In short, the company is using food waste to create insect protein to feed the animals that we eat, while reducing carbon dioxide emissions and deforestation.

Following its formation in 2017, Entocycle spent time developing its technology as part of the European Space Agency Business Incubation Centre United Kingdom (ESA BIC UK), which is managed and partly funded by STFC in collaboration with:

Entocycle acquired the expertise to develop a network of cutting edge sensors, originally designed for use in space, to monitor and optimise the black soldier fly lifecycle.

They combined this with big data analysis to develop their proprietary technology to mass-rear flies, scalable for industrial use.

Furthermore, access to STFC’s Rutherford Appleton Laboratory (RAL) space expertise enabled it to move past the prototype stage, which it would not have had the ability to do as a small team at the time.

Entocycle is a first-class example of how space technology can be applied to address one of the most important global challenges we currently face – how to feed the world without harming our planet.

It is fantastic to know that the ESA BIC UK, part of the world’s largest business incubation programme for space tech start-ups, was able to provide the right environment and support to play a part in the early development of this world-changing technology.

This is a significant milestone for Entocycle as it seeks to make a real and positive impact on making our food supply chains more environmentally sustainable.

I wish the team the very best of luck in this important and exciting development.

Part of the ESA Space Solutions network of successful ESA BICs across Europe, the ESA BIC UK is a UK-wide programme, incorporating:

It provides up to 15 start-ups every year with a combination of funding and access to world leading technical expertise, facilities and business development support.

Further information about how the ESA BIC UK can support your business, and how to apply, is available online.