Webb reveals details of ‘messy death’ of a dying star 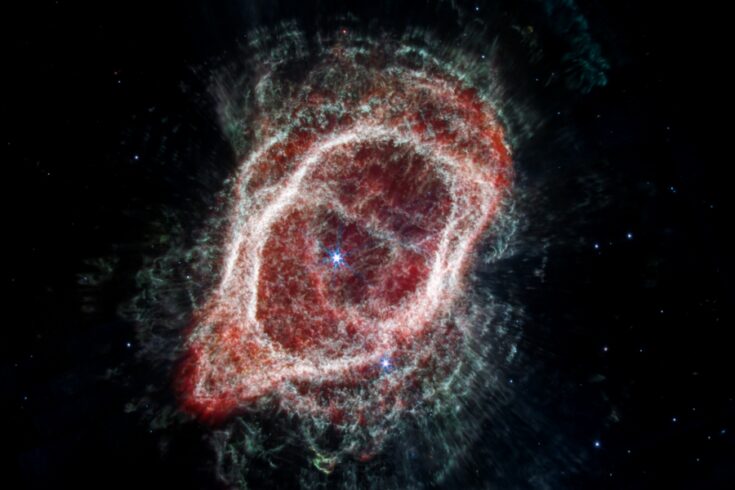 Images from the James Webb Space Telescope (JWST) offer new insights into the death of stars.

Using JWST, astronomers have peered through cosmic dust to reveal the details hidden within the Southern Ring Nebula.

The nebula is a cloud of gas and dust expelled by a dying star approximately 2,500 light-years away from Earth.

Colourful clouds of gas and dust

By combining images from JWST’s Mid-Infrared Instrument (MIRI) and its Near Infrared Camera (NIRCam), researchers have found at least 2 never before observed stars within the nebula.

They may have contributed to the complex shapes of its colourful clouds of gas and dust.

The new study published in Nature Astronomy also reveals that the central star was nearly 3 times the mass of the Sun before it ejected its layers of gas and dust.

Knowing the initial mass is a critical piece of evidence that helped the team of almost 70 researchers to:

With JWST, it’s like we were handed a microscope to examine the Universe.

There is so much detail in its images.

We approached our analysis much like forensic scientists to rebuild the scene.

The data shows that the ageing star at the centre of the nebula sloughed off its layers of gas and dust over thousands of years to form the stunning image.

Before the dying star shed its layers, the team proposes that it interacted with 1 or even 2 smaller companion stars.

During this intimate ‘dance’, the interacting stars may have launched 2-sided jets, which appeared as roughly paired projections that are now observed at the edges of the nebula.

These findings are yet more proof that JWST’s instrumentation is a brilliant feat of engineering able to show astronomical formations in never-before-seen detail.

These results show how MIRI and NIRCam images combined provide stunning detail and even more data to help us to further understand the life and death of stars.

This work is only possible because of a vast international collaboration between scientists, astronomers, engineers, technicians and researchers globally.

Authors from 4 UK institutions are involved in the new study as part of the international team:

Their contributions are connected to the discovery of a dusty disk around the central star, determining the mass of the central star and analysing the complex shapes in the nebula.

Dr Mikako Matsuura, one of the authors of the article from Cardiff University, said:

The JWST molecular hydrogen image of the Southern Ring Nebula is breathtaking.

This simple observation is broken by these JWST’s images, which show a lot of knots, spikes and filaments across the nebula.

When new JWST infrared images of the Southern Ring Nebula were released, we also immediately realised that 1 of 2 stars is the actual central star, and its dust emission is most likely in the shape of a disk.

Because these 2 stars are so close together on JWST images, Dr Matsuura had to carefully detangle which part of the light is coming from which star.

This way, the size and mass of the dusty disk can be determined as accurately as possible.

When a star is dying, it produces a lot of stellar wind containing dust and gas.

This central star happens to have a binary companion and probably 2 more stars within the system.

Dust expelled from the central star is trapped around the binary companion and formed a dusty disk, an analysis led by Professor Albert Zijlstra from The University of Manchester.

This study opens the door to a much better understanding of how stars like the Sun die.

JWST has a unique power to show details of the nebulae which even Hubble could not see.

JWST shows that the death of a star can produce beauty, and science.

The University of Manchester also had a role in the determination of the original mass of the star, the most accurate ever for a planetary nebula.

The world’s most powerful space telescope

The JWST is the world’s leading space science observatory.

After its successful launch on Christmas Day in 2021, JWST is now preparing to solve the mysteries of the Universe.

Over the next decades, JWST will look beyond to distant worlds around other stars and probe the mysterious structures and origins of our Universe and our place in it.

The Science and Technology Facilities Council has helped JWST’s endeavour by leading the design, creation and testing of MIRI, in partnership with the UK Space Agency.

MIRI is 1 of 4 main instruments on the JWST that enable it to see and measure light.

MIRI was developed through a 50-50 partnership between the National Aeronautics and Space Administration (NASA) and the European Space Agency (ESA).

NASA’s Jet Propulsion Laboratory (JPL) led the US efforts for MIRI, and a multi-national consortium of European astronomical institutes contributed for ESA’s involvement:

The MIRI cryocooler development was led and managed by JPL, in collaboration with: