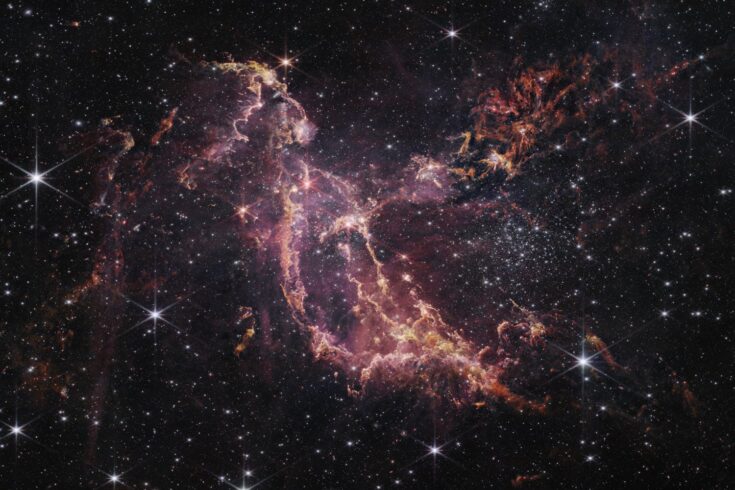 Studies on the Small Magellanic Cloud have revealed new insights into star and planet formation.

The James Webb Space Telescope (JWST) has revealed new insights into star and planet formation by studying NGC 346. It is one of the most dynamic star-forming regions located in the Small Magellanic Cloud (SMC) over 200,000 light years from Earth.

The SMC is of particular interest to astronomers. This dwarf galaxy resembles the conditions of the early Universe, just 2 or 3 billion years after the Big Bang, known as ‘cosmic noon’, when star formation was at its peak.

More detail than ever before

Studying young protostars is the best way to understand how stars formed. Previous infrared studies of NGC 346 focused on protostars heavier than about 5 to 8 times the mass of our Sun, but JWST allows astronomers to study galaxies in more detail than ever before.

With Webb, we can probe down to lighter-weight protostars, as small as 1 tenth of our Sun. This is the first time we can detect the full sequence of star formation of both low and high mass stars in another galaxy. This means we have far more data to study at high resolution, offering us new information on how the birth of stars shapes their environment and even greater insight into the star formation process.

Margaret Meixner, an astronomer at the Universities Space Research Association, and principal investigator of the research team, said:

A galaxy during cosmic noon wouldn’t have one NGC 346 like the SMC does; it would have thousands of star-forming regions like this one. But even if NGC 346 is now the one and only massive cluster furiously forming stars in its galaxy, it offers us a great opportunity to probe conditions that were in place at cosmic noon.

As stars form, they gather gas and dust, which can look like ribbons in JWST imagery, from the surrounding molecular cloud. The material collects into an accretion disk that feeds the central protostar. Astronomers have detected gas around protostars within NGC 346, but JWST’s near-infrared observations mark the first time they have also detected dust in these disks.

Guido De Marchi of the European Space Agency (ESA), a co-investigator on the research team said:

We’re seeing the building blocks, not only of stars, but also potentially of planets. And since the SMC has a similar environment to galaxies during cosmic noon, it’s possible that rocky planets could have formed earlier in the Universe than we might have thought.

JWST is the world’s premier space science observatory. Webb will solve mysteries in our solar system, look beyond to distant worlds around other stars, and probe the mysterious structures and origins of our universe and our place in it. Webb is an international program led by NASA with its partners, ESA and the Canadian Space Agency.

The UK is playing a major role by leading the European Consortium. The UK, partnered with US institutes, designed, built and tested one of the 4 main science instruments, the Mid-Infrared Instrument (MIRI), backed by UK government funding.

MIRI was developed through a 50-50 partnership between NASA and ESA. The Jet Propulsion Laboratory (JPL) led the US efforts for MIRI and a multinational consortium of European astronomical institutes contributed for ESA.

George Rieke with the University of Arizona is the MIRI US science team lead.

Alistair Glasse with UK ATC is the MIRI instrument scientist, and Michael Ressler is the US project scientist at JPL.

The MIRI cryocooler development was led and managed by JPL, in collaboration with NASA’s Goddard Space Flight Center in Greenbelt, Maryland, and Northrop Grumman in Redondo Beach, California.