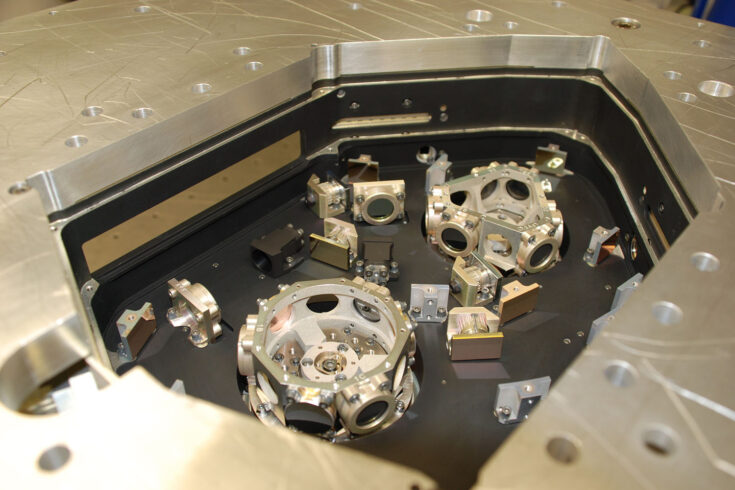 The UK’s main contribution to the James Webb Space Telescope, the Mid-Infrared Instrument (MIRI), has now opened its eye to the sky.

This is a remarkable achievement for the hardworking scientists and engineers who have worked tirelessly to get to this point. MIRI is an incredible feat of engineering.

Watching MIRI come to life is inspiring, and is a testament to the talent of the UK teams involved.

NASA has confirmed that the telescope alignment is complete using the measurements from all four of the science instruments. This means MIRI is now receiving focused light from the telescope and taking astronomical images for the first time.

MIRI was the last instrument to become functional on Webb as it operates at lower temperatures than the other instruments, so had to be carefully cooled to 7 kelvin (-266 Celsius).

After confirming that the instrument systems were functional at this extremely cold temperature the MIRI cover was opened and the first data obtained.

MIRI does not make its own internal adjustments for focus or alignment. Instead it relies on the incredible accuracy of the Webb optical alignment and the high-precision assembly of MIRI optics by European partners.

As the only mid-infrared instrument on Webb, the MIRI optics are complicated to align because they have to provide four scientific functions in a small space:

The painstaking and long telescope alignment process was supported by scientists and engineers from the Science and Technology Facilities Council’s (STFC) UK Astronomy Technology Centre (UK ATC) and RAL Space. The process was also supported by a team of international MIRI partners.

Supporting the analysis of MIRI’s alignment

I was up until 01:00 with colleagues in France, talking to the Webb alignment team in the US, to support the analysis of MIRI’s alignment to the telescope.

After working on MIRI for so many years it was great to finally reach this stage in the project and see that the images are well focused.

I was on shift as the first images arrived and had a friendly race with my European colleagues to see who could display them first. I lost the race, but was absolutely delighted with what I was seeing on their screens.

To see those images together with my colleagues was immensely gratifying after so many years working in partnership.

This is a key milestone in Webb’s science mission as it means that all the instruments, including MIRI, are now able to take super sharp, sensitive astronomical images and spectra.

The European contribution is led by Professor Gillian Wright, Director of STFC’s UK ATC in Edinburgh, she said:

Another fantastic moment in MIRI’s amazing journey. The team is delighted that the coolest instrument on Webb is now also aligned to Webb’s mirrors and functioning.

Using MIRI, we will be able to observe the infrared universe in a way that has never been possible before. There are still several months of detailed testing and calibration to go before we see the first science from MIRI, but this is tremendous news and a real achievement for the entire MIRI team.

It was the first of Webb’s instruments to be delivered to NASA in 2012, where it was integrated into the larger telescope with continuous testing at every stage.

Webb launched on board ESA’s Ariane 5 rocket from French Guiana on Christmas Day 2021. It then spent a month travelling through space before reaching its new home in orbit one million miles from Earth.

The commissioning team have spent the intervening weeks working on aligning the 18 mirror segments and cooling down the scientific instruments.

Scientists and engineers from STFC’s UK ATC and RAL Space are actively involved in the complex commissioning process. Working alongside international colleagues at the Space Telescope Science Institute in Baltimore, they monitor and command MIRI and Webb in shifts, 24 hours a day.

MIRI can see at longer wavelengths than the other instruments on Webb, and is capable of peering through the dust clouds that surround newly formed stars and planets.

By looking at infrared radiation, the Webb instruments including MIRI can effectively look back billions of years in time to study the very beginnings of the universe.

The largest most powerful telescope

MIRI is one of four scientific instruments on Webb, the largest most powerful telescope ever launched into space.

Webb’s mission to explore the universe is led by:

MIRI is an international project that was designed, built and tested by a European consortium of ten member countries, led by the UK in partnership with NASA JPL.

To enable MIRI to take images required a truly international effort. The spectrometer channel requires light coming from input optics developed in Belgium entering UK ATC-built image slicers and pre-optics, feeding into a spectrometer developed in the Netherlands and landing on a US detector.

Similarly the imager channel is fed light from the same input optics, with light going into camera optics developed in France.

Inside the camera there is a filter wheel mechanism, that was developed in Germany. This precisely places into the beam a selection of colour filters, masks for the coronagraphs, or a prism for low resolution spectroscopy. Finally the light arrives perfectly in focus at another US provided detector.

All of that light has arrived in position, in focus.

All of MIRI is held correctly in position relative to the telescope by a thermally isolating hexapod developed in Denmark. Although it is an engineering image for the telescope alignment, these first measurements have also provided the MIRI team with some preliminary information about the flight instrument.

The MIRI development has been funded by the UK Space Agency and STFC, part of UK Research and Innovation, and ESA.

Revolutionising our understanding of the universe

MIRI and the other instruments on Webb will revolutionise our understanding of the universe. This is due to the skills, expertise and dedication of scientists and engineers from across the UK, which will put British science at the forefront of the exciting new discoveries set to be made by Webb over the next decade.

Over the next few months each instrument will undergo final calibration. MIRI’s systems will be tested, data will be analysed, and final adjustments will be made before we see the first spectacular images of the cosmos from Webb this summer.

MIRI was developed as a 50-50 partnership between Europe and USA. JPL leads the US efforts for MIRI with George Rieke, University of Arizona as the science lead. Gillian Wright (UK ATC) is the European Principal Investigator.

The MIRI cryocooler development was led and managed by JPL and the focal plane systems (detectors and signal chain electronics) and the flight software that operates all the components were also provided by JPL.

The MIRI Instrument Scientist is Alistair Glasse (UK ATC), and the US Project Scientist is Michael Ressler (JPL). The Project Manager in the USA is Analyn Schneider (JPL) while Laszlo Tamas (UK ATC) manages the European Consortium.

The roles shared between the UK institutions in the MIRI partnership is listed below.

Chalmers University of Technology led the Swedish contribution of dichroics and filters and DIAS led the Irish provision of filters and dichroics.

CEA led the French contribution of the MIRI imager sub-system and coronagraphs development.

The University of Leiden led the Dutch contribution of the spectrometer main optics subsystem and gratings development.

ETH (PSI) led the contamination control cover and its mechanism, and the electrical harnesses in Switzerland.

MPIA led the German contribution of the wheel mechanisms for both the imager and spectrometer, and also provided leadership of the electrical design.

The University of Cardiff led the on-board calibration light sources.

CSIC led the Spanish provision of the telescope simulator used to test the instrument science performance.

All the MIRI partners have key roles in preparing the commissioning and calibration of the instrument and support post-launch verification.

More about Webb in the UK

The MIRI team is not the only contribution made by the UK to Webb. Two senior academics were appointed by ESA to the NIRSpec Science Team and will have major roles in the early science with this ESA provided instrument.

Several UK universities and companies were awarded subcontracts for development of critical components through ESA, NASA and the lead MIRI institutes.

STFC has appointed three Webb fellows in the UK with leadership roles in first science programmes including studies of our solar system, interstellar dust and high redshift galaxies and to support outreach.