World-first use of base-edited cells to treat ‘incurable’ leukaemia 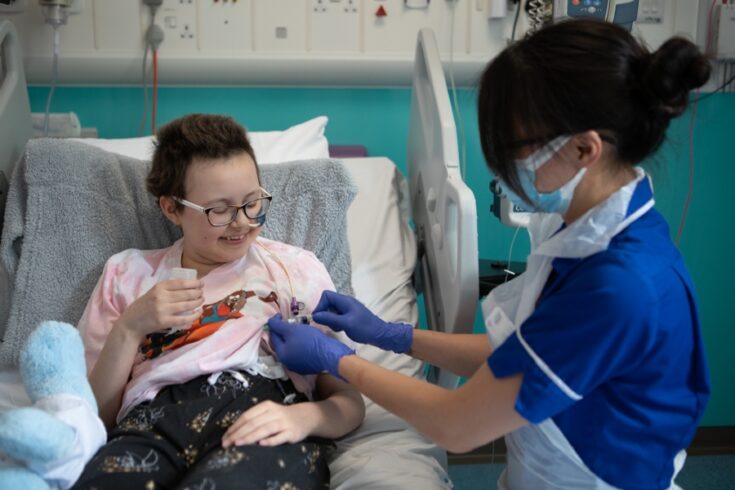 A patient with ‘incurable’ T-cell leukaemia has been treated with base-edited T-cells in the world’s first reported use of a base-edited therapy.

The patient, 13-year-old Alyssa from Leicester, was diagnosed with T-cell acute lymphoblastic leukaemia in 2021.

She was treated with all current conventional therapies for her cancer, including chemotherapy and a bone marrow transplant, but unfortunately her disease came back and there were no further treatment options.

Alyssa was the first patient to be enrolled onto a new clinical trial funded through the Medical Research Council’s (MRC) Developmental Pathway Funding Scheme.

The scheme aims to drive fundamental discoveries stemming from MRC’s research boards and the wider academic community along the developmental pathway towards patient benefit and or commercialisation.

The CAR T-cells originally came from a healthy donor.

These cells had been edited using new base-editing technology to allow them to hunt down and kill the cancerous T-cells without attacking each other.

In remission after 28 days

Just 28 days later, she was in remission and went on the receive a second bone marrow transplant to restore her immune system.

Now, 6-months post-BMT, she is doing well at home recovering with her family and continues her post-BMT follow-up at GOSH.

Without this experimental treatment, Alyssa’s only option was palliative care.

Researchers are presenting the data for the first time at the American Society of Haematology annual meeting in New Orleans, US, this weekend.

The use of CAR T-cells to treat B-cell leukaemia was reported by GOSH in 2015.

However, it’s been more difficult to treat T-cell leukaemia in this way. This is because T-cells designed to recognise and attack cancerous T-cells also end up killing each other during the manufacturing process in the lab.

Multiple additional changes have now been added by the GOSH team to generate banks of ‘universal’ anti-T-cell CAR T-cells.

First patient in the world

Alyssa is the first patient in the world reported to have received a base-edited cell therapy and is currently at home recovering from her treatment.

Alyssa and her family are feeling positive that the leukaemia is now undetectable, but know she will need to be monitored closely for some time.

Alyssa, 13, has always been at the centre of decisions about her care. She said:

Once I do it, people will know what they need to do, one way or another, so doing this will help people.

Of course I’m going to do it.

Alyssa was diagnosed with T-cell leukaemia in May 2021, after a long period of what the family thought were colds, viruses and general tiredness.

She was treated in hospitals in Leicester and Sheffield with standard therapies, chemotherapy and a bone marrow transplant. But unfortunately the teams were unable to get her cancer under control and into remission.

With the only other option as palliative care, Alyssa and her family extensively discussed this clinical trial with the BMT and CAR T-cell therapy experts at GOSH.

They then undertook the decision to be the first to try an experimental treatment for her leukaemia.

All of this needs to have been for something

The doctors have said the first 6 months are the most important and we don’t want to get too cavalier but we kept thinking ‘If they can just get rid of it, just once, she’ll be ok.’ And maybe we’ll be right.

Alyssa is very mature and you can forget she is just a child but hopefully this can prove the research works and they can offer it to more children.

All of this needs to have been for something. It just feels so senseless. Now we are trying to live between appointments.

Alyssa wants to go back to school and that could be a reality soon. She’s already teasing her brother as he has had to go back for autumn term.

We’re on a strange cloud 9 to be honest. It’s amazing to be home.

This is a great demonstration of how, with expert teams and infrastructure, we can link cutting edge technologies in the lab with real results in the hospital for patients.

It’s our most sophisticated cell engineering so far and paves the way for other new treatments and ultimately better futures for sick children.

We have a unique and special environment here at GOSH that allows us to rapidly scale up new technologies and we’re looking forward to continuing our research and bringing it to the patients who need it most.

Clinical trial open to up to 10 patients

The clinical trial for this treatment is currently open and aims to recruit up to 10 patients with T-cell leukaemia who have exhausted all conventional treatment options.

If shown to be widely successful, the BMT and CAR T-cell therapy teams at GOSH hope it can be offered to children earlier in their treatment journey when they are less sick.

Further applications for other types of leukaemia are anticipated in 2023.

Since Alyssa got sick with her leukaemia in May last year, she never achieved a complete remission.

Not with chemotherapy and not after her first bone marrow transplant.

Only after she received her CD7 CAR T-cell therapy and a second bone marrow transplant in GOSH she has become leukaemia free.

This is quite remarkable, although it is still a preliminary result, which needs to be monitored and confirmed over the next few months.

The entire team hereat GOSH are extremely happy for Alyssa and her family and it’s been a privilege to work with them over the past few months.

We have been very impressed by how brave she is and nothing makes me happier than seeing her outside the hospital, going back to a more normal type of life.

We are delighted to hear of the promising results of this treatment and the hope it has provided for Alyssa and her family.

Advanced therapies (medicines based on genes, tissues or cells) have the potential to transform the lives of those with difficult to treat diseases and remain a priority for MRC.

If replicated, this ‘off the shelf’ universal cell therapy will mark a huge step forward in these types of therapies providing life-changing benefits to more patients.

Support for the broader research programme also comes from:

To create these cells, healthy donor T-cells, arranged by the Anthony Nolan registry, were subjected to 4 separate ‘edits’ in the lab, before being armed to attack other T-cells.

These edits were achieved by ‘base editing’, chemically converting single nucleotide bases (letters of the DNA code) which form a sequence that provides instructions for a specific protein.

For example, changing specific nucleotide bases in the gene for CD7 from a cytosine to a thymine creates a ‘stop codon’, the equivalent of a genetic full stop. This prevents the cell machinery reading the full instructions and production of CD7 is terminated.

The result is edited CAR T-cells that can be given to the patient so that they rapidly find and destroy T-cells in the body, including leukemic T-cells. If successful, the patient then receives a bone marrow transplant to restore their depleted immune system.

Previous treatments have relied on techniques called transcription activator-like effector nucleases (TALENS) or CRISPR Cas9 to deliver changes to genes through cuts made by molecular ‘scissors’.

The new base editing approach acts without causing breaks in the DNA, allowing more edits, with less risks of unwanted effects on chromosomes.

The technique is also being investigated to try and correct harmful changes in DNA code for a variety of inherited conditions.